Today, flat-panel displays (FPDs) and imagers (FPIs) based on thin-film electronic devices are widely used in our daily lives, e.g. TVs and imagers. Current FPD and FPI industries are dominated by the more than 30 years old amorphous silicon (a-Si:H) thin-film transistor (TFT) active-matrix arrays. However, the low field-effect mobility (~0.5 cm2/Vs) of the a-Si:H TFTs is not adequate for next generation super high definition, e.g. 8k × 4k, fast frame rate (> 240 Hz) displays. As an alternative to a-Si:H TFTs, low-temperature polysilicon (LTPS) TFTs have been widely used for small area, active-matrix organic light emitting displays (AM-OLEDs). LTPS technology achieves high field-effect mobility ranging from 50 to 100 cm2/Vs to drive organic-light emitting devices (OLEDs) used for small area FPDs, but it is very difficult to realize LTPS active-matrix arrays over large area substrates with an acceptable manufacturing yield. Also current medical imagers based on passive pixel sensor (PPS) technology suffer from the limited resolution, a low frame rate, and a high electronic noise owing to the low-mobility of the a-Si:H TFTs.  Hence, there is a critical need to develop TFT active-matrix array technology that can achieve a high field-effect mobility and has a low noise that is suitable for a large area fabrication process with the acceptable yield using existing a-Si:H TFT manufacturing infrastructure. All fabricated devices must be electrically stable during operation and over time.

Amorphous oxide TFTs that can be fabricated by DC sputtering method, such as amorphous In-Ga-Zn-O (a-IGZO) TFTs with a field-effect mobility higher than 10 cm2/Vs, have been extensively studied since 2004 and demonstrated its potential use for ultra-high definition (UHD), e.g. 4k × 2k, FPDs. Both electrical stability and an acceptable manufacturing yield still need to be demonstrated for these devices. Another interesting metal oxide is DC sputtered amorphous In-Sn-Zn-O (a-ITZO) TFTs that boost even higher field-effect mobility (> 30 cm2/Vs), a low threshold voltage and low noise; carrier mobility > 30 cm2/Vs is required for super high vision FPDs operating at high refresh rates. To investigate the device properties of a-ITZO TFTs, an analytical field-effect mobility model has been proposed and key parameters have been extracted using different approaches. The device SPICE model was also developed to help out with the circuits design. During this study, it was demonstrated that good device performance can be realized through the a-ITZO channel thickness and oxygen gas flow ratio optimization. The bias-temperature stress induced electrical instability was evaluated to demonstrate stable operation of the a-ITZO TFTs. The obtained results demonstrated that, in comparison to a-IGZO TFTs, higher electrical performance and better electrical stability can be achieved using a-ITZO TFTs.

The new a-ITZO TFT technology combines the advantages of both the a-Si:H TFTs for large area mass production and the LTPS TFTs for high mobility. The finding of this work is significant in understanding the a-ITZO TFT device physics and optimization of the fabrication process to realize high production yield. The high field-effect mobility a-ITZO TFTs are very promising for large area, fast frame rate active-matrix liquid crystal displays (AM-LCDs) and AM-OLEDs. It also provides possible avenue for development of active pixel sensor (APS) a-ITZO TFT active-matrix arrays for next generation medical high-resolution imaging applications such as digital tomosynthesis and computed tomography. The a-ITZO TFT APS can achieve a large charge gain on the pixel circuit level to amplify the input signal and minimize the electronic noise. In summary, we would expect breakthroughs in both the flat-panel display and imager industries using the new a-ITZO TFT technology in the near future. 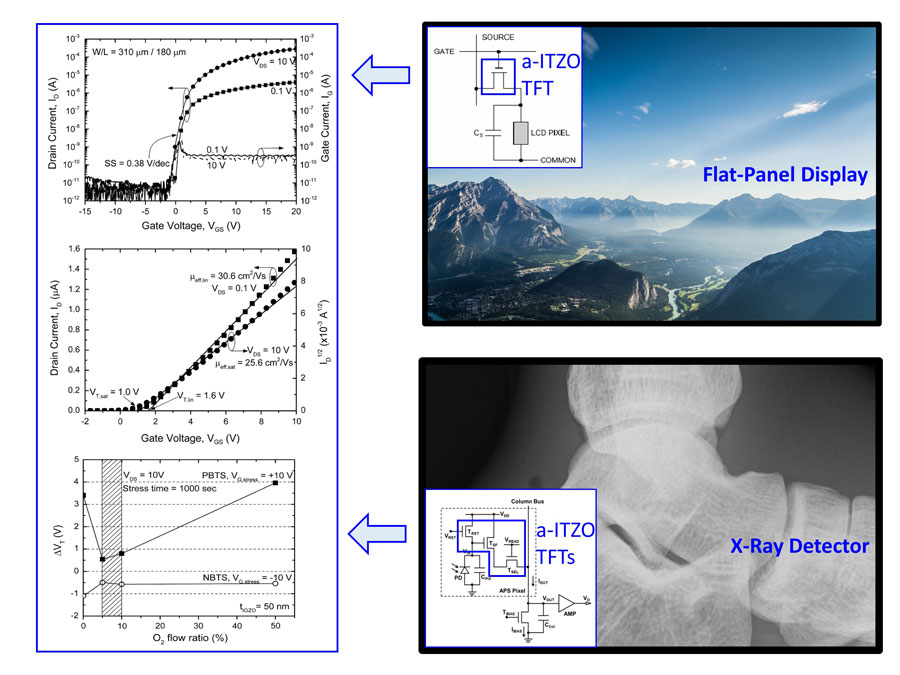 Chumin Zhao received his B.S. degree in Applied Physics (First Honor) from Hong Kong Baptist University, Hong Kong in 2012 and M.S. degree in Electrical Engineering and Computer Science from the University of Michigan in 2014, where he is currently pursuing a Ph.D. degree working as a graduate student research assistant and instructor. In the summer 2016, he had internship experience working as a display electrical engineer at Apple Inc. During his Ph.D. study, he has been involved with multiple projects including device characterization and simulation of amorphous oxide (a-InGaZnO and a-InSnZnO) thin-film transistors (TFTs), amorphous oxide TFT active pixel sensor (APS) circuits for medical imaging applications, and imaging performance evaluation and modeling of complementary metal-oxide-semiconductor (CMOS) APS x-ray imagers for digital tomosynthesis.

Mitsuru Nakata received the B.E., M.E., and Ph.D. degrees from Tokyo Institute of Technology, Tokyo, Japan. In 2001, he joined the Central Research Laboratories, NEC Corporation, Kawasaki, Japan, where he was engaged in the research and development of polycrystalline silicon and oxide semiconductor thin-film transistors (TFTs). Since 2010, he has been with the Science & Technology Research Laboratories, Japan Broadcasting Corporation (NHK), Tokyo, Japan, where he has been engaged in research on oxide semiconductor TFTs and flexible displays.

In 1994 he moved from IBM Research Division to the University of Michigan as a Professor in the Department of Electrical Engineering and Computer Science. At The University of Michigan from 1994 to 2000, he did leading work on various flat panel displays technologies. From 2000 to 2008 he was doing research related to organic and molecular electronics. From 2008 he is mainly interested in metal oxide semiconductors based devices for displays and detectors.

From 2002 to 2003, he spent a sabbatical year at the Center for Polymers and Organic Solids (Physics Department), University of California, Santa Barbara conducting research in area of the conducting polymer devices.

From 2009 to 2010, he spent a sabbatical year at the California Institute for Telecommunications and Information Technology, University of California, San Diego doing research in area of inorganic solar cells and chemical sensors based on organic thin-film transistors.

Dr. Kanicki presented numerous invited talks at national and international meetings in area of the organic and inorganic semiconductor devices. More information about his research group activities can be found at www.eecs.umich.edu/omelab/.