The development of supersonic aircraft has recently attracted much attention. Recent research findings have, however, revealed the difficulty in the realization of hypersonic flights using currently available aircraft construction materials due to high thermal loads. In line with the above, aircraft engine cooling has been deemed necessary and active regenerative cooling technology has been identified as a promising solution. One major challenge with this technology is the non-uniform flow distribution, otherwise known as static instability, caused by the characteristics of fuel and small channels. It is characterized by unbalanced thermal stress and a reduction in the material heat carrying capacity that is a great threat to light safety. To meet the design requirements of regenerative cooling, thorough understanding of the hydrodynamic characteristics of fuel is a prerequisite.

To this note, Tianhui Li (Ph.D. Student), Professor Zhuqiang Yang and Professor Bo Zhang from the Dalian University of Technology presented a comparative analysis of hydrodynamic characteristics in vertical and horizontal flows through a series of supercritical hydrocarbon fuel flow experiments. Specifically, they investigated the buoyancy effect on multi-valued hydrodynamic characteristics and the onset of flow stability of cyclohexane. Their work is currently published in the research journal, Experimental Thermal and Fluid Science.

In brief, the experiment was carried out in varied operating conditions and comprised of mini-tubes with inner diameters of 1mm and 2mm. Next, the effect of buoyancy on the onset of flow instability was examined in different directions based on a near-wall fluid forces analysis. Finally, an empirical correlation for prediction of onset of flow instability in supercritical fluids was obtained through dimensional analysis.

Hydrodynamic characteristics were evident in both vertical and horizontal tubes in supercritical fluids. Horizontal flow reported larger values than vertical flow as far as the negative slope of the hydrodynamic curve and the mass flow rate corresponding to the onset of flow instability were concerned. In view of the above results, horizontal tubes were highly affected with static instability than vertical tubes. Considering also that the downflow had a greater negative slope than the up-flow, the authors observed that the heat transfer of the near-wall fluid was influenced by buoyancy. This also influenced the changes in physical properties. Additionally, flow stability was decreased by an increase in the tube length while a decrease in the tube diameter did not decrease only the flow stability but also delayed the onset of flow instability. Nonetheless, the total heat and absorption heat ratio of the horizontal tube remained lower than that for vertical tubes irrespective of the changes in tube length and diameter.

As proof of the concept, a new correlation was developed to accurately predict the onset of flow instability of supercritical fluids in different flow directions considering the buoyancy effects. This correlation was strongly dependent on the heat absorption capacity, buoyancy, and geometry structure. Overall, the authors clarified the differences and relationship of the buoyancy effect on horizontal and vertical flows thus revealing the relationship between hydrodynamic characteristics and heat transfer. Based on the findings, vertical flow is safer for regenerative cooling of systems under supercritical pressures. As stated by Professor Zhuqiang Yang in a statement to Advances in Engineering, the study insights will advance the field of regenerative technology for various practical applications. 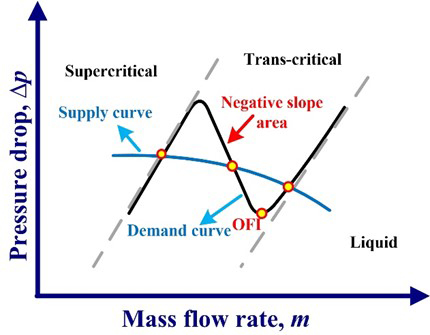 Yang Zhuqiang is an associate professor in the school of Energy and Power engineering at the Dalian University of Technolgy. I received the B.S.(2005) and Ph.D.(2015) degrees from Xi’an Jiaotong University. I mainly engaged in heat transfer and hydrodynamic theory of supercritical fluid, efficient energy conversion and utilization and other aspects of the study, published about 30 high-level papers on research journals and conferences, supported by the National Natural Science Foundation of China, National Science and Technology Major Project and China Postdoctoral Science Foundation.