Methylammonium lead iodide perovskite has potential applications in solar cells, lasers, light-emitting diodes, and photodetectors. Methylammonium lead iodide perovskite is considered a direct bandgap semiconductor, however, the long minority carrier lifetime with similar values as those of the indirect bandgap semiconductors, as well as the associated long charge carrier diffusion length is a mystery in this field.

Various theoretical studies have indicated that methylammonium lead iodide perovskite has an indirect bandgap 60meV below the direct band gap which should be visible in emission and absorption spectra. The indirect gap could be responsible for the long carrier lifetime owing to the fact that thermalized carriers are protected against recombination through the fast direct transition. This indirect transition is reference to Rashba splitting of the conduction band.

Researchers led by Dr. Bruno Ehrler from the AMOLF Institute in Amsterdam, The Netherlands studied the optoelectronic changes of thin films of polycrystalline methylammonium lead iodide perovskite exposed to mild hydrostatic pressure of up to 400MPa which was below and above the phase transition at 325MPa. They demonstrated that the bandgap changed with pressure and the direct transition was enhanced. Above the phase transition, methylammonium lead iodide perovskite behaved like a direct bandgap semiconductor. Their work is published in Energy & Environmental Science.

In their studies the hybrid methylammonium lead iodide had an indirect bandgap which the authors explained because of the distortion of the lead iodide framework and this led to an electric field across the lead atom therefore splitting the conduction band. They observed that the position of the indirect transition 60meV below the direct transition was in keeping with an absorption spectrum that resembled an indirect-direct bandgap semiconductor. Charges thermalized in the conduction band were protected from recombination considering that recombination required a change in crystal momentum. For this reason, the indirect bandgap explained the contradiction between the long charge carrier lifetime and strong absorption. The electric field across the lead atom was observed to reduce when under pressure. This led to increased strength of the direct transition, which led reduced the carrier charge lifetime and improved the radiative efficiency. Tianyi Wang, lead author of the study, says “We first could not explain the apparent contradiction between an increased radiative efficiency, and a shorter lifetime under pressure, but with the direct-indirect bandgap it makes perfect sense.”

The outcome of the study opens a new path for development of new perovskite semiconductors with engineered band structure. The new material will be suitable for solar cells with high photovoltage, low lasing lasers, and efficient light emitting diodes.

Tianyi Wang received his bachelor degree in materials science and engineering at Nanjing University of Aeronautics and Astronautics (NUAA) in 2012 with a thesis on chemical bath deposition of tin sulfide thin films for photovoltaic applications under the supervision of Prof. Honglie Shen. He then studied at Ludwig-Maximilian University of Munich (LMU), Technical University of Munich (TUM) and University of Montpellier II (UM2) under the Erasmus Mundus master programme MAMASELF (Master in materials science exploiting large-scale facilities) and graduated in 2014 with a thesis entitled “Low temperature synthesis of TiO2 thin films with superstructures via wet imprinting” under the supervision of Prof. Peter Müller-Buschbaum. In December 2014, he joined Hybrid Solar Cell group at AMOLF as a PhD student. His research interests are in synthesizing and understanding photophysics of novel photovoltaic materials. 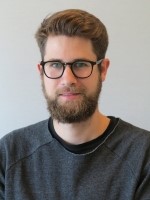 Benjamin Daiber received his B.Sc. in physics in 2014 from University of Heidelberg. In 2016 he earned his M.Sc. in the physics track Advanced Matter and Energy Physics at University of Amsterdam. He is a PhD candidate in the Hybrid Solar Cell group at the AMOLF Institute in Amsterdam. His research interests include new photovoltaic materials, singlet fission in polyacenes, energy transfer mechanisms, and the nature of charge carriers and excitons in lead halide perovskites. He is using optical, electrical, and time dependent measurements to understand the complex photophysics of these systems.

Bruno Ehrler received his PhD in 2012 from the group of Neil Greenham at the University of Cambridge on Nanocrystalline Solar Cells. After a short postdoc he became a Junior Research Fellow at Selwyn College, Cambridge, and worked in the group of Professor Sir Richard Friend on singlet fission solar cells. In 2014 he started an independent research group at the Institute AMOLF in Amsterdam, NL.

His research focus on solar cells that could, in principle, overcome the Shockley-Queisser limit for single-junction solar cells. His research includes perovskite semiconductors for tandem solar cell applications, and singlet fission down-conversion. The group works on fundamental properties of the hybrid and organic semiconductors, and also applies these in solar cell devices.

Go To Energy and Environmental Sciences