Metallic components used in manufacturing microelectronic devices are highly susceptible to fatigue failure due to cyclic loading. With the decrease in the size of the metal components to micro-and nanoscale dimensions, surface effects generally play a significant role in the fatigue process. At present, cyclic bending tests have been widely used for manipulating miniaturized specimens. Nearly all of the reported microscale bending tests have shown that the plastic deformation is greatly affected by the inhomogeneous loading condition induced by the dislocation pile-up at the neutral plane. Recent research has revealed that uniaxial cyclic loading fatigue mechanism at the microscale can be employed to eliminate the effects of strain gradient. As such, different experiments, including cyclic tension-tension and cyclic tension-compression fatigue, have been carried out to obtain more insights on the fatigue failure of the metallic components within the low cycle regime. Nevertheless, despite the remarkable efforts and contributions, load-dependency of microscale fatigue with a wide displacement range have not been fully explored.

In a recent paper published in the International Journal of Fatigue, researchers: Dr. Kai Huang from Harbin Institute of Technology, Professor Takashi Sumigawa, and Professor Takayuki Kitamura from Kyoto University investigated the load-dependency damage process of microscale single-crystal copper with single slip system. In their approach, the authors conducted a series of fully-reversed tension-compression fatigue experiments under different load amplitudes. These experiments made use of micro-single-crystal copper specimens with single slip systems and were carried out within the low-cycle regime. Moreover, a scanning electron microscopy (SEM) technique was used for in situ observation of the fatigue damage process.

The authors reported a new fatigue mechanism for crack initiation in microscale single-crystal copper. Under higher stress conditions, fatigue damage process was generally classified into three stages describing the formation of the intrusions/extrusions attributed to the crystallographic back and forth slipping under fully-reserved loading and fine cracking. Consequently, early damages with monotonic growth of extrusion/intrusions were observed in all the specimens even though the formation of intrusion/extrusions was majorly affected by the load amplitude, especially at the initial stages. Furthermore, a lower load threshold of about 10 – 19 MPa for crack initiation was reported. Above this threshold, no significant load-dependency of fatigue crack initiation was observed. It was worth noting that unlike the plateau regime of bulk coppers, the resolved shear stress amplitude of the microscale single-crystal copper is directly proportional to the plastic resolved shear strain amplitude.

In summary, the study investigated the load-dependency of fatigue evolution in microscale single crystal copper, based on a series of fully-reversed tension-compression fatigue experiments. Results showed that the formation of extrusions/intrusion is mostly affected by the load amplitudes. Moreover, a load threshold for crack initiation of about 10 – 19 MPa was reported. In a statement to Advances in Engineering, Dr. Kai Huang observed that the results provide new insights for understanding fatigue mechanisms for crack initiation in microscale single-crystal copper. He further postulated that the insights would advance the design and fabrication of high-performance microelectronic devices for various applications. 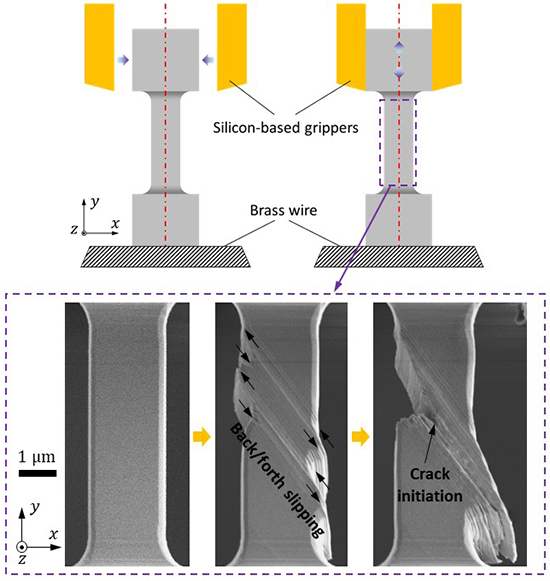 Dr. Kai Huang is currently a lecturer at Harbin Institute of Technology in China. He received his B.S. degree (2012), M.S. degree (2014) and Ph.D. degree (2018) in mechanics from Harbin Institute of Technology. From 2018 to 2020, he worked as a postdoctoral researcher (Program-Specific Researcher) at Kyoto University in Japan. His research interests are mainly focused on fracture mechanics of inhomogeneous materials, fracture nano-mechanics, fatigue and strength of micro-/nano-sized metals.

Go To International Journal of Fatigue