Processes at the solid-liquid interface are important in many applications across a variety of fields from solar energy to corrosive protection. These critical processes include physisorption and chemisorption, electrochemical reactions, various interactions involving (dis)charging of colloids, and photocharging. These processes all involve the evolution of surface charge, making surface charge desirable to monitor. In addition to the monitoring of surface charge, concurrent monitoring of the pertinent observables is equally beneficial to understand the chemical nature of these processes with the possibility of enhanced spatial and time resolution. Much of the existing approaches in previous literature solve this problem through optical tweezers-based methods. Regardless, these techniques have a drawback in that the obtained valuable and sensitive measurements of the overall surface charge do not provide insight into the chemical nature of the surface and surface species interactions. To this note, there is need to develop an experimental platform that will enable sensitive measurement of time-resolved surface charge at solid-liquid interfaces at microscopic scales combined with spectroscopic capabilities.

Researchers led by professor Oksana Ostroverkhova at Oregon State University developed an experimental platform which utilized a highly-sensitive method to measure surface charge on microscopic particles suspended in various environments combined with spectroscopic capabilities on the same particles. They hoped their technique would enable time-resolved measurements of surface charge evolution and energy transfer processes while under photoexcitation. Their work is published in the research journal Optics Express.

Their research technique combined measuring surface charge of microspheres with optical tweezers while simultaneously monitoring the fluorescence of the same spheres under photoexcitation via spectroscopy. To demonstrate their technique, micron-sized silica spheres were coated with physisorbed fluorescent organic semiconductor molecules and their blends. These spheres were suspended in different environments including water and toluene. As a control, uncoated silica microspheres were studied as well.

The authors observed that uncoated silica spheres in water had a higher surface charge density compared to coated silica spheres in both water and toluene. The fluorescence spectra for trapped coated spheres was also observed under photoexcitation. For example, the fluorescence spectra of one coated sphere indicated the interplay between monomeric and aggregate behavior of the molecules of the coating. Other spheres coated with donor-acceptor blends demonstrated exciplex formation, a behavior similar to that in spin-cast thin films of the same blends. Significantly, while the researchers monitored fluorescence from adsorbed molecules, they noted that other light-induced processes could also be studied with this technique including photoinduced charge and energy transfer between the molecules in the coating and in the environment, charge dependent Raman shifts, and (dis)charging under photoexcitation. The potential for time-resolved charge measurements was also evaluated.

Oksana Ostroverkhova and her team demonstrated a novel empirical platform by combining spectroscopic capabilities with time-resolved measurements of effective surface charge at solid-liquid interfaces. Altogether, this versatile platform has enhanced possibilities to study a variety of photo-induced processes simultaneously with measurements of surface charge and can also be incorporated in devices such as micro-reactors and microfluidics.

Figure: Silica microsphere coated with organic semiconductor layer, suspended in liquid, is placed in the AC electric field and optically trapped using a 800 nm laser (left). Upon excitation with 532 nm, the organic semiconductor emits fluorescence (right) which is detected and analyzed. The method enables simultaneous measurement of surface charge, with an elementary charge resolution, and fluorescence from the coated microsphere. 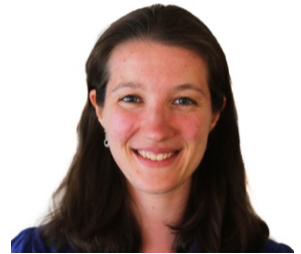 Dr. Rebecca Grollman received her BA in physics and anthropology from Ithaca College in 2010. She received her MS and PhD in physics from Oregon State University in 2016 and 2017 respectively. She studied the photophysics of small-molecule organic semiconductor materials via single molecule spectroscopy and novel optical tweezers techniques in the Organic Photonics and Electronics group led by Prof. Oksana Ostroverkhova. During this time, she developed a novel wide-field super-resolution microscopy technique using FRET for nanoscale studies of donor-acceptor organic semiconductors. She is currently a data scientist at Bsquare building machine learning models to predict device reliability.

Graham Founds grew up in a small country town in middle-west coast Oregon and started his education at Umpqua Community College studying a diverse spectrum of sciences and earning multiple academic awards. In late 2014 he transferred to the Oregon State University’s (OSU) physics program to complete his degree. He graduated from OSU with a Bachelor’s degree of Science and cum-laude honors in the spring of 2017. During his junior and senior year at OSU, Graham spent his time working under Prof. Oksana Ostroverkhova in her Organic Photonics and Electronics research lab as the undergraduate researcher in charge of developing an optical tweezers-based technique for studying the (dis)charging behaviors of organic semiconductor-coated microspheres.

His research proposal for this work was funded by the Undergraduate Research, Innovation, Scholarship & Creativity (URISC) award. Currently, Graham is planning to pursue his PhD studies in Physics in the UK.

Rick Wallace grew up in Wilsonville, Oregon where he discovered his passion for all things physics. He started out at Portland Community College and later transferred to Oregon State from which he earned a Bachelor’s degree of Science in Physics. His senior thesis work was on time-resolved charge measurements using optical tweezers-based method in the group of Prof. Oksana Ostroverkhova. While pursuing his degree, Rick also developed an interest in sharing his passion to physics with his peers and decided to become a physics teacher. In his free time, he likes to read, run, listen to music, and play with his nieces and nephews. After receiving his bachelor’s degree of science, he returned to run the family business while he plans to pursue his master’s degree in teaching

Oksana Ostroverkhova received her Diploma with Honors in Physics and Optical Engineering from Kiev Taras Shevchenko National University (Kiev, Ukraine) in 1996. During her graduate studies at Case Western Reserve University (Cleveland, USA) in the group of Prof. K. D. Singer, she specialized in the photoconductive and nonlinear optical properties of polymers and liquid crystals and obtained her PhD in Physics in 2001. Her postdoctoral work at Stanford University (Stanford, USA) in the group of Prof. W.E. Moerner involved physics and applications of photorefractive organic materials; there she also began her quest into single molecule fluorescence spectroscopy of organic optoelectronic materials. The Killam Memorial Fellowship award enabled Dr. Ostroverkhova’s work on ultrafast THz spectroscopy of organic semiconductors in the group of Prof. F.A. Hegmann at the University of Alberta (Edmonton, Canada).

In 2005, Dr. Ostroverkhova joined Physics Department at Oregon State University (Corvallis, USA), where she is currently an Associate Professor. She is a recipient of several awards including the NSF CAREER award, APS Woman of the Month, OSU Milton Harris Award for Basic Research, and OSU Loyd Carter Award for Outstanding and Inspirational Teaching. Her current research interests are in the optoelectronic properties of organic materials spanning various time and spatial scales, in the development of sustainable (opto)electronic materials, and in utilizing optical properties of materials in entomology.

For more info on the Organic Photonics and Electronics group at OSU, see link