Special attention is being paid to the use of catalysts in new production processes of natural gas from low-grade carbon resources such as the advanced integrated gasification combined cycle (IGCC) process. Previously, potassium carbonate and nickel catalysts have been used in this process. Although nickel is an expensive catalyst, it performs better in the production of methane. This paper focuses on the development of an inexpensive advanced integrated gasification combined cycle for low-grade coals with high generation efficiency and at temperatures below 900°C. One way to achieve this, proposed in the paper, is in use of natural soda ash which is inexpensive and available in large natural reserves.

In their study, Australian brown and Indonesian sub-bituminous coal samples were air dried, crushed, and sieved. Natural soda ash was used as a catalyst without any pretreatment.

Aqueous mixtures of soda ash and coal particles in deionized water were maintained at a temperature between 20-40 °C with the sodium ion concentration and pH of the mixture being monitored. The sodium ion exchanged coal was filtered, washed and dried for gasification experiments that followed. Heat decomposition of the molecules was done at a temperature of 700 °C in the presence of helium. The amount of free carboxyl was determined on the assumption that carbon dioxide emanates from the carboxyl groups. A microanalysis of the char samples was also conducted.

The authors found the amount and rate of sodium ion exchange was higher for the Australian brown coal as compared with the Indonesian sub-bituminous coal, and the reaction is controlled by the diffusion within coal pores.

The decreasing rate of sodium ion concentration was larger at a smaller particle size with significant effect on the Indonesian bituminous coal. The quantity of surface carboxyl groups that could be accessed by sodium ions is the same for the coals.

The research team also observed that the sodium catalyst may be significantly deactivated in the Indonesian sub-bituminous coal because the inactive species form easily and the char possess smaller quantities of sodium than the Australian brown coal. The use of the catalyst also reduced the gasification temperature by 120 °C, and carbon monoxide was produced in large quantities as compared with carbon dioxide and methane.

The microanalysis shows the sodium concentration increases with a color change from blue to green revealing a uniform distribution of sodium species. The sodium was enriched at the surface layer which tended to increase with char conversion accounting for the high activity per gram especially on the Indonesian bituminous coal.

From the research, it was evident that sodium cations of natural soda ash, composed of greater than 99% sodium carbonate, can be successfully ion-exchanged with the protons of carboxyl groups in low-grade coals without any pH-adjusting reagents. 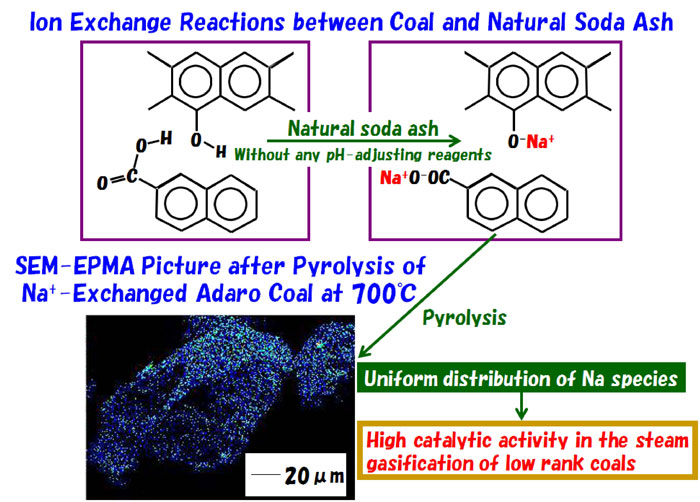 Naoto Tsubouchi is an associate professor in the Center for Advanced Research of Energy and Materials, Faculty of Engineering, Hokkaido University, Japan. He was born in Hokkaido, in 1973. He received my Ph.D. degree in engineering from Tohoku University in 2001. He has been working in the current position since 2011.

Approximately 80 % of total primary energy supply depends on oil, coal and natural gas, and this dependency will be almost unchanged in the not-too-distant future according to a recent IEA (International Energy Agency) world energy outlook. It is thus probable that ultimately-efficient utilization of fossil fuels is the best way in order to reduce CO2 emissions in a carbon-constrained economy. I have therefore been focusing every effort on fundamental research about advanced and novel technologies for heavy oil residues, low rank coals and low-valued natural gas.