The structure and properties of graphene on gold nanoparticles

Graphene supported on gold nanoparticles (Au NPs) is highly rippled and is selectively doped electrostatically by gold. Surface enhanced Raman scattering (SERS) of graphene is observed due to the enhanced electric fields between Au NPs, especially close to the localized surface plasmon resonance (LSPR). The presence of graphene increases significantly the lateral light scattering of the graphene/Au NPs. The reflectance can be tuned by annealing at moderate temperatures. We suggest that besides doping effects, the nanoscale corrugation of graphene also affects the reflectance properties. This can open a route towards tailoring the optical properties of Graphene/plasmonic nanoparticle hybrid structures through their morphology.

Graphene (GR) covered metal nanoparticles constitute a novel type of hybrid material, which provides a unique platform to study plasmonic effects, surface-enhanced Raman scattering (SERS), and metal–GR interactions at the nanoscale. Such a hybrid material is fabricated by transferring GR grown by chemical vapor deposition onto closely spaced gold nanoparticles produced on a silica wafer. The morphology and physical properties of nanoparticle-supported GR are investigated by atomic force microscopy, optical reflectance spectroscopy, scanning tunneling microscopy and spectroscopy (STM/STS), and confocal Raman spectroscopy. This study shows that the GR Raman peaks are enhanced by a factor which depends on the excitation wavelength, in accordance with the surface plasmon resonance of the gold nanoparticles, and also on the GR–nanoparticle distance which is tuned by annealing at moderate temperatures. The observed SERS activity is correlated with the nanoscale corrugation of GR. STM and STS measurements show that the local density of electronic states in GRis modulated by the underlying gold nanoparticles. 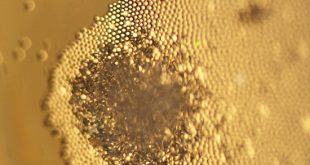