Solid-state electrolytes are a key component in solid-state batteries, although traditionally they have suffered from poor performance due to low ionic conductivities or poor mechanical properties. However, in a paper published in Advanced Materials, the team from University of New South Wales led by Professor Cyrille Boyer reports their 3D printed SPE offers high conductivity, as well as robust strength. This means the solid-state electrolytes can potentially be used as the actual structure of a device, creating a range of conceivable design opportunities, particularly for future medical products. This polymer electrolyte has the potential to be a load-bearing energy storage material. Because of its strength, it could be used as the actual structure of small electronics, or in aerospace applications, or in small personal medical devices given our 3D printing process can be very intricate and precise.

With existing solid-state electrolytes when you increase the mechanical strength of the material, you sacrifice a lot of the conductivity. If you want higher conductivity the material is much less robust. What we have achieved is a simultaneous combination of both, which can be 3D printed into sophisticated geometries. Although the solid polymer electrolyte developed by the UNSW team is regarded as a high-performance material, the researchers believe it can be manufactured using inexpensive and commercially available 3D printers, rather than sophisticated engineering equipment.

The SPE described in the paper is composed of nanoscale ion-conducting channels embedded in a rigid crosslinked polymer matrix. It is produced via a process known as polymerization-induced microphase separation (PIMS). According to the authors one of the other benefits of this SPE in energy storage devices is the fact it increases the cycling stability, that is the number of charging and discharging cycles until its capacity is reduced to a certain amount.

The authors show that this material is very stable and has the ability to charge and discharge over thousands of cycles. After 3,000 cycles there was only roughly a 10% drop. The researchers demonstrated 3D printing also reduces wastage compared to other traditional forms of manufacturing and reduces costs since the same machine can be used to produce a variety of differently shaped materials. In future, they product designers could utilize their SPE to create items with a much higher energy storage density. The new successful 3D printing process of such material could be particularly useful in future medical devices where small, intricately designed energy storage offers a number of benefits.

The lab research is focused on the development of environmentally friendly techniques for the synthesis of functional polymeric materials.

Furthermore, we are exploring photopolymerization in dispersed media for the synthesis of polymeric nanoparticles through polymerization-induced self assembly (photo-PISA).

Another focus is adapting the aforementioned techniques to the fabrication of advanced polymeric materials for new synthetic antimicrobial macromolecules. 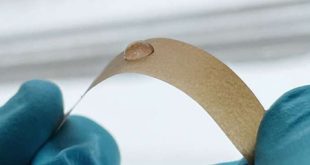