In the networked world of today, it is of ever increasing importance to understand how components act together to function on a large scale. To analyze such systems, we translate them into networks, where components become nodes that are connected by links. Over the past two decades or so, much effort has been devoted to the development of tools for understanding real-world networks. In particular, partitioning of a network into groups of nodes, called communities, using structural information only has received much attention. Community structure posits that nodes within the same community are densely connected, whereas nodes in different communities are sparsely connected. A community may hint at, for instance, group structure in social networks.

We developed a community partitioning method for networks specialized to so-called directed acyclic graphs (DAGs). In a DAG, nodes are organized into layers, such that links only point from nodes in higher layers to nodes in lower layers. DAGs are found in various domains. Citation networks, in which nodes are (scientific) articles and a link is drawn from a citing to a cited article, are naturally represented as directed acyclic graphs if layers are defined by the publication date. Then, links only point backwards in time, because it is usually not possible to cite articles that are yet to be published. Another example is a dominance hierarchy network of animals, where individual animals are represented as nodes and a link is drawn from an attacking to an attacked individual. A dominance hierarchy network is sometimes a DAG. The layer structure of a DAG implicates that some links are forbidden in the network. To design an algorithm to identify communities in directed acyclic graphs, we modified an existing algorithm to respect the structural constraint imposed by the layer structure. 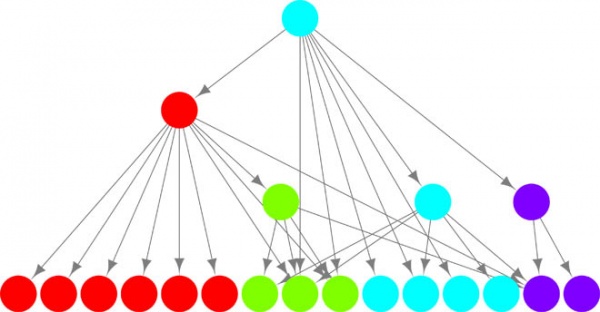 Go To The European Physical Journal B

Taro Takaguchi is Project Researcher of Global Research Center for Big Data Mathematics at National Institute of Informatics, Tokyo, Japan. He is also affiliated with JST, ERATO, Kawarabayashi Large Graph Project. In 2013, he received Ph.D. in Mathematical Informatics from The University of Tokyo. His main interest covers mathematical modeling and data analysis of time-varying network structure.