Doxorubicin is a cancer medicine and needs a drug delivery system to be transported to the cancer cells inside the human body. One possible drug delivery system is based on the adsorption of Dox to carbon nanotubes. There is a lot of excitement about the potential advantage of using carbon nanotubes to optimize the delivery of cancer drugs. Nanoparticle structures such as carbon nanotubes and nanographene oxide have extremely high surface area to volume ratio with a simple and well described chemical modifiability. The smoothest and the simplest method of holding doxorubicin on the outer walls of a carbon nanotube drug carrier is by physical adsorption. However, it is not clear, why reported doxorubicin loading efficiencies differ by a factor of at least 2 and the claimed acid triggered release is effective only upon introduction of a pH gated molecular switch on the carbon nanotube surface. To this end, there is need to check if a reducing environment can trigger the release of doxorubicin physically adsorbed on pristine carbon nanotube.

The two researchers initiated their experimental setup by utilizing scanning tunneling microscopy to observe countable doxorubicin molecules possessing a rich structural diversity for [email protected] They then undertook microscopic image analysis in a bid to deduce the loading efficiencies. Next, it was investigated whether electron transfer could stimulate the release of physically absorbed doxorubicin from [email protected] and if protons played any role alone and under reducing conditions. Eventually, they rationalized their new reductive mechanism for Dox release from [email protected] by molecular modeling using semi-empirical methods.

The authors observed that from the scanning tunneling microscopy analysis, doxorubicin was seen to behave as mono- or dimeric π-stacking molecules in single or double-stranded helical conformation on the outer surface of the carbon nanotubes. Moreover, the molecular resolution of [email protected] achieved with scanning tunneling microscopy allowed, for the first time, the measurements of loading efficiencies of doxorubicin on carbon nanotubes from image analysis to be taken. Furthermore, the broad range of reported loading efficiencies spanning a factor of two were rationalized by the observed presence of mono- or dimeric doxorubicin π-stacked on carbon nanotubes.

Sadaf and Walder study has revealed the rich architectural variability of [email protected] CNT. In addition, they have pioneered methods in measuring and rationalizing the reported loading efficiencies ranging 80–200% from image analysis. To this note, the scanning tunneling microscopy technique depicted here gives access to the doxorubicin arrangement and to the loading efficiency of [email protected] Therefore, this technique can be exploited and generalized to enable its use as an experimental method for finding new drug candidates that can be transported by the carbon nanotube carriers. A parallel study in the same publication reveals that Doxorubicin is efficiently released from its physically adsorbed state on CNT if a reducing agent such as glutathione is present. This finding can explain the high efficiency of [email protected] mainly towards cancerous cells. As the concentration level of glutathione in cancerous cells is much higher than in normal cells, Dox release occurs mainly in cancer cells and much less in normal cells. This important insight can be of relevance for other drugs, that can be carried with CNTs and released with glutathione. 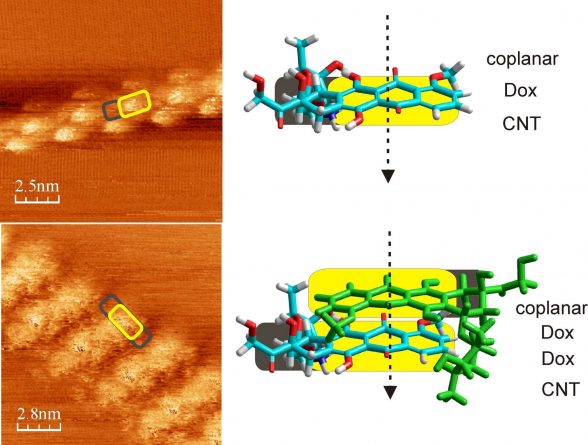 STM image of [email protected] in monomeric (upper row) and dimeric (lower row) helices. The aromatic dihydroxy anthraquinone ring system of Dox, denoted in yellow, has higher conductivity  than the aliphatic part of Dox and appear higher in the images. Shamaila Sadaf in the group of Prof. Lorenz Walder used a Nanosurf STM at ambient conditions to visualize the architecture of [email protected] and found that Dox forms helices of monomers (upper image) or stacked dimers (lower image).