Nano-structured cellulose, such as cellulose nanofibrils (CNFs), present one of the most advanced nanosized biomass materials credit to their outstanding mechanical and thermal properties. As such, CNFs have great potential for use in the fabrication of filaments, films, drug delivery systems – among other uses. Generally, fibrils can be obtained by disintegrating paper pulp through a combination of mechanical shearing and high-pressure homogenization, resulting in controlled fibrillation down to a width of around 4–20 nm and length of around 1 μm. It is well understood that the microscopic alignment of the fibrils within the cellulose filament has a strong effect on the mechanical properties of the material. This has inspired various publications focusing on the alignment of CNFs for cellulose material fabrication. In fact, a recent publication presented a flow-focusing method of aligning CNF and assembling them into strong filaments. Further, another study by Professor Hidemasa Takana from Tohoku University in Japan recently reported on an innovative method of controlling CNF alignment by coupling an alternating electric field with conventional fluid dynamical alignment control. This study showed that the increased alignment of fibrils in the setup used resulted in filaments having higher strength and elasticity.

Overall, comprehending the complex behavior of CNFs flowing in the alternating electric field is critical to realizing the full potential of such methods; particularly the approach reported/cited in the latter study. To this end, Professor Hidemasa Takana and Mengfei Guo from the Tohoku University in Japan conducted an in depth numerical simulation of CNF alignment by an alternating electric field in the presence of elongational flow. Their aim was to unravel and comprehend the CNF alignment process in the flow channel. Their work is currently published in the research journal, Nanotechnology.

In their approach, fibrils were assumed to be ellipsoidal, to have a rod-like structure, and to execute only translational and rotational motions in two dimensional plane. Essentially, the alignment process of the cellulose nano-fibrils in an alternating electric field and elongational flow was numerically simulated for the fabrication of strong cellulose filaments. Further, the two researchers evaluated the order parameter of CNFs in the flow channel by solving the Smoluchowski equation for the orientation distribution function of the CNFs.

In summary, the study clarified on the fibril orientation distribution function of CNFs flowing through an alternating electric field via a numerical simulation. The approach employed utilized flow channel consisting of a straight channel with electrodes placed downstream, followed by a nozzle. Remarkably, the results showed that CNF alignment in the electric field was enhanced with applied voltage because the electrostatic torque remained dominant over the Brownian rotation. In a statement to Advances in Engineering, Professor Hidemasa Takana highlighted that their work proved the existence of an optimal fibril length for electrostatic alignment coupled with elongational flow effect. 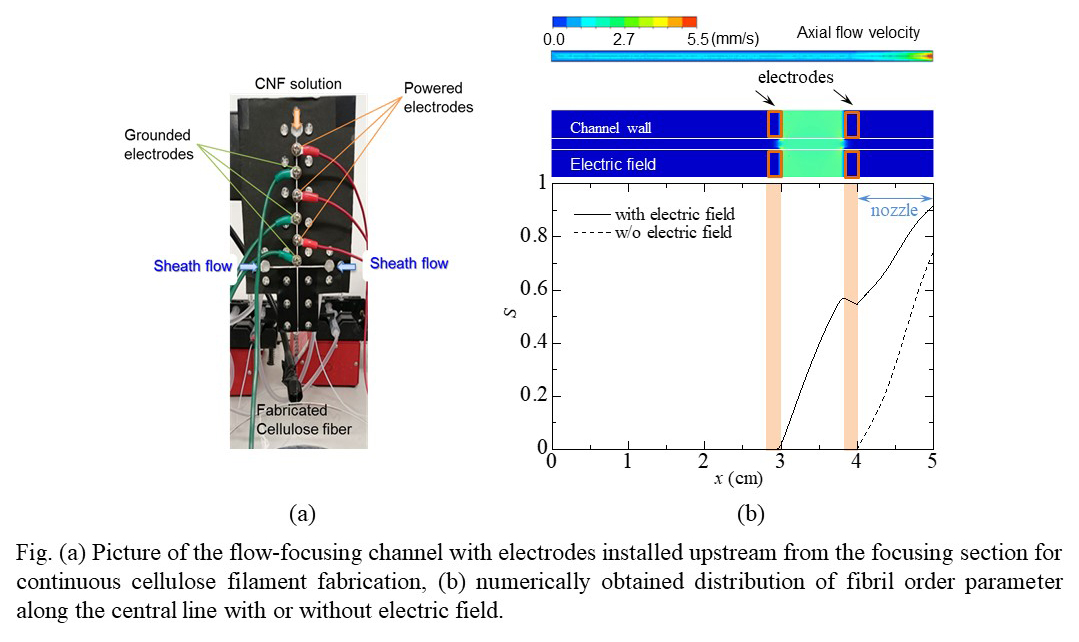 Hidemasa Takana received his PhD in engineering from Tokyo Institute of Technology, Japan in 2004. He is currently an Associate Professor of the Institute of Fluid Science at Tohoku University, Japan.