This work developed a hybrid, compact, table top EUV lithography technique which is capable to print arbitrary periodic pattern with sub-wavelength resolution in a single exposure step. This innovative nano-printing technology integrated both interference and Talbot EUV lithography together so that higher resolution nanopatterns with flexible design rules can be obtained with larger depth of focus compared with traditional imaging technique.

On the other hand, Talbot lithography offers a flexible design rule which is capable of printing arbitrary periodic pattern. However, there is a conflict between depth of focus and resolution which make this technology possible but expensive and difficult to use for high resolution nanopatterning.

This paper examined the physics modelling and the experimental demonstration to prove a hybrid lithography solution which combines Talbot and interference technique together so that unique benefits from both sides can be obtained. At a common Talbot plane, two Talbot images generated by coherent EUV laser illumination are superimposed. In this way, the interference pattern is modified by a defined Talbot image. This method enables filling the arbitrary shaped cells produced by the Talbot effect with fine interference features, relaxing the fabrication constrains of the mask and extending the DOF of the exposure. With a simple experimental setup, Talbot interference lithography (TIL) can claim the advantages of both lithography methods, interference lithography and Talbot lithography, creating a pattern that neither of them can accomplish separately. 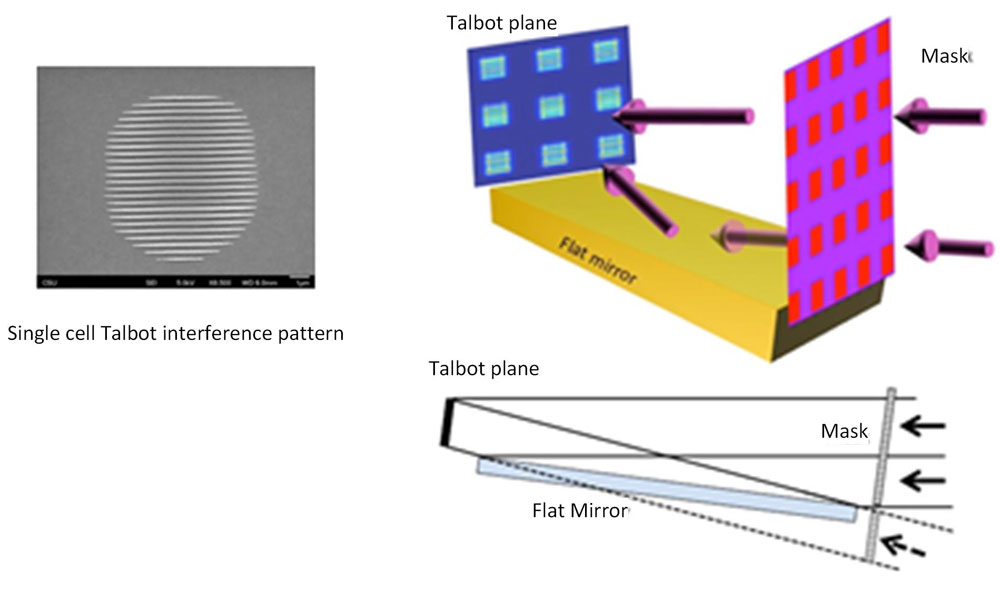 Dr. Li received his PhD degree from Colorado State University and is now working at Intel Corp. in a lithography development group. His research is focused on table-top coherent EUV lithography.

He worked for Dr. Marconi and his EUV lithography group from 2010 summer to 2015 winter. This group belongs to NSF engineering research center for EUV science and technology. Dr. Li is a R&D researcher capable of making breakthroughs of novel nanofabrication approaches from physical concepts to manufacturing process by overcoming fundamental physic limits. His research offered brand new alternative approach for small business or research institute to fabricate arbitrary periodic nanopatterns with high resolution in a table top footprint. Unless traditional lithography technique, this lensless idea has much more flexibility and is capable of printing ultra-fine features without a demanding request for expensive scanner.

Dr. Li’s research interests range from tool development for nanofabrication to novel optics simulation. Multiple papers based on his research have been published on peer-reviewed journals like Optics Express and Nature communication.

Periodic nanopatterns can be generated using lithography based on the Talbot effect or optical interference. However, these techniques have restrictions that limit their performance. High resolution Talbot lithography is limited by the very small depth of focus and the demanding requirements in the fabrication of the master mask. Interference lithography, with large DOF and high resolution, is limited to simple periodic patterns. This paper describes a hybrid extreme ultraviolet lithography approach that combines Talbot lithography and interference lithography to render an interference pattern with a lattice determined by a Talbot image. As a result, the method enables filling the arbitrary shaped cells produced by the Talbot image with interference patterns. Detailed modeling, system design and experimental results using a tabletop EUV laser are presented.