Surface-enhanced Raman scattering (SERS) has become increasingly popular in the scientific community as an analytical technique capable of fast detection of analytes at low concentrations and molecular levels. SERS has demonstrated its high efficiency to increase the Raman signal of chemical and biological species through the amplification of electromagnetic fields generated by the excitation of localized surface plasmons.

Such detection is particularly important when working with harmful or highly polluting species, whether biological or chemical in nature, even at trace levels. Various nanomaterials are being used as suitable surface enhanced Raman scattering substrates. However, greater preference is for those with anisotropies, peaks, roughness, angles, and edges as they have shown remarkable response by increasing Raman signal.

Dendrites are hierarchical superstructures with a high number of branches with numerous edges, corners, and staggered atoms, which make them excellent surface-enhanced Raman scattering substrates. Galvanic replacement is an easy technique for the preparation of bimetallic dendrites, but long times or strong conditions for the dendrite’s formation have continued to plaque the technique. Therefore, electrodeposition has been fronted as a suitable technique for the preparation of bimetallic dendrites. It’s a one-step process and has the benefits of short preparation time and outstanding reproducibility.

Ag nanostructures are known to have an excellent plasmonic performance; the incorporation of Cu has shown an improvement on SERS effect and it diminishes the cost of the substrate. Thus, Ag-Cu nanodendrites prepared by electrodeposition offer benefits compared to other materials. It represents a fast, low-cost, and facile approach, with a great potential for highly reproducible SERS measurements aimed at the identification, analysis, and quantification of SERS-active analytes for ultra-sensitive detection of biomolecules and chemical substances. Potentials applications include the trace level detection of organic pollutants, aromatics, dyes, drugs, pathogens, biomarkers, DNA, etc. For example, in national security it can be applied to the detection of narcotics, explosives, radioactive cations, and forensic chemistry. In medical diagnosis, it can be applied in the early detection of cancer and other chronic degenerative diseases. In environmental contamination, polluted air, water, soil, and mixtures can be examined.

In their study, electrodeposition was performed in a galvanic cell layout and bimetallic dendrites obtained using a 5V constant potential at short times. Bimetallic dendrites were also obtained and tested at 4 V and 20 seconds, but the obtained electrodeposits were majorly self-assembled nanoparticles structured in a dendrite-like arrangement. For an atomic ratio of 1:1, dendrites were obtained, but for an atomic ratio of 1:3, mounds of interconnected nanoparticles were formed. Consequently, electrodeposition of Ag-Cu with a 5 V potential at 30 s was found to be the optimum condition for the formation of silver-copper nanodendrite structure with a 1:1 atomic ratio.

The authors used Surface-enhanced Raman Scattering measurements using Rhodamine 6 G (R6G) as the probe molecule with a 633nm laser wavelength. Raman spectra of bare aluminum sheet and Al/Ag-Cu nanodendrites substrates with R6G were also acquired. They found the most characteristic Raman peaks were obtained with Aluminum/silver-copper (Al/Ag-Cu) nanodendrites substrate. Its effectiveness was observed as a significant increase of the signals for very dilute R6G solutions. Significantly more intense signals were recorded in the surface-enhanced Raman scattering spectrum as compared to bare aluminum.

The SERS effect of the Ag-Cu nanodendrites obtained using R6G as probe molecule indicates that the substrate is highly active in SERS; the presence of nanoparticles decorating the arms and branches of the nanodendrites, coupled with the effect provided by the nanodendrite itself generated many hot-spots responsible for the low limit of detection (LOD) for R6G. With this substrate, R6G was detected up to 0.6560 attomoles equivalent to a 1.3114×10-15 mol L-1 with an analytical enhancement factor in the order of 1012. Therefore, aluminum/silver-copper (Al/Ag-Cu) substrate offers an excellent choice for analyte detection. A very low limit of detection for R6G using (Al/Ag-Cu) nanodendrites substrate was observed. Indeed, this was the lowest limit of detection ever achieved and reported using silver-copper dendritic materials.

In all, the study by CIMAV scientists compared with silver-copper nanodendrites obtained in other studies offers several advantages. The electrodeposition process had several benefits such as short deposition time of less than one minute, and the aluminum substrate is cheaper than substrates used in other studies (e.g. graphene). As for the SERS measurements and performance, no incubation time with the analyte is needed, no signal from the substate interferes with the analyte spectrum, and low LOD and high reproducibility are achieved. The study provides an efficient way for the preparation of excellent silver-copper SERS substrate that could be used for molecule detection even at trace levels. The electrodeposition process presented could be extended for the fabrication of other plasmonic bimetallic dendrites. 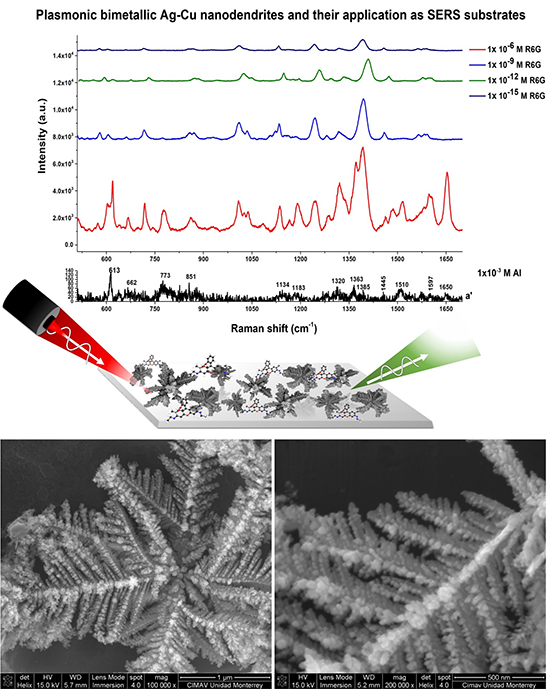 Professor Margarita Sánchez-Dominguez has a B.Sc. in Industrial Chemistry from Autonomous University of Nuevo Leon (UANL, Monterrey, Mexico). She received her Ph.D. in Physical Chemistry from University of Bristol (England), with a specialty in surfactant systems in 2004. She was a postdoctoral fellow at Institute Charles Sadron (Strasbourg, 2004-2006) and Institute of Advanced Chemistry of Catalonia (Barcelona, 2006-2010). She joined the Advanced Materials Research Center (CIMAV S.C., Monterrey, México) as a full time research professor in 2010. Her current research interests include the design and development of metal and metal oxide hierarchical superstructures synthesized by soft chemical methods (bicontinuous microemulsions, electrodeposition, electrophoresis, galvanic displacement) and their use as electrocatalysts and surface enhanced raman scattering (SERS) substrates. Other interests include the development of micro and nanoformulations for controlled and prolonged delivery of drugs and other actives.

Dr. Ruben Dario Rivera-Rangel received his Ph.D. in Chemistry from Universidad de Guanajuato-Mexico in 2018 working on the synthesis of metallic nanoparticles in greener systems of oil-in-water microemulsions and nano-emulsions. From 2019 to date he joined the research group of Prof. Margarita Sanchez at CIMAV S.C. (Monterrey) as a postdoctoral researcher where he is currently developing hierarchical plasmonic nanostructures by electrodeposition for their application in surface-enhanced Raman scattering (SERS). His current research interests are focused in the obtention of SERS substrates, colloidal chemistry, surfactants, and nanoformulations.

María Edith Navarro-Segura received her B.Sc. in Nanotecnology Engineering from Universidad de La Cienega del Estado de Michoacan de Ocampo in 2015. She joined Professor Margarita Sanchez’s group at CIMAV (Monterrey) in 2016, working on microemulsions for fragrance release. She obtained her M.Sc. in Materials Science from CIMAV S.C. in 2018 working with polyhedral Ag and Au nanoframes by electrochemical growth and their application as SERS substrates. Currently, she is enrolled in the Ph.D. program in Materials Science at CIMAV, focusing on the development of SERS substrates (Au-Cu nanostars, Ag-Au dendrites) for biomedical applications.

Professor Ana Arizmendi has a B.Sc. in Materials Engineering from Technological Institute of Saltillo, Mexico. She concluded her M.Sc. in Metallurgical Engineering Sciences and Ph.D. in Metallurgical and Ceramic Engineering at CINVESTAV-IPN, Mexico. After graduating, she joined an automotive company as product innovation researcher. Since 2008 she joined the Advanced Materials Research Center (CIMAV) in Monterrey as a full-time researcher and in 2017 she graduated from M.Sc. in Commercialization of Science and Technology (CIMAV-University of Texas joint program). Her main research focus at CIMAV is the design, development and characterization of metal matrix nanocomposites and nanostructured coatings with emphasis on industrial and novel applications. She has actively participated in the Innovation Binational Node Program of the Mexico North Region, which is affiliated to iCorps and the NSF-USA and the international Electrophoretic Deposition Network.