Fossil fuel is still the largest energy source globally with unstoppable high demand. Because of the continuous depletion of oil wells and reservoirs, more advanced production techniques such as hydraulic fracturing and horizontal drilling have been developed to access unconventional resources such as shale gas. However, due to the current complex nature of the low-permeability reservoirs, knowledge about the geological aspects, rock properties, and various design parameters as well as their relationships is of great significance in reservoir development and exploration. In particular, permeability directly influences hydrocarbon fluid flow and is controlled by both the rock permeability system and the natural fracture permeability system, which are both depended on the effective stress.

Up to date, considerable work has been reported on the effect of fracture permeability on the ultimate recovery and production of oil and gas. Despite being relatively lower than natural fracture permeability, the matrix compaction effect, otherwise referred to us matrix permeability reduction as a function of pressure, is still an important element in shale recovery. Unfortunately, no thorough investigations have been done on the effect of matrix component on hydraulic fracture design and hydrocarbon production. Besides, the effects of the gas spillage especially in the small pore in shale gas reservoirs are relatively large and thus cannot be ignored. Up to now, different correction models i.e. Klinkenberg’s and Fathi’s models have been proposed to account for the gas spillage effects in shale gas flow. However, the gas spillage effects on fracture design and production prediction especially for shale rocks have not been fully explored.

Briefly, the research team initiated their studies first by developing empirical permeability correlations from core-lab tests under varying pressures and confining stresses. Next, the obtained data was used to run reservoir simulations using two scenarios one taking into consideration the effects of gas spillage and matrix compaction on gas production while the other approach not taking the aforementioned effects into account. Eventually, the two simulation approaches were compared in terms of gas production, cost, efficiency, and critical conductivity to determine the most appropriate approach for understanding the effects of gas spillage and matrix compaction.

The gas spillage effects exhibited significant effects at pore pressures closer to BHP levels, occurring at the wellbore vicinity and late production period, even though it had low effects on the gas production predictions for most case scenarios observed in the field. On the other hand, the matrix compaction effects were observed at all the pore-pressure levels throughout the entire production period. For Marcellus Shale, ignoring the two permeability effects resulted in an overestimation of the gas production by 11% in six months, over-designing of proppant pumping amount thus leading to high costs of fracturing of a single horizontal well. Therefore, the effects of gas spillage and matrix compaction in rock permeability are crucial for hydrocarbon production evaluation and design of hydraulic fracturing in shale gas reservoirs. 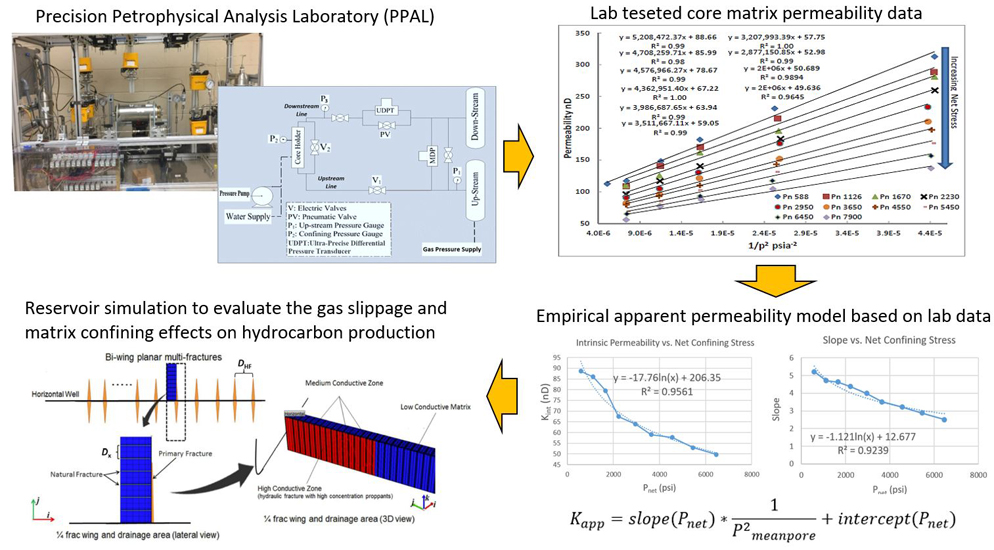 Ming Gu is an assistant professor in petroleum and natural-gas engineering at West Virginia University. Before joining West Virginia University, he worked as a senior research scientist in Halliburton’s Houston Technology Center from 2014 to 2016. Gu’s current research interests include geomechanics, petrophysics, hydraulic-fracturing study in unconventional oil and gas reservoirs.

He has authored or coauthored more than 20 technical journal papers. He obtained his PhD degree in Petroleum and Geosystems Engineering from the University of Texas at Austin in 2013, and both BS and MS degrees in Mechanics Engineering from Tsinghua University in 2007 and 2009. He is a SPE member.

Mehrdad Zamirian has BSc, MSc, and PhD in petroleum engineering. After receiving his PhD from WVU in 2015, he started his career as teaching assistant professor of West Virginia University in the Petroleum and Natural Gas Engineering Department.

He currently teaches several topics including property evaluation, petrophysics, and well logging. His research area is in evaluating the petrophysical properties and RTA/PTA in unconventional resources especially Marcellus shale.

His main research interests are on flow and transport through porous media and enhanced oil recovery. He has his PhD degree in Petroleum Engineering from Louisiana State University in 2013. Before that, he has MSc in Reservoir Geosciences and Engineering from Institute Francais du Petrole in 2007.

Courtney Rubin currently works for Baker Hughes as a coring specialist. Before that, she obtained her MS degree in Petroleum and Natural Gas Engineering of WVU in 2018 and BS degree in Geology of WVU in 2011. Her current work interests include delivering service and support to customers in conventional core acquisition, processing, and analysis, as well as providing field support to coring specialists.