Germanium photodetectors are crucial elements of analog and microwave photonics circuits. Implementation of these circuits requires the selection of appropriate parameters, notably, bandwidth and saturation power. Despite the availability of multiple high-speed and high-power photodetectors, silicon-based devices have been identified as promising candidates for realizing high-speed and high-power applications because of their high thermal conductivity, low cost, and compatibility with CMOS technology. In particular, waveguide coupled germanium photodetectors (Ge PD) have attracted significant research attention. Whereas most of the literature work has focused on individual parameter improvement, simultaneous optimization of the bandwidth and saturation power of germanium photodetectors is underexplored despite its practical implications. This can be attributed to the difference in the sizes of the absorption region required by the two crucial parameters.

Recent research has revealed that the saturation power of germanium photodetector is mostly restricted by thermal failure and space charge effects. The former can be prevented by using high thermal conductivity materials, while the latter can be prevented by three methods, namely, using PIN arrays, junction structure design, and light field manipulation. In their previous research, the authors successfully demonstrated a high-power Ge PD with a new junction structure based on two distributed absorption regions. Motivated by the promising results of the previous work, Dr. De Zhou, Dr. Guanyu Chen, Sidong Fu (Ph.D. Student), Yan Zuo (Ph.D. Student), and Prof. Yu Yu from Huazhong University of Science and Technology, in their new research, they proposed the design of a high-power and high-speed germanium photodetector with distributed regions. The main objective was to understand the underlying mechanism of the distributed absorption photodetector. The work is published in the journal, Optics Express.

In their approach, three different distributed-absorption photodetectors: 2-, 4-, and 8-cell schemes were fabricated and tested. The design consisted of a junction formed by a multimode absorption region and an input light split and fed into the junction cells. A conventional theoretical model was developed to determine the device’s bandwidth and power loss, considering the number of cells. The n-cell distributed-absorption photodetectors were implemented with the proposed expanded junction structure and lumped electrodes to achieve the desired high-speed and high-power applications.

From the experimental results, the 2-cell scheme recorded the highest performance with a high saturation current of 16.1 mA and a high 3dB bandwidth of 50 GHz. Additionally, it also exhibited the least current loss among the three n-cell series and a superior effective absorption volume compared to the conventional photodetector. More importantly, the authors observed that the distributed-absorption photodetector could be integrated with various other photonic devices without necessarily changing the standard silicon photonic foundry process.

In a nutshell, the study expanded the conventional PIN structure concept and proposed a junction structure design to improve the power handling capability of germanium photodetectors. Among all the photodetectors, the 2-cell exhibited the desirable optimal performance with remarkably high radio-frequency saturation photocurrent, bandwidth, and current density. Unlike conventional photodetectors, the current photodetector could be implemented as a single state of photodetector arrays with traveling-wave electrode configuration. Therefore, its remarkably improved properties make it attractive for numerous applications, including integrated microwave photonics system due to the zero change in the fabrication process in the standard silicon photonics foundry. Dr. De Zhou, in a statement to Advances in Engineering, said that the std results would provide a guideline for the future design of high-speed and high-power germanium photodetectors. 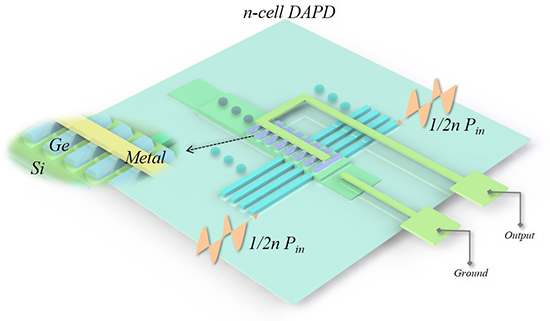 Yu Yu received the B.S. and Ph.D. degrees from the Huazhong University of Science and Technology (HUST), Wuhan, China. From 2009 to 2010, he was with the Centre for Photonic Systems, Department of Engineering, University of Cambridge, Cambridge, U.K., as a Research Associate. He is currently with the Wuhan National Laboratory for Optoelectronics, HUST, as a Professor. His research interests include silicon device and all-optical signal processing.

De Zhou received the B. S. degree from Hubei University of Technology, China in 2015, and the Ph. D. degree in Wuhan National Laboratory for Optoelectronics from Huazhong University of Science and Technology in 2020. His current research interests include high-power and high-speed photodetectors, Silicon-based photonic integrated circuits, microwave photonics and coherent photonic transceiver.