Generally, structural concrete components are susceptible to failures caused by external forces such as earthquakes. After the occurrence of the 2010/2011Canterbury earthquake series in New Zealand, questions have been raised concerning the design, construction, and erection of various structural concrete components. In particular, the seismic performance of these components has attracted significant attention of researchers. The rapid increase in the use of precast concrete members is attributed to its efficiency in terms of cost, and excellent stiffens and strength properties against the lateral forces.

In a recently published literature, researchers have shown that the structural behavior of precast concrete comprises that of the wall and associated connections. Thus, the seismic performance of the wall is dependent on the combined components’ behavior.

In New Zealand for example, metal duct grounded connectors are used mainly to connect the precast concrete walls to their foundations. During the assembly process, the metal ducts comprising the starter bars from the foundation are cast inside the wall panels and filled with grout at the construction site. Unfortunately, the seismic performance of the metal duct grounded connections is still relatively poor due to the brittle failure of the connections between the precast walls and other structural elements. Therefore, researchers have been looking for a better method of increasing the seismic robustness of these connections. Recently, a new detailing of the connection types comprising of the splice reinforcements has been proposed to improve on the connection strength.

To this effect, the University of Auckland research team: Pouya Seifi, Dr. Richard Henry and Professor Jason Ingham investigated the in-plane seismic behavior of both the newly recommended and existing precast concrete wall panel connections. The proposed detailing entailed reinforcement of the connections using rectangular stirrups around the ducts which also improved the strength of the splices between the connections and vertical reinforcement. In particular, seven precast walls were individually tested to validate the seismic performance of the connections using grouted metal ducts. Also, the details regarding the crack patterns, wall-panel failure modes, and load-displacement behavior were provided taking into consideration the critical parameters like wall panel geometry and axial load level. The work is published in the journal, Engineering Structures.

The authors observed that the walls with existing connections performed adequately under low axial loads but poorly when the axial load and the wall panel length were increased. The introduction of the confinement reinforcement around the grouted metal ducts prevented brittle failures by enhancing the strength of the reinforcement splice. Additionally, all the seven wall panels exhibited consistent behavior to the design of precast concrete panels with similar monolithic connections despite larger measured lateral strength than calculated nominal strength. Based on the results, a numerical finite element model including a wide range of parameters was calibrated for designing precast concrete wall panels with grouted metal duct connections. This will advance the seismic performance of the connections. 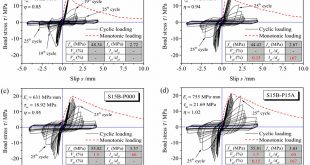