Presently, the best performing technology for powering electronic vehicles is the lithium-ion battery (LIB). However, the LIB is far from being an equal competitor with internal combustion engines owing to energy density, charge rate and high cost. For instance, despite the decrease in the cost of LIB over the past few years, it is still more than twice the target price set by the United States Advanced Battery Consortium. Nevertheless, the LIB technology is widely used, and this is only set to increase. Understanding the advantages as well as the disadvantages or limitations enables the best use to be made of the battery technology.

A promising and moderate risk pathway to meet the set target is to use a high-capacity silicon anode paired with a high-capacity/voltage cathode instead of the common graphite anode/lithium-nickel-manganese-cobalt-oxide (NMC) cathode system. Unfortunately, such silicon-based anodes suffer from some inherent drawbacks when used, mainly due to their large volume variation upon cycling. Therefore, to optimize their electrochemical performance, it is highly relevant to characterize in detail their morphological evolution upon cycling, and assess how it depends on their composition and manufacture. For such purposes, X-Ray computed tomography (XRCT) is certainly one of the most advanced approaches.

To this end, Canadian scientists at the Institut national de la recherche scientifique (INRS) scientists Dr. Victor Vanpeene and Dr. Lionel Roué together with Dr. Eric Maire at MATEIS – CNRS and Dr. Andrew King at Synchrotron Soleil in France combined synchrotron X-ray tomography/diffraction analyses performed along the 1st and 10th cycles of silicon-based anodes. Specifically, their goal was to carry out in situ characterization of the microstructural changes of the silicon-based anodes using the aforementioned approach. Their work is currently published in the research journal, Nano Energy.

Generally, their approach entailed performing combined synchrotron XRCT/XRD analyses along the 1st and 10th cycles of a silicon-based anode made with nanocrystalline/amorphous silicon particles and using a porous carbon paper as a current collector instead of a conventional copper foil and with graphene nanoplatelets as a conductive additive instead of usual carbon black.

The authors highlighted that their formulation had a major impact on the structural changes of the electrode occurring upon cycling by (i) preventing its macroscopic cracking and related electrical disconnections, (ii) limiting its volume expansion and improving its reversibility, indicative of limited permanent damage in the electrode architecture, (iii) preventing the formation of crystalline Li15Si4 phase  which is known to be detrimental for the electrode cyclability. However, the capacity fade with cycling remained significant, and was mainly attributed to accumulation of solid electrolyte interphase products with cycling, progressively obstructing the porous network of the electrode.

The study by Canadian and French scientists indeed reported detailed qualitative and quantitative information on the structural variation of silicon-based anodes induced by cycling could be obtained from in situ combined synchrotron XRCT/XRD analyses performed at different stages of the 1st and 10th cycles. The research team further demonstrated that the use of graphene nanoplatelets as conductive additive instead of usual carbon black particles prevented the macroscopic cracking at the electrode upon cycling. Altogether, more detailed analytical approach that yields excellent results has been reported. 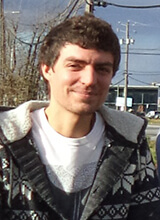 His research interests focus on developing Si-based anodes for Li-ion batteries and on their characterization by in-situ X-ray tomography.

Lionel Roué is a professor at the Institut National de la Recherche Scientifique – Centre Énergie, Matériaux, Télécommunications (INRS-EMT, Canada) since 1998. His research group is focused on the study of electrode materials (especially nanostructured/metastable materials elaborated by high-energy ball milling) for various applications, including Li batteries and Al production. He has also a strong interest in the development of in-situ characterization tools for battery materials such as tomography, dilatometry and acoustic emission.

Andrew King is beamline scientist at the PSICHE beamline of Synchrotron SOLEIL, where he is responsible for tomography and imaging for a wide range of user applications.

His own research is based on combining imaging and diffraction techniques for materials science. He was formerly based at the ESRF, Grenoble, where he was involved in the development and application of diffraction contrast tomography (DCT).

Eric Maire is CNRS research director at the MateIS laboratory INSA de Lyon Villeurbanne France since 1997. His research is focused on the study of microstructure and deformation modes of metals and highly porous materials.

He pioneered in situ tensile tests for materials science at the ESRF using X ray computed tomography. He then developed many other kinds of in situ experiments (compression, hydrostatic pressure, high and low temperature, and recently electrohemichal cycling) in laboratory tomographs, at the ESRF and at different other synchrotrons.

How to build gold nano-antenna