The advent of technology has enabled the development of metamaterials. Essentially, these are materials comprised of a synthetic composite with a structure such that they exhibit electromagnetic properties that are not found in natural materials, especially a negative refractive index. Consequently, they have been used in designing passive microwave devices such as filters, perfect lenses, antennas and phase shifters. In recent times, there has been an increasing interest in investigating the use of metamaterials for designing coherent sources of high power microwave radiation. Presently, Backward Wave Oscillators (BWOs) and Traveling Wave Tubes (TWTs) are the popular and most widely used vacuum electron devices for generating and amplifying microwaves, respectively. They operate based on Cherenkov radiation, which generates coherent output power from an electron beam passing through a slow wave structure with phase velocity less than the speed of light. The aforementioned slow wave structure system is quite expensive to fabricate. To address this, 2D planar metamaterials have been proposed for designing 2D slow wave structure vacuum electron devices. Nonetheless, a thorough review of existing literature reveals that further research is still necessary.

There is increasing interest in designing a BWO which does not have a large volume and at the same time can increase electron beam interaction with slow wave structure loads. In this view, University of New Mexico researchers from the Department of Electrical and Computer Engineering: Hamide Seidfaraji (Ph.D. student leading the work), Dr. Ahmed Elfrgani, Professor Christos Christodoulou and Professor Edl Schamiloglu developed a fast growth response, efficient BWO which could optimize electron beam coupling to a metamaterial slow wave structure through a multibeam interaction. The researchers proposed to study the interaction of a multibeam cathode with a set of metamaterials inside a cylindrical waveguide. Their work is currently published in the research journal, Physics of Plasmas.

Metamaterials possess interesting properties such as the negative refractive index, low group velocity, and below cutoff propagation, among others. In their approach, a specific structure was developed for the purpose of addressing the subject matter. The developed structure comprised of a number of metamaterial metallic plates that were periodic in the axial direction and were repeated in the azimuthal coordinate. A unit cell of their structure comprised four pairs of rectangular plates that were oriented 90 degrees apart in the azimuth.  One of the pair of plates provided negative permittivity while the other negative permeability.  As a consequence, the developed system was not based on a cutoff waveguide and can support higher power levels than a system based on a cutoff waveguide.

The authors reported that simulations of their designed four-beam BWO with an electron beam of 440 kV and a current of 250 A per beam (1 kA in total) generated 105 MW with a rise time of about 50 nanoseconds. Additionally, by using the eigenmode simulations, the researchers were able to obtain negative dispersion around the operating frequency where the group velocity was reported to be negative and extremely small.

Hamide S. Faraji was born in Bijar, Kurdistan, Iran. She received her B.S. in Electrical Engineering and M.S. in Applied Electromagnetics from the University of Amirkabir (Tehran Polytechnic), in 2005 and 2008, respectively. She joined the University of New Mexico in 2011 and received her Ph.D. degree in 2017. Her thesis was on metamaterial applications for high power microwave sources.

Her research interests include applied electromagnetics, high power microwave backward wave oscillator, terahertz klystron, metamaterials, and RF and antenna design. She worked as an Antenna Designer in SpaceX Aerospace Company from 2017 to 2019, and in September 2019 she joined the Cold Logic and Quantum Computer team at Microsoft Corporation as an RF Engineer.

Ahmed M. Elfrgani received the B.S. and M.S. degrees in electrical engineering from Garyounis University, Libya in 2008. In 2015, he received his Ph.D. degree in electrical engineering from the University of New Mexico, NM, USA. He joined the University of New Mexico in 2016 and is presently a Research Assistant Professor. He has authored and co-authored over 15 journal papers and conference proceedings.

Christos G. Christodoulou received his Ph.D. degree in Electrical Engineering from North Carolina State University in 1985.  He is an IEEE Fellow, a member of Commission B of the U.S. National Committee (USNC) for URSI, and a Distinguished Professor at UNM.  He has published over 500 papers in journals and conferences, written 17 book chapters, co-authored 8 books, and has several patents.  His research interests are in the areas of modeling of electromagnetic systems, machine learning in electromagnetics, high power microwave antennas, reconfigurable antennas for cognitive radio, and RF/photonics.

Edl Schamiloglu was born in The Bronx, New York.  He received the B.S. in 1979 and the M.S. in 1981 from Columbia University, New York, NY.  He received the Ph.D. from Cornell University, Ithaca, NY in 1988.  He joined the Department of Electrical and Computer Engineering at the University of New Mexico as Assistant Professor in 1988 and is currently Distinguished Professor and Associate Dean for Research and Innovation.  He is the author of  three books, 155 refereed journal papers, 260 reviewed conference papers, and 8 patents. He is an IEEE Fellow. His research interests include high energy density science, plasma physics and diagnostics, charged particle beam generation and propagation, and high power microwave sources and effects.

Go To Physics of Plasmas 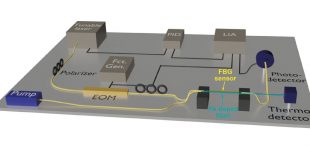 Significant progress toward the realization of radiation-balanced fiber lasers