Solving the mystery in vibrational spectrum of PtCO in argon matrix

Over the past two decades, studies involving noble gases have attracted significant interests amongst researchers. Recently, theoretical simulations for the experimentally observed noble gas compounds such as Ar-NiCO, have been conducted for anharmonic vibrational state. For example, the QCISD(T) method used for all electron calculation of Ar-PdCO and Ar-PtCO predicted a binding energy of 5.3 and 8.2 kcal mol-1 and with a bending frequency of 10% just like in the case of Ar-NiCO.

However, anharmonic vibrational state calculations for noble gas compounds such as Ar-PdCO and Ar-PtCO have not been explored in the previous studies. This is due to the available limited computational program, which has also hindered theoretical studies on their infrared intensities, fundamental frequencies and overtone band. Although there are several methods for computing infrared intensities and vibrational frequencies of Ar-PtCO, they however still experience difficulties such as in treating floppy molecules.

Dr. Yuriko Ono and Professor Tetsuya Taketsugu from Hokkaido University in collaboration with Dr. Kiyoshi Yagi from RIKEN and Professor Toshiyuki Takayanagi from Saitama University in Japan developed a novel technique for calculating infrared intensities and vibrational frequencies of Ar-PtCO. They purposed to investigate the anomalous effects of the noble gas on the vibrational and infrared spectra of the PtCO from the calculations. The work is currently published in the research journal, Physical Chemistry Chemical Physics.

The study successfully presented a novel VCI based method for computing the vibrational frequencies and infrared intensities of Ar-PtCO. This interesting work has shown that the anomalous effects of Ar binding on the intensities of the Pt-C-O bending modes were due to drastic changes in the dipole moments of Ar-PtCO along the Pt-C-O bending normal coordinates. The large intensity of the overtone level and the decrease in the intensity of the fundamental level were the main cause of the misalignment of the Pt-C-O fundamental level in the Ar- matrix. The computation resolved the consistency between the matrix-isolation and the gas-phase experiments for PtCO. 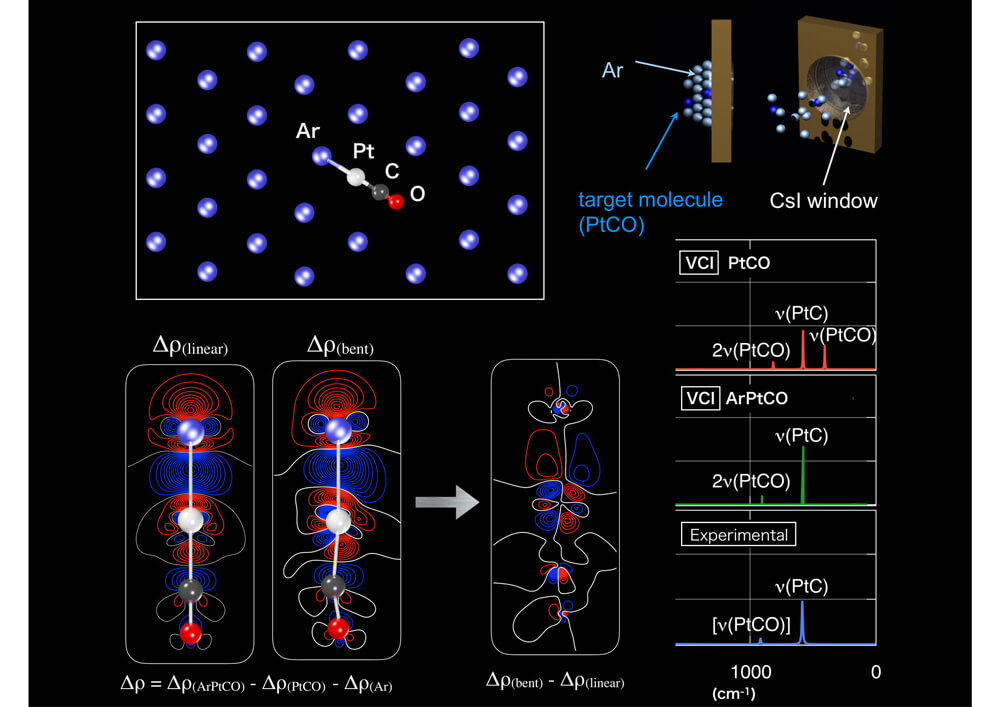 She has done a state-of-the-art work on the theoretical prediction of noble gas compounds by carrying out highly sophisticated electronic structure and vibrational state computations. She is now developing a parallel program code of the automated reaction path search method combined with quantum chamical computations.

His main interest is nuclear quantum effects in chemical reaction dynamics and he has published over 180 scientific papers.

Tetsuya Taketsugu received his Ph.D. degree in theoretical chemistry from the University of Tokyo in 1994 and became an assistant professor at the University of Tokyo in 1995. In 1999, he moved to Ochanomizu University as an associate professor and in 2005, he has become a professor of quantum chemistry group in Hokkaido University. He has established key methodology in quantum chemical calculations for real molecular system by interfacing electronic structure theory with dynamics and with vibrational theory.

He has done a pioneering work on the reaction-path bifurcation in multi-dimensional coordinate space, providing insights to reaction dynamics beyond the static reaction pathway. He developed ab initio molecular dynamics code in the electronic structure program GAMESS in 1995, and extended it to the excited-state dynamics with a surface hopping scheme in 2002.

A Fast and Simple Approach to Computational Peptidology