Human body provides mainly two types of energy: i) mechanical energy in form of movements (breathing, walking, etc.) and ii) thermal energy linked to body heat. If the available thermal energy from human body is estimated to be in the range from 2.4W to 4.8W, and Carnot efficiency puts an upper limit of 5.5% on how well this waste heat can be recovered, as well as considering that mankind population exceeds 7 billion and continues to grow, then the prospect to produce significant amounts of useful energy from human body heat seems to be very attractive, and suitable for eliminating the need for batteries, especially in systems based on “zero-power” self-sustainable standalone electronics, such as self-powering health sensors devices. Despite great technological advances, a key drawback of most implantable devices is their batteries, whose limited capacities restrict their long-term use. For instance, considering that a pacemaker needs just 50μW to last for seven years, the last thing to do when a pacemaker runs out of power is to open up a patient just for battery replacement. Likewise, non-implantable health aid/monitoring devices such as hearing aid sets, as well as temperature sensors could be powered up from human body thermal energy due to their low power consumption which is around 1mW for five days.

In this sense, a materials scientist, and colleagues are giving new meaning to thermal energy scavenging with a device that can generate electricity from body heat.

In brief, the material engineering entails a composite of 10nm average thick graphene nanoplatelets segregated into the grain boundaries of Bi2Te3 polycrystals. Next, the influence of the boundary-scattering in the intergranular transport of phonons and electrons via the thermoelectric power and thermal conductivity were examined. Eventually, the authors investigated the feasibility of using the combined effects in fabricating high-performance nanostructured thermoelectric devices.

By realizing a proof-of concept device, the authors recorded a higher thermoelectric figure of ZT~1.5 merit at room temperature in comparison to the reference one with ZT~0.9, which represents an increment of around 35% on the maximum output power of the device. Hence, energy barrier extension at grain boundaries trough grain coating may be an appropriate strategy to filter away low-energy carriers via energy filtering, and thereby to increase ZT.

Furthermore, the thermoelectric converter is able to efficiently harvest heat from temperature gradients as low as 10°C coming from the human body, and supply power to a conventional temperature sensor device used for health monitoring. Thereby, the present research shed a light for the development of self-powering health sensors devices from human body heat which would eliminate the need for batteries, as well as to ensure their long-term powering.

In summary, Professor Jaime Alvarez Quintana and the research team successfully fabricated an enhanced performance thermoelectric converter for self-powering health sensors based on nanostructured polycrystals which induce boundary-scattering in the intergranular transport of phonons and electrons. To interpret their study, the origin of the observed behavior on ZT was further analyzed using a 3D composite model for polycrystals along the reflection coefficient of electrons scattering at the grain boundaries, from which the concept unveiled the existence of a maximum on the relevance of the grain boundaries on electrons, meaning that depending of the electrons energy the grain boundary will or will not promote their transference. In general, the CIMAV study will advance the efforts to reclaim waste heat and use to it produce electricity, an approach that will significantly enhance energy production and utilization. 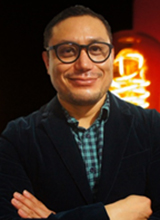 Jaime Alvarez is professor of Physics in the department of Physics of Materials at the Centro de Investigacion en Materiales Avanzados S.C. Unidad Monterrey, Mexico (CIMAV S.C.). He received the Ph.D. degree in Physics of Materials from Universitat Autonoma de Barcelona in 2009, and was a visiting professor in the Centre for IC Failure Analysis & Reliability (CICFAR) at the National University of Singapore in 2016. From 2009 to date, he has served as researcher at CIMAV S.C. where he is currently doing research on a variety of topics related to thermal transport in low dimensional systems with applications to thermoelectrics and solid state thermal devices.

In 2013, his research group was pioneering on proponing phase-change materials with first and second order phase transitions for thermal rectification. Currently, he holds National Research System level II, and he has been awarded with grants from the Mexican Council for Science and Technology (CONACYT) under the programs for Fundamental Research (CB-130124, CB-241597) and National Issues (PN-1358) to lead projects in the field of thermal energy harvesting and management.