Laser strikes on commercial aircraft have risen over the years and laser pointers are increasing in power and decreasing in price. Lasers can distract and even harm pilots during critical phases of flight and can cause temporary visual impairment. In 2015 there were over 10,000 laser incidents reported to the FAA, the UK Civil Aviation Authority, and Transport Canada. Besides, similar attacks also happen to military personnel, security force, law enforcement and personnel in the transportation industry. Anti-laser filter or laser-glare protection devices are of consideration importance in combating these attacks and protect affected personnel.

Traditional laser protection filters, such as Rugate filters, are currently used to protect against lasers. They are made based on thin-film technology, composing of multilayers of high/low refractive index dielectric films. These products can provide high degree of protection against laser attacks but limited to narrow angles of incident laser beams . For lasers incident at angles larger than 30-40 degrees, they generally perform poorly or even stop to work due to peak wavelength shift effect of the filter under angular beams. Increasing bandwidth of Rugate filter can circumvent this issue, but it will cause undesired problems of reduced visibility, high coloration and low integrated visual photopic transmission.

At present, a wide-angle high-transmission anti-laser filter for blocking lasers but remain clear visibility is still missing in the market. Companies like BAE Systems, Boeing, Airbus and government defence agencies have a shared interest in developing next-generation, wide-angle (up to 60-85 degree) shift-free anti-laser filter and device to address the safety concern and increasing market need. As traditional design strategy based on thin-films is limited in its ability to deliver the desired product, new innovations must be sought. Artificially engineered Metamaterials offer a new route to design the desired product. Metamaterial is a material engineered to have properties that are not found in naturally occurring materials. They derive their properties not from the properties of the base materials, but from their designed structures in subwavelength scale.

Led by Dr. Zengbo Wang, a joint research team from UK Bangor University (James Monks, Liyang Yue and Bing Yan) and Qioptiq Ltd (Andrew Hurst, Barrie Aldred) proposed and demonstrated a new metamaterial anti-laser filter design that meets the requirement of high visibility, wide-angle and shift-free laser blocking of a class 3B 532 nm green laser [1]. It can provide laser glare protection against visible laser or laser pointer attacks coming from random directions while remain clear visibility. The filter can be placed onto devices ranging from personnel goggles to aircrafts and automobile windows, its potential impact on both defence and security are enormous where safety is a major concern.

The metamaterial design consists of an anti-reflection layer, active blocking and substrate layers. The central active blocking layer was designed to be a metamaterial composite media made of silver nanoparticles organized in a three-dimensional (3D) primitive hexagonal Bravais lattice configuration and embedded in a high-index dielectric of Zinc Sulphide. The proposed design is likely to be manufactured in a mass production manner sinces it doesn’t involve complex unit structure. Initial working prototype of the design has recently been produced. Altogether, this work may lead to the realization of next generation laser protection devices that are currently sought by major aerospace companies and government defense agencies. 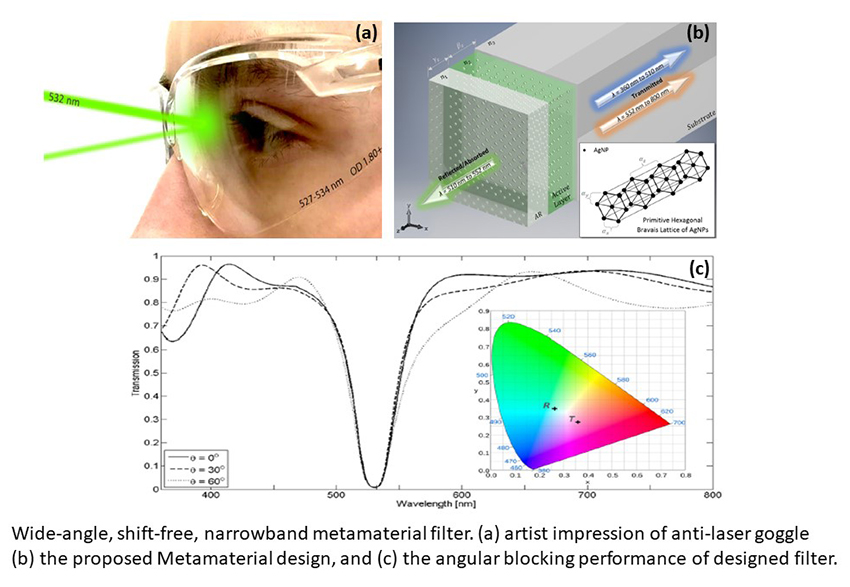