Biomimetics is the imitation of models, systems and elements of nature for the purpose of solving complex real-world problems. Through millions of years of evolution, nature has solved majority of engineering problems, including: self-healing abilities, tolerance and resistance to environmental degradation, solar energy harnessing and hydrophobicity – among others. Just to cite a few, the intricacy of honeycomb, sophistication of animal tissues and the rigidity and strength of plant systems. Narrowing down to structural performance, nature has established structural hierarchies of excellent mechanical performance, with regard to strength and toughness. Consequently, nature’s biological structural hierarchies can be inspirational learning resource for the development of new technologies. In fact, high-performance materials and structures have been developed for solving various complex problems in the world. For instances, researchers across the world have been utilizing the microstructure of fruit walls (e.g. pomelo), nut shells (e.g. macadamia shell), insect wings (e.g. beetle elytra and butterflies), etc.

Recently, researchers from Swinburne University of Technology, Australia: Dr. Hing-Ho Tsang and Saim Raza explored the use of structural hierarchy as found in natural materials and came up with the novel idea of using the micro- to nano-structure of human muscle tissues for designing the internal structure of energy absorbent and impact resistant tubular sections. They introduced hierarchy at multiple length scales into tubular sections that could enable them to be utilized as energy absorbing systems in various industries. Their work is currently published in the research journal, Composite Structures.

In brief, the proposed hierarchical tubular section was inspired by the micro- to nano-architecture of tendon and muscle, which could be mimicked by packing smaller tubes into a tube of a higher hierarchical level. Their research work commenced by mimicking the internal hierarchical architecture of muscle and tendon in the proposed tubular sections with multiple length scales. Next, hierarchy was introduced by packing seven equal-size smaller-diameter tubes inside a larger-diameter tube. The structural configuration of the third order hierarchical tubular section is shown in the figure. The video shows the propagation of stresses in the first, second and third order tubular systems when subjected to impact.

The authors believe that the superior mechanics of the investigated natural systems were primarily caused by the geometric arrangement as shown in their study rather than the chemistry or other properties. This meant that the knowledge regarding the geometric arrangements had great potential and applications in many different engineering material developments. Moreover, significant improvement in the energy absorption capability was revealed when hierarchy was introduced. Wholesomely, greater enhancement was achieved for higher-order hierarchical sections.

In summary, the Tsang-Raza study successfully presented the mimicking of biologically optimized material in terms of structure and functionality, for the development of novel composite materials and structures. In general, the process demonstrated here can be repeated for creating tubular sections of higher hierarchical order, regardless of size or choice of materials. Altogether, there is potentially a wide range of real-world applications of the novel concept presented here, including: in industries of airframe, vehicle frame, packaging, coatings, barrier, protective wear, and so forth. More so, the results established by Swinburne University of Technology scientists can help open up avenues of further research in the area of hierarchical energy absorbing tubular systems. 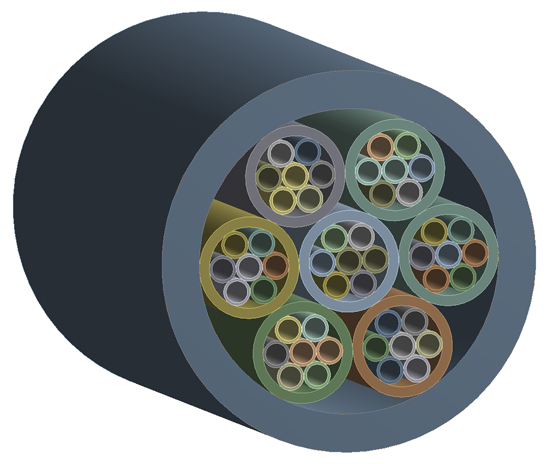