A promising candidate for photothermal therapy

Among the available methods for treating tumors and cancerous cells, thermal therapy has been identified as a promising treatment method, especially for early-stage tumors. Besides its non-invasive nature and minimal side effects, it is highly recommendable for patients not suitable for other treatment methods such as surgery due to other underlying physical conditions. During thermal therapy, it is essential to keep the temperature distribution under control to kill only the cancerous cells and protect the surrounding healthy tissues. However, due to the complexity of the living systems, real-time and precise temperature control within the affected cells remains a great challenge.

Generally, effective temperature control strategies require incorporating temperature monitoring devices for guiding thermal dosage employment and providing real-time temperature prediction. Several techniques for monitoring the temperature distribution in target regions have been proposed. Nevertheless, despite the significant progress, the light and heat transfer in biological cells and tissues is underexplored despite its importance in predicting the temperature distribution. Additionally, most of the techniques mentioned above are classified as active control methods, in which the thermal dosage can be adjusted based on the temperature feedback or simulation results. However, active control methods are less accurate and suffer from time-delay effects since their performance depends on the accuracy of the measurement devices.

Passive temperature control methods, though sparsely researched, are promising alternatives for applications in thermal therapy. They minimize or eliminate the use of external devices to control temperature distribution. Equipped with this knowledge, a group of researchers from the Harbin Institute of Technology: Professor Yatao Ren, Dr. Qin Chen, Dr. Huaxin Li and Professor Hong Qi together with Professor Yuying Yan from the University of Nottingham, developed a new passive control method to enhance the uniformity temperature distribution inside cancerous tissues during laser-induced thermal therapy (LITT). Their objective was to provide a detailed understanding of the temperature distributions and specific absorption rates during photothermal therapy, taking into account the phase change of the nanoparticles. The work is currently published in the research journal, International Journal of Thermal Sciences.

In their approach, optical phase change nanoparticles (O-PCNPs), specifically VO2 nanosphere, replaced the widely used noble metal nanoparticles to improve light absorption in the tumor during the early stages of the therapy. The nanoparticles were coated with SiO2 shells to reduce their toxicity and improve their biocompatibility and functionalization. The effects of the thickness of the SiO2 shells on the nanomaterial’s performance were also investigated. Based on the discrete dipole approximation principle and the proposed light and heat transfer model, the temperature distribution, absorption rate, and optical properties of the nanospheres were examined.

Results showed the O-PCNPs changed from the amorphous to the crystalline state upon attaining the phase transition temperature. This further resulted in a linear relationship between the temperature increasing rate and heat generation rate in the high-temperature zone. Phase change nanospheres with a radius greater than 90nm exhibited larger absorption cross-sections for amorphous state GST and VO2 nanospheres than their crystalline state counterparts. In contrast, a low-temperature zone with enhanced temperature increasing demonstrated improved uniform temperature distribution in the tumorous region. Additionally, the performance could be enhanced by appropriately tuning the shape and size of the O-PCNPs. 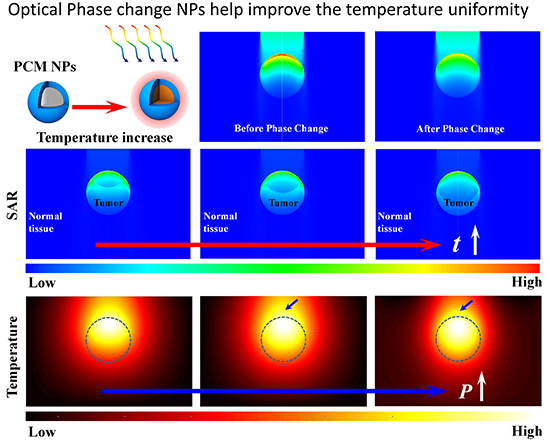 Dr. Yatao Ren is currently a Marie Sklodowska-Curie Individual Fellow at the Faculty of Engineering, University of Nottingham. Also, he serves as an associate professor in School of Energy Science and Engineering, Harbin Institute of Technology since 2019. He received the B.S. degree in Thermal Energy and Power Engineering from Harbin Institute of Technology (HIT), Harbin, China in 2012, M.S. degree in Engineering Thermophysics from HIT in 2014, and Ph.D. degree in Engineering Thermophysics from HIT in 2017. His research mainly focuses on light-particle interaction and its potential applications in biomedicine and solar energy harvesting.