Putting Roads under the Microscope

Skid resistance is the force developed when a tire that is prevented from rotating slides along the pavement surface. It plays an important part in the safety of drivers on the road. The ability of aggregates to maintain high levels of skid resistance during their in-service lifetime is highly recommended. Consequently, many attempts have been made to fully characterize the properties of materials used for road construction with a high focus on the skidding resistance. Skidding resistance of aggregates is generally measured using the Polished Stone Value (PSV) test. This technique prerequisites one to comprehend the factors that control skid resistance from raw materials, through laboratory measurements an onto in-situ sites. Another test for assessing skid resistance is the Friction After Polishing (FAP) test. Despite the variances in these methodologies, a broad comparison between the results from both techniques has revealed very little difference. As of now, factors that influence PSV have traditionally been associated with mineralogical and mechanical properties of specific rock-types. However, research has shown that the two as previously used do not provide the actual skid properties of rocks and therefore other rock properties; such as petrography, should be considered.

To this note, University College Cork researchers: Dr. Richard Unitt and Dr. Patrick Meere from the School of Biological, Earth and Environmental Sciences and the Irish Centre for Research in Applied Geosciences (iCRAG) assessed a group of variable lithologies from a single source with respect to the rock’s mineralogy, petrography and microstructure properties. They focussed on investigating the petrographic data of the aggregates originating from a particular quarry before and after laboratory polishing. In addition, they tracked the mineralogical and microstructural changes that take place between source and in-service application. Their work is currently published in the research journal, Wear.

In brief, they obtained rock samples from the identified quarry that has been operational since the early 70’s. Next, they investigated the petrographic data of the aggregate and compared them with the mechanical properties of PSV and Los Angeles abrasion (LA) tests, as well as introducing 3D areal surface measurements to quantitatively measure micro-texture. In addition, their technique enabled them to compare data from laboratory test of the obtained rock samples with in-service samples removed from a specified target area where the same aggregate had previously been incorporated into a road surface.

The authors observed that the values of PSV and LA they recorded for the rock samples they utilized corresponded to those obtained by the quarry operators over the past 20 years. From the data analysis, it was noted that unlike many other quarries the roughness/micro-texture was not fully dependant on grain size. Additionally, the samples obtained from the road surface showed a distinct drop in roughness when compared with those obtained from the quarry and the laboratory.

In summary, Unitt-Meere study showed that the PSV for any given aggregate cannot be dependent solely on grain-size as a controlling factor. In fact, their work established that multiple properties, including microstructural fabrics, influenced the potential PSV of an aggregate. Altogether, the combined methodologies as presented in this study have potential to offer an in-depth picture of how specific rock-types or regional geological settings can influence the polished stone value of aggregates and how different and varied factors can control the maintenance of a textured surface throughout its use.

The authors are continuing to develop the methodologies employed in this work in association with Transport Infrastructure Ireland (TII) but have now introduced 3D Raman microscopy to provide accurate mineralogical and petrographic data when tracking the aggregate through laboratory and in-situ wear. 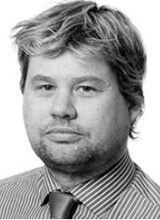 Richard is a Senior Post-Doctoral Researcher and an iCRAG Investigator at University College Cork specializing in petrography. He graduated with a BSc in Geology from the University of Exeter in 1990 and a PhD from the National University of Ireland in 1997. Richard has previously worked as a geological consultant, primarily dealing with engineering problems but has also worked in geophysics, geoarchaeology and the quarry and mining industries.

Pat is the Head of Geology in the School of Biological, Earth and Environmental Sciences, University College Cork and an iCRAG Funded Investigator. He graduated with a BSc in Geology from University College Galway in 1988 and went on to study for a PhD in structural geology at University College Cork, graduating in 1992. In 1992 he was awarded a Marie Curie Fellowship to carry out postdoctoral studies at the University of Leeds. He returned to Ireland in 1995 and took up a lecturing position in the Department of Geology, UCC in 1999. Pat’s primary research interest revolve around orogenic deformation from a micro to a macroscopic scale.

They are also working on the characterization and recycling potential of fine-grained materials generated by quarrying and mining operations.