Response and characteristics of TiO2/perovskite heterojunctions for CO gas sensors

Chemical sensors based on nanostructured metal oxide semiconductors are widely used in detecting and monitoring toxic and explosive gases. Due to the rapid increase in popularity and demand for gas sensors, there is a high need to improve their performance efficiency. In a recently published literature, titanium oxide has been identified as a good material for enhancing the sensor performance owing to its high sensitivity, thermal stability, nontoxicity, and self-cleaning properties. In particular, titanium oxide can be presented in the form of nanotubes which are specifically suitable for use in sensors.

In a recent paper published in Journal of Alloys and Compounds, researchers from the National Kaohsiung University of Science and Technology: Dr. Kuo-Chin Hsu, Professor Te-Hua Fang and Miss Pei-Che Wu in collaboration with Professor Yu-Jen Hsiao at Southern Taiwan University of Science and Technology fabricated and explored the structural surfaces and properties of carbon-dioxide thin-film sensors with heterojunction structure. Their objective was to significantly improve the design and utilization of titanium dioxide nanotubes in different practical applications.

Briefly, the research team started their experimental studies by preparing titanium dioxide nanotubes using the electrochemical method. On the other hand, the LSCNO perovskite film was prepared using the sol-gel process. The two were combined to form a PN heterojunction structure. This structure was eventually tested in a carbon monoxide sensor. Furthermore, the structural surface properties of the nanotubes were tested at different annealing conditions.

For different annealing atmospheres on the nanotubes, no significant change in the length or size of the pipe was observed. However, significant variance in the contact angles was noted. Nitrogen produced the maximum and hydrophobic surface contact angle while argon produced the minimum and hydrophilic contact area. The sensing characteristics of the heterojunction films operating at different temperatures were investigated. The film exhibited good recovery, reproducibility and stability thus making it suitable for use as a gas sensor. A small change in the resistance value and response for different carbon monoxide concentration was noted.

When the PN heterojunction film was tested, a moderate response (38.41%) was recorded at an operation temperature of 200°C and carbon monoxide concentration of 400 ppm. Therefore, the authors concluded that the PN junction makes a good carbon dioxide sensor at 200°C. Even though a single film exhibited the ability to sense carbon dioxide gas, it was outperformed by the developed heterojunction film which was more sensitive.

Kuo-Chin Hsu is an assistant research fellow of the National Kaohsiung University of Science and Technology, Taiwan. He received his Ph.D. degree in Materials Science and Engineering at Nation Cheng Kung University in 2016. His current research interests include nanomaterials, solar cells, and gas sensors.

Te-Hua Fang is a pioneer in molecular dynamics and nanotechnology. His current research interests include nanomaterials, sensors, and molecular dynamics, with over 350 journal publications. He is a Fellow of IET and the Taiwanese Institution of Knowledge Innovation. He is the Chair Professor of National Kaohsiung University of Science and Technology.

Go To Journal of Alloys and Compounds 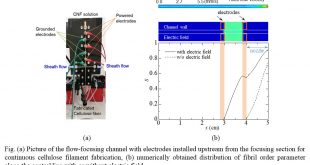