The earth crust remains dynamic with plates suddenly slipping past each other, consequently releasing energy and shaking the ground as a result. This occurrence often spells disaster whenever it occurs as lives, livelihoods and property are often lost/destroyed. Current urban developments call for densification of the available land by championing for vertical developments. Engineers globally have taken up the task confidently and numerous multi-story structures have been developed. Steel has often been the preferred material for such developments. To date, mitigation of seismic damage in new and existing building structures remains an important yet challenging topic in the field of earthquake engineering. Bare steel frame has only one defense against earthquakes, and it can collapse due to the failure of certain beam-to-column joints. Technically, there are 3 measures that can be executed to save such steel structures. Of the three, addition of lateral resistance components to enhance the seismic capacity of buildings presents not only a feasible idea easy to implement, but also an economically acceptable approach to addressing seismic deficiencies in high-rise steel structures.

For instance, the steel panel wall (SPW) has been proposed for strengthening mid-rise and high-rise steel frame buildings. In evaluating the SPW for reducing the damage cost of steel frame buildings, the life-cycle cost analysis (LCCA) approach was used to assess the final cost of the structure over the lifetime considering both increased initial cost and reduced damage/repair cost. Regardless, the doors are still wide open for development of other approaches and for such evaluation purposes. In this view, researchers from the Central South University, China: Dr. Liqiang Jiang, Professor Lizhong Jiang and Dr. Yi Hu, in collaboration with Professor Jihong Ye at the China University of Mining and Technology and Dr. Hong Zheng at the Chang’an University in China developed a new seismic life-cycle cost (SLCC) assessment method for steel frames equipped with steel panel wall (SPWF) structures. Their work is currently published in the research journal, Engineering Structures.

In their approach, cost-based seismic fragility analysis was proposed instead of the performance-based seismic fragility analysis, and the uncertainty propagation from failure probability to damage cost was considered. The technique considered the initial cost of the bolt-connected SPWs and the long-term economic consequences and benefits from the SPWs. Finally, a simplified method was proposed to directly describe the relationship between the SLCC and structural parameters.

In summary, the study presented a seismic life-cycle cost assessment method based on cost-based seismic fragility analysis and seismic risk assessment procedures. The proposed technique involved calculation of the structural responses, damage states and induced costs, aleatory and epistemic uncertainties, and seismic risk. Remarkably, the presented technique was implemented in 12-storey SPWF buildings with the aim being to quantify the effectiveness of the proposed SPW in reducing the seismic life-cycle cost of steel frame buildings. In a statement to Advances in Engineering, the authors highlighted that the presented idea offered a new method for future engineering practice and structural optimization. 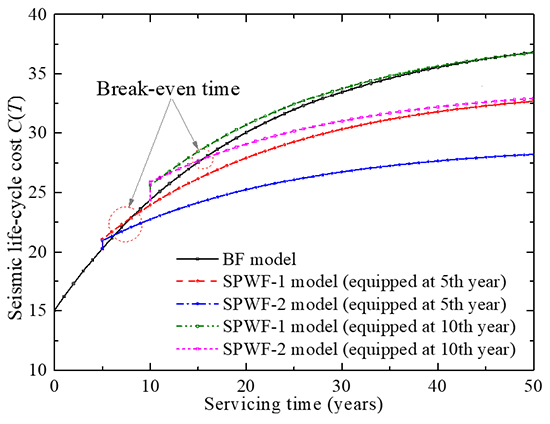 Yi Hu is a lecturer of civil engineering in Central South University of Central South University of Forestry and Technology and she received her Ph.D. from Chang’ an University. Dr. Hu’ research interests include seismic performance and risk assessment of concrete-filled steel tube structures and steel framed shear wall structures. Dr. Hu has published more than 10 scientific papers in Engineering Structures, Thin-Walled Structures, JCSR, etc. And she is also invited as reviewer for many international journals.

Lizhong Jiang is a professor in Central South University, China. He received his Ph.D. from Shanghai Jiaotong University. He is a professor selected into the “Cheung Kong Scholars Programme” and “Leading Talents of National High-level Talent Special Support Program”. Currently he serves as the dean of the Graduate School of Central South University, and the executive deputy director of the Chinese National Engineering Laboratory for Construction Technology of High Speed Railway.

Jihong Ye is a professor and the dean of the School of Mechanics and Civil Engineering of China University of Mining and Technology, and she is also a distinguished professor of Jiangsu Province in China. She received her Ph.D. from Tongji University. Prof. Ye has received National Science Fund for Distinguished Young Scholars and Key Program of National Natural Science Foundation of China.