Biocompatible scaffolds are commonly used in tissue engineering to realize multiple synergistic functions for regeneration owing to their ability to provide structural tissue support and facilitate cell adhesion and mass transport. It is well-known that neural tissues can react to stimuli. Taking advantage of this, biochemical and biophysical stimulation has attracted attention as an additional strategy for promoting functional regeneration and improving neurite growth. Neural stimulation techniques, specifically electrical stimulation, have been widely investigated to promote neural regeneration by modulating neuronal activities.

While it is possible to apply an electrical current or field through ionically conductive tissue fluid, electrically conductive neural scaffolds are required for more controllable and efficient delivery. Such scaffolds have effectively facilitated nerve regeneration, including carbon-based materials and conductive polymers. Nevertheless, delivering electrical stimulation to conductive scaffolds in clinical applications remains a big challenge. While most current solutions are limited to transcutaneous stimulation after surgery, others require transcutaneous wires that increase infection risks. Although self-powered and wireless electronic systems have emerged as promising solutions, they may cause undesirable impacts due to the spread of the electric current beyond the injury site.

The authors showed that the biocompatible silk scaffold with photoacoustic capabilities promoted neuronal regeneration by enabling nongenetic activation with spatial precision. Upon excitation, the CNT/silk film generated a broadband photoacoustic wave, whose amplitude could be controlled by varying the laser energy and CNT concentration. For successful neural stimulation, the generated photoacoustic wave required pressure of about 0.185 MPa. The CNT/silk films supported neural growth and had no impact on the viability or morphology of the film.

The biocompatibility, reliability and repeatability of the neural stimulation function of the scaffold were confirmed through time-resolved calcium imaging, activating over 94% of the photoacoustic-stimulated neurons in the light illuminated area. Compared with the unstimulated control group, the scaffold was observed to promote neurite outgrowth by 1.74-fold, which was also associated with an increase in the brain-derived neurotrophic factor concentration.

Compared with the existing neural stimulation methods, this is a light-mediated method with a longer wavelength and sufficient penetration depth in tissues and can potentially provide noninvasive postoperative stimulation. Moreover, it does not require genetic transfection, which has been associated with numerous technical and ethical issues, and avoids the difficulty of controlling injected nanoparticles by allowing the nanoparticle transducers to function at the implanted sites. The findings confirmed the possible involvement of transient membrane disruption and calcium ion activation channels and the reasons behind the long decay constant.

The repair of the nervous system is one of the great challenges of modern medicine. Although significant advances have been made in cell-based therapies, nanotechnologies, and novel biomaterials, as well as a better understanding of the nervous system’s knowledge, however,  tissue engineering advocates the combination of innovative biocompatible scaffold like the one reported by Nan Zhang and colleagues together with cells and bioactive molecules to mimic perfectly the environment to regenerate while supporting the repair of new tissue. Of course, more multidisciplinary approaches and research will be needed in the future to apply these therapeutic strategies in clinics. 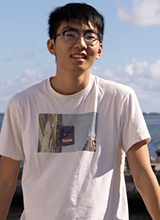 Nan Zheng received his BEng degree from Southern University of Science and Technology. He is currently a PhD candidate in the Division of Materials Science and Engineering at Boston University. His research interests are multifunctional tissue scaffolds and neural interfaces.