Two-dimensional materials often offer excellent conductive properties when compared to bulk materials. This attribute makes them suitable candidates as they possess interesting functionalities for future technological applications. Currently, graphene and silicene are typical examples of such materials whose van-der-Waals structures can be created by basically depositing exfoliated flakes onto the substrate of interest. However, a critical drawback has remained resilient in that it is very difficult to ensure homogenous deposition of ultrathin layers on centimeter scale. As a consequence, this has limited the full exploitation of this interesting class of materials. Additionally, there is a general need, desire and urge to develop a process that can be employed in the deposition of a nanoscale film on large areas from liquid phase.

German researchers led by Professor Christiane Helm from the Institute for Physics University of Greifswald developed a novel deposition technique that allowed for ultrathin conductive gallium-containing layers to be prepared at ambient conditions on wafer-scaled areas. Sebastian Runde says “From an ecological and economical point of view the preparation of thin metal films without vacuum techniques or electroplating is highly desirable”. They focused on forming multi layers by repetitive deposition procedure using the unique wetting properties of Gallium. Their work is currently published in the research journal, Advanced Material Interfaces.

The research team commenced with the film preparation where gallium containing films were deposited on a substrate of either glass, mica or silica held in a rectangular aperture of specific dimensions. Next, X-Ray reflectivity experiments were conducted at ambient conditions after which the deposited films were modeled into a series of homogenous slabs each parameterized by its thickness. They then undertook atomic microscopy imaging that were recorded using a conventional tapping mode cantilevers which was closely followed by UV–Vis Absorption Measurements. Lastly, the electronic properties of the samples were determined.

The authors observed that, from the high-resolution structural analysis using X-ray reﬂectometry, the multilayer thickness was proportional to the number of deposition cycles, yielding a highly reproducible single layer thickness of 2.9 ± 0.2 nm. Furthermore, the researchers noted that single layers were comprised of an intricate hetero-structure composed of nanometer-thin metallic Gallium core, which was surrounded by stabilizing gallium (hydr)oxide skin layers.

The study successfully demonstrated the deposition process of conductive, nanometer-thin metallic coatings on nonconductive samples at ambient conditions using a warm metal droplet for the first time. Specifically, they showed that such nanometer-thick hetero-structures consisting of metallic Gallium and Ga(OxHy) could be manually produced by inducing break-up after forced wetting of Gallium films. Altogether, this environmentally friendly technique was made possible by the very low melting temperature of Gallium, the unusually high surface tension of liquid Gallium, the strength by which the oxide skin of Gallium adheres to many different substrates as well as the speed with which a new oxide layer formed, both between the substrate and the droplet and also at the gallium/air interface.

Top: Schematics of induced film break up after forced wetting to prepare a nm-thin Ga-containing layer. The substrate (dark grey) is placed in a home-made set-up with a rectangular aperture (with side bars covered by an unpolished Si-wafer, violet) sitting on a heating plate. (i): front and side view: A fluid Ga droplet (40 °C) (light grey) is placed on the substrate. A silicon wafer (blue) is brought into contact with the Ga droplet. Ga wets the silicon wafer. The wetted Si wafer is tilted to approximately 45 – 60 degree (with respect to the surface normal) and is kept in a fixed position. (ii) The substrate is moved continuously underneath the wafer, forcing the Ga droplet to wet a large surface area by forming a mm-thick film. (iii) Dipping a pipette or a scalpel induces break-up. The Ga film retreats and typically forms two droplets at its edges. For enlargement of coated area tilt substrate. (iv) Between these two droplets, a nm-thick Ga-containing layer remains. Repeating the deposition steps (i-iv) allows production of heterocomposited multilayers. This protocol acts with other low melting elements and alloys too.

Bottom, left: A multilayer consisting of up to three stacked Ga/Ga(OxHy) – containing layers (as indicated by the arrows) on a soda-lime glass slide. It was prepared by repetition of the above described deposition procedure. With the deposition of each additional Ga layer, the absorption of the multilayered stack increases further, allowing areas of different multilayer thickness to be resolved with the bare eye. Bottom, centre: Representative electron density profile of a multilayer as determined with X-ray reflectometry. A layer model with a five times layered stack of Ga/GaOxHy on top a soda-lime glass substrate with roughness of 1.1 nm. The roughness decreases layer per layer with increasing layer number. Roughness, electron density and layer thicknesses were explore with XRR measurements.

Bottom, right: The plot show resistivity  with  measured with C-V-curves and calculated from  with U denoting the voltage applied to the multilayer, I the measured current through the multilayer, and w and  the geometrical width and the length of the multilayer in dependence of film thickness, for freshly prepared and aged films. Also shown is the resistivity of bulk Ga (solid line, ρ=0.141 µΩm). Additionally shown is the average optical absorbance (mean between 380 and 2200 nm). The absorbance follows the Beer-Lambert-Law with an extinction coefficient . Both resistivity and average absorbance are shown in dependence of the film thickness d. Thickness d is measured with X-ray Reflectivity and calculated from   (: wave vector transfer of adjacent intensity minima of XRR curves).

Sebastian Runde is currently a Ph.D. candidate in the group “Soft Matter and Biophysics” under the supervision of Prof. Dr. Christiane A. Helm at the Institute of Physics, University of Greifswald, Germany.

Sebastian Runde has completed an apprenticeship training as a car mechanic and was certificated by the car-guild Obereichsfeld, Eichsfeld, Germany in January 2003. After working a few years in industry he continued his education and absolve his university of applied sciences entrance qualification in June 2008. Afterwards he obtained a Bachelor degree in Environmental Engineering from University of Applied Sciences Nordhausen, Germany in January 2012. In April 2016, he completed his Master’s with a Master in Environmental Sciences with focal point in Environmental Physics at University of Greifswald, Germany. In May 2016, Sebastian Runde started to work on his Ph.D.

He is interested in basic research as well as in technical applications. His focus is the development, characterization and optimization of transparent and electronic conductive 2D materials consisting of liquid metals and alloys.

His research interests also include innovative designs to produces metallic coatings and their characterization with techniques like X-ray reflectivity, Atomic Force Microscopy, contact angle and wetting properties, optical microscopy, conductivity and Hall-effect measurements as well as the development of new experimental set-ups. 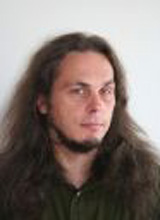 Dr. Heiko Ahrens is associated with research group,  Soft Matter and Biophysics at the University of Greifswald (Germany).

Heiko Ahrens received a physics diploma in 1994 from the University of Göttingen (Germany). In his diploma thesis he studied the optical properties of samarium ions in a lithium borate tungstate glass matrix.

Since 1996 he worked in the group of Christiane Helm on organic thin films at first at University of Mainz and since 2000 in Greifswald. He received a PhD in 2005 about “Vertical structure and horizontal order of molecular thin polymer films at the air-water interface”.

He investigates self organized monolayers of amphiphilic molecules at the air water interface on a Langmuir trough. His main expertise is X-ray reflectivity, which allows to describe a thin film as a stack of layers with different electron density. These can be attributed to different atoms or functional groups. Thus molecular arrangement and surface coverage are determined. He uses grazing incidence X-ray diffraction to study the ordering in two dimensions. Additional methods are thermodynamic characterization and Brewster angle microscopy of amphiphilic monolayers.

Prof. Christiane A. Helm studied physics at the Technical University of Munich (Germany) and received her PhD in 1983. During this time, she characterized model lipid membranes with X-ray techniques in the lab of Prof. Erich Sackmann. She was supervised by Prof. Helmuth Möhwald who introduced her to the concept of optimizing a method to learn the most about the investigated system. After a postdoctoral stay in Santa Barbara (USA, 1988-1990) and a position as junior group leader in Mainz (1990-1996), she got her first professorship at Saarland University in 1999. A year later, she moved to Greifswald. Central topics of her research are thin films consisting of self-organizing systems, and for biological applications. The work featured was motivated by her interest in electrically active implants.