Numerical dispersion and attenuation are commonly seen in finite element and finite difference wave propagation solutions of physical problems.  The errors introduced are a result of  the spatial and temporal discretizations used to solve transient wave propagations. To achieve accurate solutions of complex problems, the spatial and temporal discretizations should be selected according to the dispersion (period elongation) and attenuation (amplitude decay) properties of the methods used.

Professor Klaus-Jürgen Bathe, a pioneer and world famous researcher in the field of finite element analysis and applications, and his PhD student Ki-Tae Kim at the Massachusetts Institute of Technology examined the use of the Method of Finite Spheres with the Bathe method  to solve transient wave propagation problems. The new findings are now published in the peer-reviewed international journal, Computers and Structures.

The Bathe method, an implicit time integration method, gave accurate results when used with the Method of Finite Spheres enriched with harmonic functions. The important property of the Bathe method is that the high frequencies which can not be accurately resolved by the spatial discretization used are cut-out while the low frequency response is accurately solved for. The same property was earlier also observed when using bi-linear finite elements but with the Method of Finite Spheres much more reliable and accurate results are obtained.

Kim and Bathe used the Method of Finite Spheres with bi-linear polynomials and trigonometric functions as  local basis to calculate the response solutions, and a very important observation was made: The accuracy of the predicted response increases as the CFL number is decreased. This solution behavior  using uniform spatial discretizations did not depend on any specific direction of wave travel. Hence multiple waves of different velocities and with different directions can be directly solved for accurately. This observation is in contrast to what is seen when traditional finite element and finite difference discretizations are used with explicit or implicit time integration schemes.

The authors successfully solved transient wave propagation problems with high accuracy. However, since in the current paper they only considered uniformly distributed spheres of the same radius in two-dimensional analyses and only one time integration method, further studies would be valuable using different arrangements of spheres, different time integration schemes, for two- and three-dimensional problems, and using more general schemes based on  ‘overlapping finite elements’. 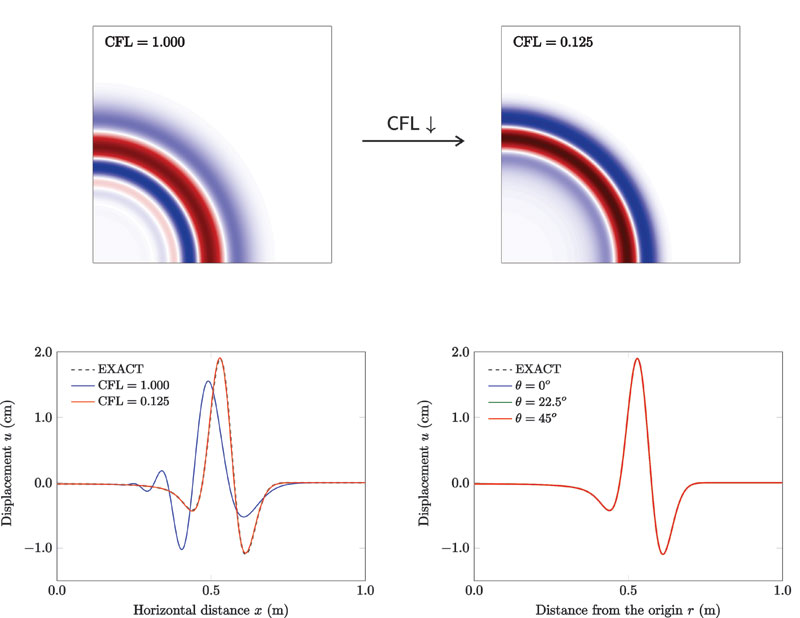 Klaus-Jürgen Bathe is Professor of Mechanical Engineering at the Massachusetts Institute of Technology. He performs research in the areas of applied and computational mechanics of structures, fluids, and electromagnetics. Professor Bathe is also Founder and Director of the company ADINA R & D, Inc. where he leads the development of the ADINA system, used world-wide, for the analysis of structures, fluids, and multi-physics problems.

He has published numerous articles, six textbooks and the book To Enrich Life. His book Finite Element Procedures is widely cited, and the latest version is available for download on his MIT web page. With his work he has bridged the worlds of Academia and Industry.

He is a co-editor of the international journal Computers and Structures, and the Editor of the proceedings of twelve M.I.T. Conferences on Nonlinear Finite Element Analysis and seven M.I.T. Conferences on Computational Fluid and Solid Mechanics. He has been honored by the ASME, ASCE, U.S. National Academy of Engineering, M.I.T., and many honorary doctorates for his teaching, his pioneering, fundamental and widely used contributions in computational mechanics, and for bridging Academia and Industry.

More information is given on these web sites:  Wikipedia and MIT.