The effects of coupling, nonlocality, and nonlinearities

Noteworthy literature has shown that composite lead-free piezoelectric ceramic exhibits excellent piezoelectric properties. In addition to this, lead-free piezocomposites offer the promise of an environmentally-friendly alternative to lead-based materials for conversion of mechanical stimuli into electrical energy. As such, they have drawn worldwide attention in academia and research.  Nonetheless, lead-free materials lag behind lead-based materials in terms of their performance. The performance issues can be typically addressed by tuning the mechanical electrical, and crystalline structural properties of the matrix and the piezoelectric inclusions. In fact, various design pathways have been proposed. More so, noteworthy efforts to both model and experimentally demonstrate these design pathways have also been reported. However, in the aspect of design, most of these efforts overlook the contributions due to several important physical effects.

Generally, lead-free piezocomposites are an ecofriendly route for sensing and harvesting energy from mechanical stimuli and it is important to develop accurate models which can capture essential physical processes underlying their performance. Unfortunately, current piezocomposite design heavily relies on the linear piezoelectric model which neglect nonlocal and nonlinear electro-elastic processes. To address this, Dr. Jagdish A. Krishnaswamy (Post-doctoral fellow) and Professor Roderick Melnik from the Wilfrid Laurier University in Canada, in collaboration with Dr. Federico C. Buroni, Dr. Luis Rodriguez-Tembleque and Professor Andres Saez at the University of Sevilla in Spain developed a new and more accurate modelling paradigm to determine the contributions from nonlocal flexoelectric and nonlinear electrostrictive effects towards the performance of lead-free piezocomposites. Their work is currently published in the research journal, Composite Structures.

In their approach, the research team first developed a fully coupled electro-elastic model, starting from free-energy considerations, which could simultaneously account for the linear-piezoelectric, nonlinear and nonlocal effects in a lead-free composite architecture. Next, they evaluated the contributions of each of these effects towards the electro-elastic response of a two-component piezocomposite consisting of a polymer matrix with embedded piezoelectric micro-sized inclusions. Overall, they evaluated the contribution of the effects in a three-component composite architecture consisting of a CNT-modified matrix with polycrystalline piezoelectric inclusions.

The authors reported that in the case of microscale randomly shaped piezoelectric inclusions which represent a practical scenario, the flexoelectric effect did not contribute appreciably towards the piezoelectric response. However, the nonlinear electrostrictive effects imparted significant strain-dependent responses. Further, in nano-modified composites, the team found out that the nonlinear electro-mechanical coupling can have different effects on the transverse and the longitudinal electro-elastic responses. In particular, the longitudinal electric field response, with the nonlinear contribution, was seen to be less sensitive to the polycrystalline structure of the piezoelectric inclusions.

As an important extension of this effort, the group recently applied the developed model to understand size-dependent flexoelectricity in geometrically anisotropic piezocomposite structures. Taking an example of a two-dimensional tapered structure, the group was able to demonstrate significant size-dependent enhancements in the piezoelectric response at small length scales. The best enhancements were observed at lower inclusion concentrations and with the inclusions positioned along the tapered surfaces rather than in the bulk of the composite. This serves as a demonstration that significantly high piezoelectric responses can be obtained at low inclusion concentrations by strategically tuning the shape of the composite structure and the size and spatial distribution of the inclusions.

In summary, the study developed a mathematical paradigm to model piezoelectric composites by taking into account important physical effects such as nonlocal flexoelectric and nonlinear electro-strictive effects. Generally, the observation reported provide critical insight into the nonlinear behavior of piezocomposites and emphasize the importance of developing advanced models to describe electro-elastic behavior. A further significant outcome led to obtaining insights into tuning the shape and size of the composite structure and the piezoelectric inclusions to maximize flexoelectric size-dependent enhancements at low inclusion concentrations to design superior piezoelectric materials. In a statement to Advances in Engineering, Dr. Jagdish A. Krishnaswamy, first author emphasized that their models can in fact act as a starting point for the design of efficient piezocomposites and directed experimental efforts to tap into these coupled electromechanical effects to improve piezoelectric performance. 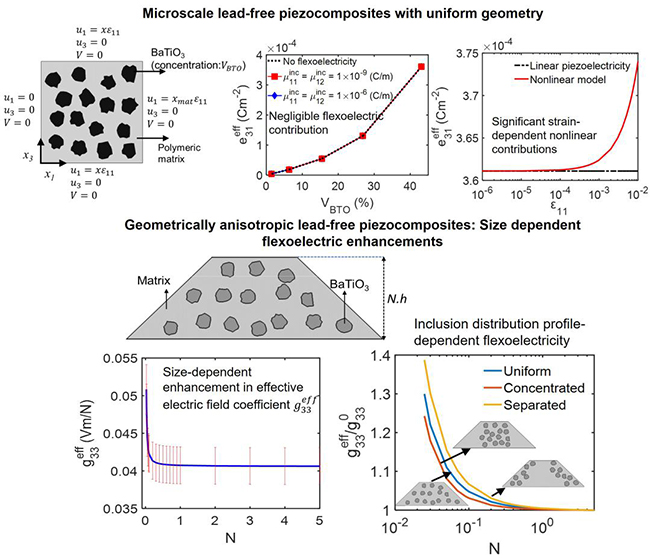 Roderick Melnik is a Full Professor at the Wilfrid Laurier University in Waterloo, Canada. He is a Tier I Canada Research Chair in Mathematical Modelling. He is affiliated also with the University of Waterloo as well as with the BCAM Research Center in Europe. Before joining Laurier, Professor Melnik held senior professorial and research positions in the USA, Europe, and Australia. He remains associated with Syddansk University in Denmark where he served as Head of Mathematical Modelling and Engineering Mathematics at the Mads Clausen Institute for a number of years. Later, he was a Full Professor in the Computational Analysis and 2 Modelling Program at the Louisiana Tech University in the USA from where he moved to Canada in 2004. Dr Melnik has also experience in working as a scientist outside of academia. In the late 1990s, he held the position of senior mathematician at the Commonwealth Scientific and Industrial Research Organisation in Sydney, Australia, working in the Division of Mathematical and Information Sciences until he joined the Syddansk University in Denmark as full professor. Dr Melnik received his M.Sc. degree in Applied Mathematics and Ph.D. degree in Computational Mathematics from the Kiev State University in 1985 and 1989, respectively. Since 1989 Professor Melnik held academic tenures in Europe, Australia, and North America and has published extensively in the field of applied mathematics, computational sciences, and mathematical modelling in sciences and technology. As an active researcher and academic, he is involved in numerous editorial duties and professional services in the applied mathematics, modelling, and a larger scientific community. He is an active member in major professional societies, including the American Society of Mechanical Engineers, Society of Industrial and Applied Mathematics, Canadian Applied and Industrial Mathematics Society and its analogue in Australia ( ANZIAM ), and the New York Academy of Sciences.

Dr Melnik was the recipient of the Hans Christian Andersen Academy Fellowship Award in Denmark with only two such awards that were given annually to researchers worldwide. He was also a visiting fellow at the Isaac Newton Institute of the University of Cambridge in England, at the Institute for Mathematics and its Applications of the University of Minnesota in the USA, the Center of Excellence in Applied Mathematics in Spain, and other research institutions in Europe, North America, and Australia.

Dr. Federico C. Buroni is an Associate Professor in the Department of Mechanical Engineering & Manufacturing at the University of Seville (Spain). He has completed a Mechanical Engineering (5-years) degree from the Universidad Nacional de Mar del Plata in Argentina, and a M.Sc. (2-years) degree from the Universidade Federal do Rio Grande do Sul in Brazil. In 2012 he did his Ph.D thesis entitled “Three-dimensional Green’s functions for anisotropic and multifield materials” at University of Seville, obtaining (highest) “cum laude” designation. His thesis led him to receive the distinction of receiving the “Premio Extraordinario de Doctorado” award. After that he got a position as an Assistant Professor at the University of Seville. During his postdoctoral stage he had the opportunity to complete research  3 stays at the Rutgers University (USA), Universidad Nacional de Mar del Plata (Argentina), and the University of Bristol (UK) as Research Fellow. He has also been awarded with a Postdoctoral Scholarship in order to visit the University of Oxford under the ”José Castillejo” Program for Young Doctors sponsored by the Ministerio de Educación, Cultura y Deporte of Spain. He has participated as scientific committee in several international congress and he is cofounder and member of the SEMTA (Sociedad Española de Mecánica Teórica y Aplicada) association. Currently he is Principal Investigator of two research projects founded by the Spanish government.

His main research interests are related to the micromechanics, computational modelling and theory of multifunctional composites and materials. Through his research he has presented several contributions related to anisotropic elasticity, Green’s functions and the boundary element method for coupled problems.

Dr. Luis Rodríguez-Tembleque is an Associate Professor in the Department of Continuum Mechanics and Theory of Structures at the Escuela Técnica Superior de Ingeniería (ETSI) at the Universidad de Sevilla, Spain. He is founder member of the Spanish Society of Theoretical and Applied Mechanics (SEMTA) and a member of the European Mechanics Society (EUROMECH) and the Spanish Society of Numerical Methods in Engineering (SEMNI).

His main research interests are focused on computational mechanics with emphasis on computational contact mechanics, substructure coupling techniques, integrity problems and multiscale modelling in advanced (multifield and multifunctional) materials systems (i.e. piezoelectric and nanocomposites). He has edited three books and he has published several chapters and papers in scientific journals and conference proceedings.

His scientific contributions have mainly focused on characterizing the dynamic behavior of structures and on applications related to structural integrity. His seminal contributions focused on the development of models and numerical tools (based on the Boundary Element Method and, to a lesser extent, on the Extended Finite Element Method) for the simulation of damage in structural components built with advanced materials. The analyzed material models encompass from composites to functional materials, which present a multi-field coupling between their elastic and electric/magnetic properties (for instance piezoelectric or magnetoelectroelastic materials). More recently, his research has extended to the field of experimental identification of the dynamic properties of structures, with application to aeronautical and, fundamentally, civil engineering structures (monitoring of structural integrity, rehabilitation of masonry constructions, behavior of pedestrian footbridges); as well as to the design and development of sensors based on carbon nanotube-reinforced elements (CNT) and lead-free piezoelectrics, aimed at their subsequent use in damage detection applications.

He has co-authored more than 250 publications, including research papers in scientific journals, books, book chapters and conference proceedings and he has lead several research projects on damage mechanics and structural integrity.

Jagdish A Krishnaswamy is a post-doctoral researcher at the iMEMS research group at the Indian Institute of Science, Bangalore, India. Previously, he was a post-doctoral fellow at the MS2Discovery interdisciplinary institute at Wilfrid Laurier University, Canada where he continues to be an affiliate. He obtained his PhD in nano-science and engineering from the Center for Nano Science and Technology, Indian Institute of Science, in 2018.

His research is focused on the design and development of novel multifunctional systems by addressing key challenges relating to material design, functional electronic device design, and system design. On the fundamental front, his contributions pertain to understanding the structure-property relations in materials and functional electronic devices with complex nanoscale and multiscale structures, development of facile fabrication methods for complex structured materials. The particular focus of this aspect of his work in optoelectronic and electromechanical materials and devices.