Research has shown that combustion-based methods can be reliable for space manufacturing as they use chemical energy stored in reactants thereby dramatically decreasing the external input energy requirements. Consequently, adept research on combustion of lunar or Martian regolith simulants with aluminum and magnesium has been undertaken with the goal of fabricating construction materials.

Recently, researchers at NASA Kennedy Space Center developed techniques for converting lunar or Martian regolith into ceramic tiles that were sufficiently strong, survived rocket plumes, and could be assembled into a pad. Unfortunately, it is still unclear how to build a reliable, robust pad from the developed tiles using relatively small amount of energy and materials. As such, it is imperative that the feasibility of joining the regolith tiles using self-propagating high-temperature reactions between two metal powders be investigated.

To this note, scientists at the University of Texas at El Paso: Professor Evgeny Shafirovich and Robert Ferguson (recently graduated with MSc program) from the Department of Mechanical Engineering investigated the feasibility of using a combustible mixture of metal powders for joining ceramic tiles made of regolith. In particular, they focused on undertaking an experimental investigation of self-sustained propagation of an intermetallic reaction over an aluminum/nickel mixture placed in a gap between two regolith ceramic tiles. Their work, supported by NASA, is currently published in the research journal, Combustion and Flame.

The experimental part of their studies involved the combustion of the stoichiometric aluminum/nickel mixture placed in a gap between two tiles, made of JSC-1A lunar regolith simulant, and studied in an argon environment at 1kPa pressure. The authors also measured the thermophysical properties of the tiles, the reactive mixture, and the combustion products. With these data, they have undertaken a modelling approach where they analyzed the investigated system using a model for steady propagation of the combustion wave over a condensed substance layer placed between two inert media.

The authors observed that stable propagation of the combustion front was achieved over the tested range of distances between the tiles. They also noted that front velocity increased as the distance increased. Overall, joining of the tiles was achieved in several experiments and improvement with increasing tile thickness was observed. Furthermore, testing of the model resulted in reasonable agreement between the experimental and modeling dependencies.

In summary, Evgeny Shafirovich and Robert Ferguson presented experimental and modeling work on combustion of Al–Ni mixture in the gap between two tiles, made of JSC-1A lunar regolith simulant. In general, both experimental and modeling results indicate a narrow quenching distance in the investigated system, which implies that a small amount of the reactive mixture would be required for joining regolith tiles on the Moon. Altogether, their work presents a new technique that employs in situ resource utilization principles, that is economical and efficient at the same time, and may pave the way for future space explorations. 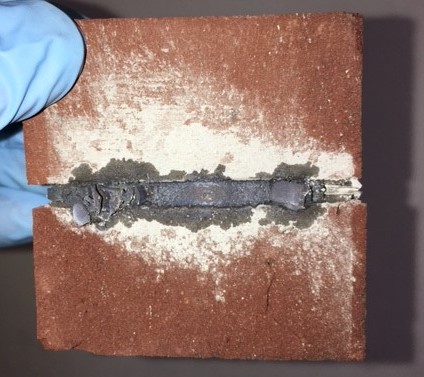 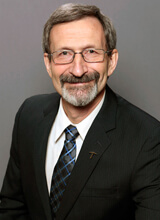 Dr. Evgeny Shafirovich is a Professor of Mechanical Engineering at the University of Texas at El Paso (UTEP). He received his PhD degree from the Institute of Chemical Physics, Russian Academy of Sciences, in 1988. Prior to joining UTEP in 2008, he conducted research at the Russian Academy of Sciences, CNRS (Orléans, France), the University of Notre Dame, and Purdue University. His research interests include combustion of energetic and gas-generating materials, combustion synthesis of advanced materials, and utilization of space resources. He is an Associate Fellow of the American Institute of Aeronautics and Astronautics (AIAA) and an Associate Editor of the International Journal of Energetic Materials and Chemical Propulsion.

Robert E. Ferguson II was born in Tampa, FL. He served in the U.S. Army in 2000-2013, and was awarded a Bronze Star for service in Afghanistan. In 2016, he received his B.S. degree in Mechanical Engineering from the University of Texas at El Paso (UTEP) and the NASA Harriet G. Jenkins Graduate Fellowship to study combustion joining of regolith tiles. He received his M.S. degree in Mechanical Engineering in May 2018. Currently, he is a PhD student at UTEP and his research focuses on green monopropellants for space applications.

Go To Combustion and Flame