Imaging graphene and graphite with atomic resolution in ambient conditions

Graphene, a single-atom thick layer of carbon, is explored for its use in nanotechnology as both a conductor and a transistor element. At this length scale, every atom is important for functionality, and applying this technology will demand quality control at the atomic level. Imaging surfaces at the atomic scale in real device conditions – that is, under ambient conditions – is challenging for a number of reasons, including the water layers that adsorb on almost every surface1–3.

Atomic force microscopy (AFM) is one solution. We have recently demonstrated that the qPlus atomic force microscope sensor can image salt crystals in ambient conditions with a resolution similar to that achievable in complex and expensive ultrahigh vacuum systems, namely atomic resolution2. The qPlus design is based on a quartz tuning fork, removing the requirement for optical alignment. Because it does not depend upon a commercial cantilever, we can choose the bulk tip material to be anything from silicon to sapphire1–4. We operate in a true non-contact mode, using the frequency shift of our oscillating tip as a measure of the tip-sample interaction. In pushing this technology, we found that the highest signal-to-noise ratio is achieved when the oscillation of the tip is smaller than the height of an individual water layer.

In our most recent work, we showed that the qPlus sensor can be used to resolve individual atoms of the graphene surface – a challenge for AFM because of the small spacing between atoms3. In this environment, the hydrophobic or hydrophilic nature of the tip material plays an important role in the forces that are present during imaging3. We continue to push the qPlus sensor in ambient environments with an outlook to a tabletop characterization method that can one day become a standard industrial tool.

In an AFM image of graphite, taken with a qPlus sensor, the rings of carbon that make up graphene can be seen. The blue “holes” are the hollow rings, around which six atoms are located. Because of the stacking with the lower layer, every second atom appears brighter – a subtle difference that can be clearly seen by brighter red dots. 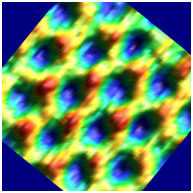 Imaging at the atomic scale using atomic force microscopy in biocompatible environments is an ongoing challenge. We demonstrate atomic resolution of graphite and hydrogen-intercalated graphene on SiC in air. The main challenges arise from the overall surface cleanliness and the water layers which form on almost all surfaces. To further investigate the influence of the water layers, we compare data taken with a hydrophilic bulk-silicon tip to a hydrophobic bulk-sapphire tip. While atomic resolution can be achieved with both tip materials at moderate interaction forces, there are strong differences in force versus distance spectra which relate to the water layers on the tips and samples. Imaging at very low tip–sample interaction forces results in the observation of large terraces of a naturally occurring stripe structure on the hydrogen-intercalated graphene. This structure has been previously reported on graphitic surfaces that are not covered with disordered adsorbates in ambient conditions (i.e., on graphite and bilayer graphene on SiC, but not on monolayer graphene on SiC). Both these observations indicate that hydrogen-intercalated graphene is close to an ideal graphene sample in ambient environments.