Contextually, molecular catalysis focuses on the molecular and atomic aspects of catalytic activation and reaction mechanisms, mainly in the field of chemical synthesis. At present, the development of novel molecular catalysts is one of the keys for paving the way to new transformations in organic synthesis. For instance, in the field of chiral Brønsted base catalysis, a long-standing issue is the expansion of the scope of pronucleophiles that are applicable to the enantioselective reactions. Conventionally, chiral tertiary amines have been widely employed as chiral Brønsted base catalysts. Recently published literature has revealed that, chiral uncharged organobases with higher basicity than tertiary amines, such as chiral guanidines, P1- phosphazenes, and cyclopentenimines, have also emerged as efficient chiral Brønsted base catalysts. However, the insufficient basicity of these conventional chiral organobases limits the scope of pronucleophiles to highly acidic compounds, such as β-dicarbonyl compounds and nitroalkanes, which restricts the viable molecular transformations that are available under chiral Brønsted base catalysis.

In their approach, the team explored a molecular design that was based on a conceptually new idea for a distinctive cooperative function by two organobases in a single catalyst molecule. In this view, prominent activity of the two organobases was demonstrated in the unprecedented enantioselective direct Mannich-type reaction of α-phenylthioacetate as a less acidic pronucleophile to construct a β-amino-α-thiocarbonyl scaffold.

In summary, the team revealed conceptually new chiral Brønsted base catalysts consisting of two different organobase functionalities, one of which functions as an organosuperbase and the other as the substrate recognition site. Their prominent activity, which stems from the distinctive cooperative function by the two organobases in a single catalyst molecule, was confirmed in the unprecedented enantioselective direct Mannich‐type reaction of α‐phenylthioacetate as a less acidic pronucleophile. In a statement to Advances in Engineering, Professor Masahiro Terada highlighted that the present achievement would provide a new guiding principle for the design and development of chiral Brønsted base catalysts and significantly broaden the utility of Brønsted base catalysis in asymmetric organic synthesis. 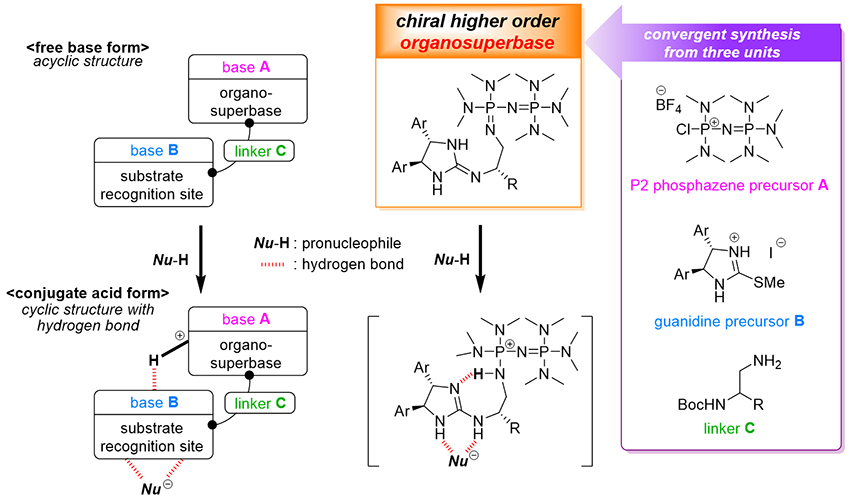 He has been a professor of chemistry at the Graduate School of Science, Tohoku University since 2006 and has been appointed to the Dean of Graduate School of Science from 2017. He is the recipient of: The Incentive Award in Synthetic Organic Chemistry, Japan (2003), The Chemical Society of Japan Award for Creative Work (2008), Mukaiyama Award (2010), Daiichi-Sankyo Award for Medicinal Organic Chemistry (2011), The Nagoya Silver Medal (2012), Molecular Chirality Award 2015 (2015), and Synthetic Organic Chemistry Award, Japan (2017).

His current research interests are the development of useful synthetic methods based on the design of novel chiral Brønsted acid and base catalysts as well as the utilization of transition metal catalysts. In particular, the development of binaphthol-derived chiral phosphoric acid catalysts is one of his representative works. A number of highly enantioselective transformations have been achieved using the chiral phosphoric acid catalysts and derivatives. Furthermore, as shown in the present work “Chiral Organosuperbase Catalysts Consisting of Two Different Organobase Functionalities”, design of higher order organosuperbase is also actively investigated in his group. In fact, his group has previously developed spiro-chiral bis(guanidino)iminophosphoranes as a chiral higher order organosuperbase catalyst.