There are several methods for obtaining nitrogen-containing motifs. Among them, the construction of C – N bond is widely preferred in organic and synthesis chemistry. In the last few decades, good progress in developing transition-metal catalytic C – N coupling reactions has been witnessed. However, the reaction methods used in most existing research works are limited and not suitable for constructing sp2 C – N bonds used to synthesis aryl amines. As an alternative and complementary reaction, sp3+ C – N bond formation has been proposed. It is constructed based on traditional reactions, such as reductive amination of carbonyl compounds, also used to develop sp2 C – N bonds. Nevertheless, developing different strategies for both sp2 and sp3 C – N formation has remained a great challenge despite its positive practical implication in synthetic chemistry.

Among the available carbon sources used in catalytic decarboxylative cross-coupling reactions involving the formation of C – N bonds, organic carboxylic acids are commonly used due to their ease of preparation, non-toxicity and high stability in both moisture and air. Despite the good progress, catalytic sp3 C – N formation reactions are sparse. This can be partly attributed to the lack of efficient methods for constructing sp3 C – N formations. The recently reported metal laphotoredox catalysis has emerged as a promising breakthrough and has been used in several reactions. Therefore, the development of effective methods for the construction of sp2 and sp3 C – N formations is highly desirable.

It has been hypothesized that decarboxylative C – N formations can be realized with carboxylic acids and electrophilic nitrogen sources instead of nitrogen nucleophiles and electrophilic carbon acid derivatives. Moreover, using organic azides in amination reactions has also increased due to their high compatibility with various functional groups. This, together with Curtius and Steglich rearrangement reactions, presents a new catalytic acid activation path with potential practical applications. Motivated by the previous findings, Dr. Yiping Zhang, Dr. Xia Ge, Professor Hongjian Lu, and Professor Guigen Li from Nanjing University studied the catalytic formation C – N formation reactions between organic azides and carboxylic acids for generating alkenyl, alkyl and aryl amines. Leveraging the neutral reaction conditions, the authors hope to develop a universal reaction for the efficient construction of both sp2 and sp3 C – N bonds. Their work is currently published in the research journal, Angewandte Chemie.

Results demonstrated the efficient preparation of α-chiral amines from α-chiral carboxylic acids. A high average efficiency of 87%, with only gaseous nitrogen and carbon dioxide as the by-products, was reported for all the examples prepared in the study. The advantages of the reaction method included its ease of operation, lack of additives, and the use of naturally abundant products and drug molecules. Additionally, the reaction utilized cheap and commercially available catalysts.

In summary, the authors developed a general method for decarboxylative C – N formation. The reaction worked well with different functional groups and carboxylic acids to provide useful carbamates. The development of different processes for the rapid construction of primary amines and ureas was also proposed. In a statement to Advances in Engineering, the authors explained their study provided an economically feasible path for synthesizing versatile amino derivatives with potential applications in pharmaceuticals and natural prods synthesis. 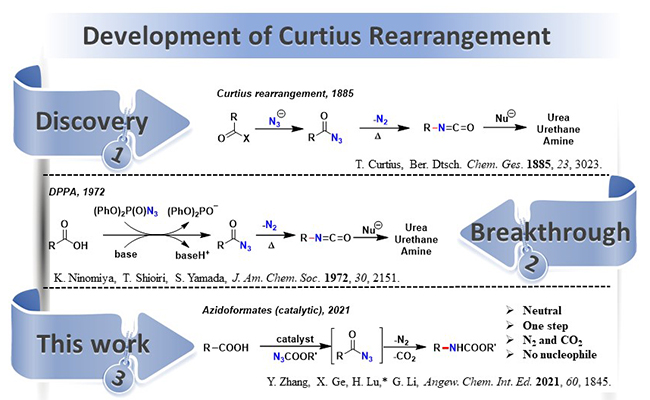 Hongjian Lu received his BS degree in 2001 from the University of Science and Technology of China. He conducted his graduate research on regiospecific radical cyclization and coppercatalyzed intramolecular vinylation at Shanghai Institute of Organic Chemistry (SIOC), under the direction of Professor Chao-Zhong Li, where he received his PhD degree in 2006. He then undertook postdoctoral work with Professor X. Peter Zhang at the University of South Florida during the period of 2007–2012. at then joined the research group of in 2007 as a postdoctoral associate and has been working on the design and synthesis of new chiral porphyrins for Co(II)-catalyzed C–H amination and related nitrene transfer reactions with azides. In 2012, Dr Lu began his independent career as Associate Professor of Chemistry at the Nanjing University, where he held the position of Distinguished Professor of Jiangsu Province. In 2018, Dr Lu was promoted to Professor of Chemistry at the Nanjing University. A major current research theme in his group is the development of novel organic synthetic methodologies.