The fundamentals of a wide variety of ordered phases in condensed matter is the anisotropy of their building blocks. Anisotropic colloidal particles serve as the ideal model systems in elucidating the fundamental role of interaction anisotropy in this kind of ordering. Sticky patchy particles that bond with each other through interactive attraction between the patches on their surface can be used to implement directional bonding between the building blocks. Previous studies have shown that purely orientational ordering can be an alternative to positional ordering for designing self-assembled mesostructures, where spatial heterogeneity can arise due to the hybrid structure of the patchy particle itself. More so, for empirical cases, short-range interparticle interactions must be repulsive to decrease aggregation by van der Waals attraction.  Therefore, to observe (equilibrium) orientational order in experiments, patchy particles must be slightly separated from each other so as to acquire a rotational degree of freedom.  Thus, for orientational ordering in patchy particles the packing density dependence and/or the role of a small shape anisotropy have not been convincingly studied.

A recent study by Professors Yasutaka Iwashita and Yasuyuki Kimura at Kyushu University in Japan presented an in-depth analysis of the effects of packing density on the orientational order in particles with a moderately sticky patch, predominantly in the density range where particles are closely packed and display a crystalline positional order.  In this work they hoped to demonstrate the sensitivity of the ordering mechanism and the resulting order to the packing density, where the effect of such a tiny shape anisotropy is clearly observable owing to the patch opacity. Their work is now published in the research journal, Soft Matter.

The researchers commenced the empirical procedure by thermally depositing a gold layer on a hemisphere of monodisperse silica particles following a thin adhesive layer of chromium. They then modified the gold surface with an ionic thiol to prevent irreversible aggregation between the patches. The particles were then dispersed in a binary mixture of an organic solvent and pure water for more than a day. Finally, the team then performed a standard Monte Carlo simulation to study the packing density dependence of orientational order in spherical one-patch particles.

The authors observed that a small decrease in the density allowed free rotational motion while translation was restricted to vibrational motion. This drastically changed the ordering mechanism, giving rise to a patch-size dependent equilibrium orientational order. Furthermore, within this density regime, the researchers found yet another density-dependent transition within the tetragonal bilayer. This transition was noted to have been reproduced by numerical simulation assuming no shape anisotropy, indicating that shape anisotropy was unnecessary for the transition and translational entropy which considerably affects the equilibrium orientational order even in such a closely packed structure.

Yasutaka Iwashita and Yasuyuki Kimura study sheds light on the fundamental mechanisms behind the orientational ordering of slightly aspherical particles with short-range patchy attraction under dense packing. Moreover, their study has demonstrated that the patchy particles represent an ideal system for studying the effect of such a small shape anisotropy because of the two substantial roles played by the deposited patch, which are: it imparts a precisely-controlled small shape anisotropy to particles and facilitates visualization of the particle orientation. 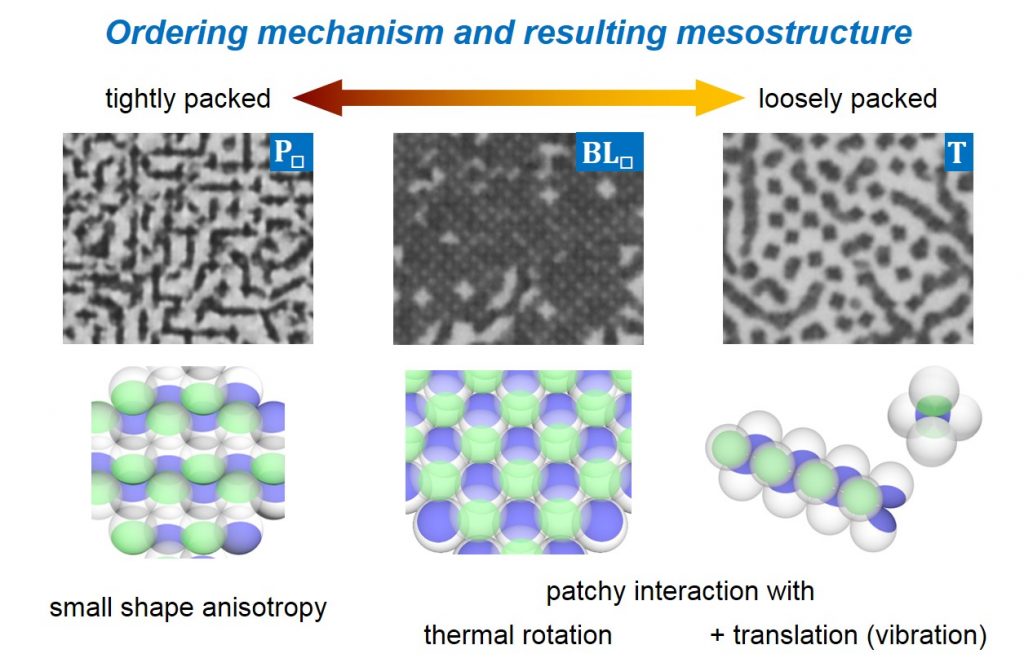 Yasutaka Iwashita is an assistant professor at Kyushu University. He received his diploma in Technology from the University of Tokyo in 1999.

He then got his Ph.D. in Technology in 2004 for a work about the patterns in Lyotropic liquid crystals. He spent one and a half years as PostDoc at the Institute of Industrial Science, Tokyo, Japan, in the group of Prof. Hajime Tanaka, working on the phase-separating Lyotropic liquid crystals. He then spent two and a half years as PostDoc at Max Planck Institute for Dynamics and Self-Organization, Goettingen, Germany, directed by Prof. Stephan Herminghaus, in the group of Dr. Christian Bahr. He worked on the microfluidic devise-based X-ray lens and ultrathin liquid crystal films there.

Since 2010 he has studied self-assembled structures in patchy particles, colloidal particles bearing anisotropic surface chemistry. By tuning patchy structure, surface chemistry, interaction between the particles and spatial confinement, he experimentally discovered stable cluster phase and various patterns by orientational ordering, together with the clarification of the formation mechanism by computer simulation, and revealed structural details in the emulsion droplets stabilized by the amphiphilic patchy particles.