Amongst the four main noncovalent bond interactions, hydrogen bond is the most important. As a result, extensive studies regarding both its theoretical and experimental aspects have been published. In recent times,a similar type of noncovalent interaction, the halogen bond, has also attracted much attention. The latter has not been studied extensively, while much of what that has been published focuses on crystallography in the solid phase and quantum-chemical calculations in gas phase. Halogenation has been seen to be a vital strategy for drug design, as it merits on increased membrane permeability and extension of the drug’s circulation life.It however faces some critical drawbacks which have potential to be solved using ionic liquids. Regardless of the fact that halogen-bonding interactions involving ionic liquids have shown such great potential, research into the properties and nature of ionic liquids remain scarce. Worse off, the interaction modes and solution-structure details in related binary mixtures regarding the two are largely unclear.

Recently, a team of researchers at Tsinghua University led by Professor Zhi-Wu Yu investigated the interaction between ionic liquids and halobenzenes; the most common halogenated moiety in drug-like compounds. Specifically, they carried out an in-depth assessment of the noncovalent interactions between 1-butyl-3-methyl-imidazolium acetate and three halobenzenes C6F5X (X=I, Br, H). Their work is currently published in the research journal, ChemPhysChem..

In brief, the research commenced with the selection of a representative ionic liquid, 1-butyl-3-methyl imidazolium acetate, as a halogen/hydrogen bond acceptor, and three pharmaceutical analogues (halobenzenes) with halogen-/hydrogen-bond donor characters for use in the assessment of the halogen- and hydrogen-bonding interactions. Next, the researchers employed excess infrared spectroscopy, two-dimensional correlation spectroscopy and density functional theory calculations to carry out their investigations.

The authors noted that the iodine derivative showed the strongest interaction with the ionic liquid, followed by C6F5Br and C6F5H. Using the aforementioned characterization and investigation techniques, the researchers were able to differentiate various interaction modes. In addition, they identified three complexes, namely anion-C6F5I, anion-2 C6F5I, and ionpair-C6F5I in the ionic liquid-C6F5I system. Furthermore, they recorded that only the ion-pair-C6F5Br/C6F5H complexes, together with self-associates, were found in the other two systems.

In summary, Professor Zhi-Wu Yu and his research team presented an in-depth investigation of three binary systems composed of representative ionic liquid and halobenzene, using spectroscopy and quantum-chemical calculation methods. In general, the results obtained suggest that the acetate-based ionic liquids have potential to be used to dissolve drug molecules comprised of functional groups of halogen-bond donating ability, particularly when iodine is the halogen element. Altogether, the observations presented here will offer great assistance to drug design and applications of acetate-based ionic liquids in medical chemistry and other fields. 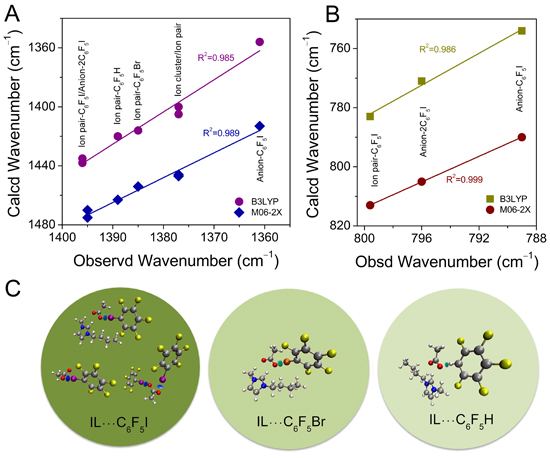 Jing Xu received her bachelor degree in Chemistry from Jilin University in 2014. She is currently a PhD candidate at the department of Chemistry in Tsinghua University. Her research is focus on investigating structure and properties of liquid binary systems by excess spectroscopy and quantum chemical calculations.

Yu Zhou received her Ph. D. in Chemistry from the Tsinghua University in 2016. She is currently a senior lecturer at the College of Chemistry and Chemical Engineering, Qingdao University. Her current research interests include hydrogen bonding interaction, ionic liquid, solution chemistry, spectroscopy, DFT Calculation, molecular structure and dynamics, and intermolecular interactions.