Explaining the Gouy phase shift as an energetic effect.

A new theoretical approach describing how the photon can be assumed to be embedded with its relativistic mass as a particle into the electromagnetic wave allows explaining the Gouy phase shift as an energetic effect.

The Gouy effect already has been detected by L. G. Gouy almost 130 years ago. By the use of a simple apparatus he created an overlap of a focused and a plane wave both coming from the same source, and detected circular interference fringes near the focus of the focused beam. He described this effect in the article “Sur une propriété nouvelle des ondes lumineuses,” C. R. Acad. Sci. Paris 110, 1251 (1890). Since this effect is valid for any kind of optical (even microwave) beam, it is important for many optical devices even for the coupling of a beam into a wave guide. So far this effect has been explained by assuming that the focused beam somehow experiences an extra π phase shift when it passes through the focus with the consequence that the distance between the phase fronts of the beam increases near the focus. The computation of a mathematical expression describing this so called Gouy phase shift was possible by the use of wave optics. The dependence of this phase shift on the distance from the focus is shown by the lower part of the picture. To explain this important effect within a more fundamental physical context did not seem to be possible so far.

Recently, Professor Konrad Altmann at LAS-CAD GmbH in Germany provided a new important aspect concerning this fundamental question by explaining the Gouy Phase shift as an energetic effect. His work is published in the research journal, Continuum [1]. This new explanation is based on recent research work of Konrad Altmann published in Optics Express [2]. In this recent research work Konrad Altmann developed a new theoretical approach describing how the photon can be assumed to be embedded with its relativistic mass as a particle into the electromagnetic wave. To develop this new approach he considered the question why energy and mass density of an electromagnetic wave are propagating in the same direction. Consideration of this question involves a fundamental physical problem, since the propagation of the energy density is described by the Poynting vector, and the propagation of the mass density, which propagates with the wave according to E=mc², should propagate according to Newton’s first law. Therefore, the mass density should not change its propagation direction, even if the energy is propagating along a curved line. Konrad Altmann solved this problem by assuming that a transverse force is exerted on the mass density and in consequence of the photons which forces them to follow the energy density. This leads to the conclusion that the photons are moving with in a transverse potential which finally allows to describe the transverse quantum mechanical motion of the photon by a Schrödinger equation though the photon has no rest mass. In case of Gaussian waves this Schrödinger equation transforms into the Schrödinger equation of the harmonic oscillator.

Konrad Altmann used this Schrödinger equation to compute the expectation value of the square of the transverse quantum mechanical momentum of the photon which could be used to compute the mathematical expression describing the Gouy phase shift in agreement with wave optics. But moreover, by the use of this expectation value he could show that the energy Eph of the photon is the sum of an energy Enm(z) describing energy of the transverse quantum mechanical motion of the photon, where z is the distance from the focus, and an axial energy EG,nm(z) which Konrad Altmann designated as Gouy energy. In this way he could show that a local wavelength λnm(z)=hc/[Eph-Enm(z)] can be defined which describes the Gouy phase shift in agreement with wave optics. Here the subscripts n and m describe the transverse modes of a Gaussian wave. The upper part of the figure shows how this local wavelength changes with the distance from the focus. This seems to show that the deeper physically reason for the Gouy phase shift consists in the fact that the energy of the photon is increasingly converted into the energy of its transverse quantum mechanical motion when the photon approaches to focus. This allows to conclude that the Gouy phase shift is an energetic effect.

This study forms a fundamental basis for future work concerning the understanding of the propagation phenomena, and also for important practical photonics applications such as the coupling of a wave into a wave guide. 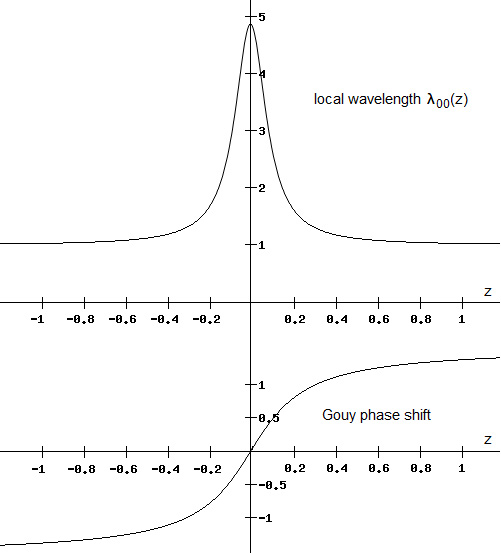 Prof. Dr. Konrad Altmann made his Diploma in Physics in 1972 and his PhD in 1975 with a thesis on theoretical molecular physics and computer simulation of molecular spectra, both at the at Ludwig-Maximilian University Munich. 1977-91 he was research engineer at the Messerschmitt-Bölkow-Blohm AG, Munich where he developed a computer program to model a gasdynamic CO2 – Laser. 1991-93 he was consultant for optics at the German Aerospace. 1993 he founded the founded the company LAS-CAD GmbH, and has been president of this company since this time.

In this function he developed the commercial computer program LASCAD for LASer Cavity Analysis and Design which has world¬wide been sold into 48 countries. This program integrates different simulation tools, necessary for the analysis of the multiphysics interaction in lasers, especially in diode pumped solid state lasers (DPSSL). Its easy to handle users interface provides the laser engineer with the ability of a quantitative understanding of the complicated effects in laser systems.

K. Altmann has over 50 years of progressively responsible experience in computational physics especially in the field of optics. He wrote 42 scientific publications in molecular physics, propagation engineering, especially laser beam propagation in the atmosphere, laser technology, and photonics.

He applied for more than 25 patents, of which 11 have been granted. In 2014 he was became an Adjunct Professor of the National Engineering Center for DPSSL of the Chinese Academy of Science. A biographical profile of K. Altmann can be found in Marquis Who’s Who in the World 2000 – 2014, and in Who’s Who in Science and Engineering 2001 – 2014.

A Fast and Simple Approach to Computational Peptidology