The durability of most electronic devises is directly proportional to the efficiency at which they repel moisture ingress. For most manufactures, in a bid to lengthen the life of their electronic products, they employ edge sealants (such as: frit seal, face seal and metal glass lead) onto the frame of the device. The desired properties of such edge sealant materials include high barrier properties, sufficient adhesion, high flexibility and ease of process-ability. Recently published studies have outlined that water vapor transmission, or permeability, is the product of solubility and diffusivity. Moreover, there has been numerous studies demonstrating that the addition of nanoclay to epoxies and other polymers can improve barrier properties. Nonetheless, there is a deficiency in research exploring the combination of liquid crystalline epoxy and the addition of nanoclay. Worse off, there is no reported study on its effect on the barrier performance.

Recently, Dow Chemical Company researchers: YuanQiao Rao, Andong Li and Kathleen O’Connell improved the overall performance of sealants by developing liquid processable materials that had enhanced water barrier properties and flexibility. They focused on the liquid crystalline epoxy containing stilbene and its nanocomposite containing montmorillonite clay so as to understand its barrier properties. Their work is currently published in the research journal, Polymer.

The authors observed that the liquid crystalline epoxy, EDHAMS, and its clay nanocomposite possessed excellent barrier properties, adhesion, bending flexibility, optical transparency, thermal stability and high strength. In addition, it was seen that the diffusivity in the liquid crystalline epoxy was one order of magnitude lower than that of bisphenol A epoxy. Even better, addition of 1% by volume of organoclay further resulted in reduced diffusivity by 2 times. Moreover, they also found out that the cavity size of the free volume of the liquid crystalline epoxy was much smaller than that of conventional bisphenol A epoxy as measured by positron annihilation lifetime spectroscopy, suggesting that the improved barrier property originated from the reduced free volume cavity size.

In a nutshell, the ever increasing demand for a suitable sealant material to protect electronic devices prompted Dow Chemical Company scientists to explore a novel approach for generating a liquid processible material of desirable flexibility and excellent barrier properties, and of great potential to be employed in electronic encapsulation. Generally, they mainly noted that the addition of small amounts of organo-modified clay significantly accelerated the curing speed and reduced the water permeability by half. Altogether, the developed material was of excellent adhesion, desired optical transparency and outstanding thermal stability and hence can enable many unique devices to be developed in the future.

Kathleen O’Connell is the Global Director of Display Technologies R&D and spent 3 years on assignment at the Dow Seoul Technology Center in South Korea.

Kathleen received her B.A. in Chemistry from the College of the Holy Cross and her Ph.D. in Analytical Chemistry from the University of Wisconsin, Madison. She was awarded a NATO postdoctoral fellowship and continued her research in organic electrochemistry at the University of Dijon, France. Kathleen began her career in industry in the field of electrochemical sensors for medical diagnostics working for a division of Allied Chemical.

Dr. Andong Liu is a research in the Dow Chemical Company in China. He received his PhD from ICCAS in 2007 and was a researcher in Royal Institute of Technology in Sweden for 4 years, and then joined in Dow Chemical as a scientist in the end of 2011. Mainly focused on the synthesis of polymer, nanocomposites, bionanocomposites, LCPs，packaging and elastomers, et. During this period, he published more than 30 papers on the internal journals and owned 12 PCTs. 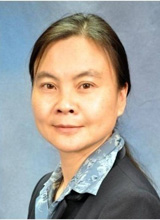 Dr. YuanQiao Rao is a Fellow in the Dow Chemical Company with decades of research experience in optical materials, barrier/selectively transport materials, adhesion, scratch-mar and mechanical and thermal mechanical properties, thin film/coatings/membranes/fibers, nanocomposites and hybrid materials. She has a B.S in Chemical Engineering from Tsinghua University in China and Ph.D. in Polymer Science and Engineering from UMass-Amherst. She has numerous peer reviewed publications in Macromolecules, Langmuir and Polymer. She has 31 granted US patents and 30 journal publications and has delivered 39 invited talks at conferences and universities.