Prepared by the One-Pot Method for NO Direct Decomposition

Nitrogen oxide (NO) is an extremely pollutant gas with severe effects on both human health and the environment. As such, reducing NO emission, alongside other greenhouse gases, has been championed in a combined effort to protect the environment from pollution. To date, several NO removal technologies have been developed. Among them, NO direct decomposition is the most promising and yet the most challenging. The approach is eco-friendly and does not require reductants like hydrocarbons, even though it uses catalysts to accelerate the reaction processes. Unfortunately, NO direct decomposition is far from being commercialized for large-scale applications primarily due to the lack of appropriate and cost-effective catalysts. Therefore, the development of effective and efficient catalysts for such applications is highly desirable.

So far, the available catalysts such as the noble metals (Pt) and perovskite-type metal oxides (ABO3) have several drawbacks, including high cost, poor oxidation and sintering resistance, and low activity that hinder their performance. The unique properties of CeO2 render it possible use in NO decomposition. Typically, CeO2 is characterized by high oxygen storage capacity and  efficient conversion between Ce3+ and Ce4+. Despite the effectiveness of CeO2, the impact of the secondary CeO2 component is not fully explored in NO direct decomposition.

Recent research findings revealed that the catalytic performance of catalysts used in NO decomposition is significantly affected by both the catalyst composition and the preparation method. The emergence of the one-pot approach for fabricating multi-component materials with remarkably higher component homogenization and better performance provided insights into the development of high-performance catalysts. Motivated by the results, a group of researchers: Pingping Xie, Xin Yong, Miao Wei, Prof. Yongdan Li, and Dr. Cuijuan Zhang from the Tianjin University, developed high performance BaCoO3-CeO2 catalysts for NO direct decomposition. Their research work is currently published in the journal, ChemCatChem.

Here, the authors utilized the one-pot method to prepare the BaCoO3-CeO2 catalysts. Specifically, they investigated the catalytic performance of the resultant catalysts towards NO direct decomposition at different temperatures ranging from 500 to 850 °C and compared the results to those produced by pure BaCoO3 catalyst. Also, the underlying mechanisms behind the performance of the proposed catalyst were analyzed using various characterization techniques like X-ray diffraction.

The authors reported that the developed BaCoO3-CeO2 catalysts exhibited remarkable performance toward NO direct decomposition. This included high activity, excellent oxygen resistance in the oxygen-containing atmosphere and decent durability partly due to the addition of CeO2. For example, the NO to N2 conversion of 5%BaCoO3-CeO2 catalyst was 57.2%, 70.1% and 75.6% at 700, 750 and 800 °C, respectively. Interestingly, the catalyst remained stable with a high conversation of 54.3% in the 10% oxygen at 800 °C. Unlike pure BaCoO3, the high performance of BaCoO3-CeO2 was attributed to the enhanced redox activity and oxygen mobility, and higher surface area induced by the unique properties of CeO2 and homogenous distribution of the components.

In a nutshell, the study reported the synthesis of high-performance BaCoO3-CeO2 catalysts for NO direct decomposition. Based on the results, the introduction of the CeO2 component played a significant role in enhancing its performance by acting as both sintering inhibitor and oxygen vacancy provider owing to its strong interaction with BaCoO3. Overall, the scalable fabrication process and high catalytic performance make BaCoO3-CeO2 a promising catalytic candidate for NO direct decomposition. In a statement to Advances in Engineering, Dr. Cuijuan Zhang noted that the useful insights provided in the study would enable the investigation of the activity and stability of the catalysts in real exhaust conditions for potential large-scale NO removal. 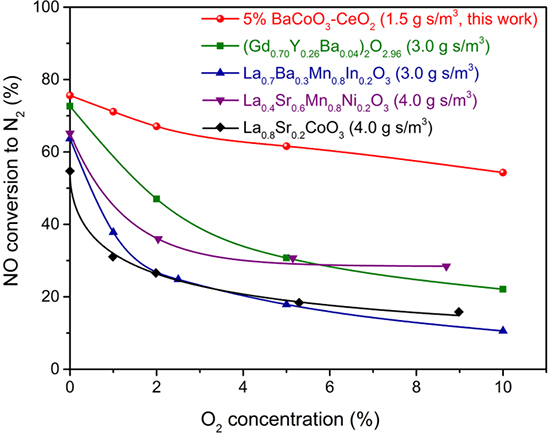 Cuijuan Zhang received her BS (2007) and PhD (2012) from University of Science and Technology Beijing, China. After working as a postdoc in University of Calgary (2012-2014) and University of South Carolina (2015-2016), she joined the School of Chemical Engineering and Technology, Tianjin University as an associate professor. Her current research focuses on the materials for environmental catalysis, electrocatalysis and batteries.