Composite materials have attracted significant attention owing to their excellent properties and potential industrial applications. Most structural composites are characterized based on their ability to withstand loads for longer time duration under critical environmental conditions. Some applications may require the joining of composite structures at various points. This has been successfully achieved through adhesively bonded joints which exhibit good damping, resistance and vibration properties. Therefore, it is important to investigate the behavior of these materials under both mechanical loads and environmental effects.

To this note, researchers at ENSTA Bretagne in France: Mourad Nachtane (PhD), Professor Mostapha Tarfaoui, Dr. Sassi Sonia, Dr. Ahmed el moumen together with Professor Dennoun Saifaoui from the Laboratory for Renewable Energy and Dynamics Systems in Morocco recently studied the influence of hydrothermal aging effects on the mechanical behaviors of adhesive bonded composite joints at high strain rates. The experiment was based on the Split Hopkinson Pressure Bar Machine, that was utilized to analyze the progression of the microstructural damages and the dynamic compressive properties of the composite joints. Their work is published in the journal, Composites Part B: Engineering.

First, the samples of the adhesively bonded composites were subjected to hydrothermal aging conditions, preferably 50°C of temperature and 80% of relative humidity at different time intervals. The hygrothermal aging experiment was used to determine the moisture absorption behaviors and the weight gained by the specimen as a function of time. Secondly, in-plane dynamic compression tests was conducted at different impact pressures to quantify the effect of hygrothermal aging on the dynamic response and kinetics of damage of the composite / adhesive assembly. . Finally, the strain-stress characteristics of the composite specimens were evaluated under severe hygrothermal conditions at higher strain rates in the 445-1240 s-1 range.

Environmental effects exhibited significant changes in the dynamic properties and damages behavior of the composite specimen. For instance, optical microscopy and scanning electron microscopy observations revealed failure modes for each specimen. For adhesively bonded composite joints, the moisture absorption amount was reported to about 0.28% of the weight at saturation level. In all the cases, however, an increase in the strain rates and moisture absorption resulted in a corresponding decrease in the failure stress, failures strain, and initial modulus. Moreover, the samples exhibited a decrease in the fracture strength with moisture absorption at higher strain rates and especially when the sample was loaded in the in-plane direction. This was attributed to the significant role of the matrix properties which were more prone to stain rate as compared to fiber dominant properties.

The strain rates and aging time highly influenced the dynamic compressed behaviors of the composite assemblies. The samples became more prone to damages with the increase in the strain rate. For example, laminated splitting failure was dominant at low strain rates while delamination dominated at higher strains. Furthermore, the main physical and chemical degradation of polymer structures due to water absorption was observed to be as a result of the leaching, hydrolysis, swelling and plasticization effects.

In summary, the scientists noted that critical understanding of the moisture absorption and desorption behavior is a crucial consideration in the evaluation of the perceived material and structural performance. Based on the study findings, Mourad Nachtane, first author mentioned that their study provides essential results that will pave way for advancing further investigation in hydrothermal aging effects in other materials. 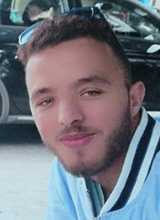 Mourad NACHTANE was born in Casablanca, Morocco, in 1993. He obtained his Ph.D. of Engineering Science (ENSTA Bretagne, France) in 2019 and the M.Sc. degree in renewable energy and energetic system in 2016 from University of Hassan II Casablanca. Morocco.  Currently he is working as temporary teaching and research assistants (ATER) at university of Bordeaux France and institute of Mechanics and Engineering (I2M). His main research is currently focused on composites materials, nanotechnology, 3D printing, renewable energies and renewable marine energies.

He is member of the French Society of Metallurgy and Materials (SF2M), President of the Innovation and Renewable Energy Development Club at the Faculty of Science Casablanca, and he is member of the Scientific and Technical Committee of the World Academy of Sciences, Engineering and Technology (WASET). His research results have been crowned by several prizes notably that of the first prize of the French navy in France, Category engineering sciences, in 2017. And the second prize of the university competition for research and innovation “CURI 2017” in Morocco

Mostapha TARFAOUI was born in BenSlimane, Morocco, in 1967. He obtained his PhD of Engineering Science (Faculty of Science, University Haute Alsace, France) in 1999 and M.S. Physics and Applications (Faculty of Science, University Haute Alsace, France) in 1993. After receiving the PhD degree, he joined the National Institute of Advanced Technologies of Brittany (ENSTA Bretagne), Brest, France, as a Professor of mechanics and materials. His main expertise is focused on the composite and nanocomposites materials behaviour and composite materials for renewable marine energy. This includes the static and dynamic responses involved in the shipbuilding structures to finite element analysis.

He has expertise in Dialogue test/calculation in the heterogeneous structures relationships and numerical modelling. His research activities articulate around the development of experimental, theoretical and numerical approaches for a better description of the elastic behaviour of damaged composite/nanocomposite material under dynamic loading in terms of dynamic response and damage kinetic.

The hotline of this work is the comprehension of the appearance and the evolution of damage. This comprehension aims to better describing, simulating and optimizing the macroscopic behaviour of composite materials by multi scales approaches and by integrating different aspects of their microstructure. For this objective, his research tasks are undertaken by developing two complementary approaches jointly: the experimental investigation and multi scales modelling of the mechanical behaviour. These two approaches were enriched by a third orientation. This one relates to the numerical developments of algorithms aiming at implementing the behaviour laws in structures computer codes by using finite elements method. These laws are developed for the modelling of the dynamic response, the produced damage and residual strength and/or are identified directly through experimental and numerical procedures. He is member of the Organization committee and Scientific committee of the international associations. He is a reviewer of international scientific journals. For these different research projects, Professor TARFAOUI has been awarded several prizes.

Go To Composites Part B: Engineering