The impinging jet is defined as a high-velocity jet of cooling fluid forced through a hole or slot which impinges on the surface to be cooled, and results in high heat transfer rate between the wall and the fluid. Impinging jets can be classified as a submerged jet or a free jet depending on the density and nature of the fluid issuing the jet. They are widely used in industrial processes, since high heat and mass transfer coefficients can be attained. Unfortunately, their complex flow physics are difficult to numerically simulate and depend on a large number of parameters. In essence, literature has it that the flow field in an impinging jet issued from a converging nozzle is characterized by a free jet region, an impingement or stagnation region and a radial wall jet region. These parameters have been widely studied. In fact, recent publications have reported of a secondary heat transfer coefficient peak, which is the result of local thinning of the boundary layer thickness due to the generation of secondary vortices by impinging toroidal (primary) vortices that are created in the free jet. So far, little is known about the interaction between the primary and secondary vortices. In addition, very little can be found regarding the effect of impinging jet pulsation on the flow field characteristics in the wall jet and impingement region and the resulting heat transfer characteristics.

In other words, their work focused on assessing the effect of impinging air jet pulsation on the generation of toroidal (“primary”) vortices near to the nozzle exit, their subsequent downstream evolution, the creation of “secondary” vortices and their interaction along the radial wall jet. To realize this, the researchers performed experiments using particle image velocimetry. Data analysis was based on the determined instantaneous vorticity and swirling strength fields.

The authors reported that jet pulsation significantly affected both the primary and the secondary vortex numbers, areas, and strengths. However, the actual change in vortex strength was seen to depend on the phase and the jet Reynolds number. Secondary vortex strengths were seen to increase up to twice the value obtained for the steady jet case. Nonetheless, no enhancement was measured when the Strouhal number exceeded 8.5×10−3.

In summary, the study investigated the effect of jet pulsation on primary and secondary vortices generated by an impinging round jet (H/D = 2.0) at three different Reynolds numbers ranging from 4606 to 13,513. Measurements were performed by planar PIV covering the wall jet up to r/D = 6.5. Based on conditional sampling of the presented data set, one could conclude that secondary vortex generation for the pulsating jet is similar as for the steady jet case. In a statement to Advances in Engineering, Professor René van Hout highlighted that based on their results, jet pulsation had a significant effect on primary and secondary vortex strengths, numbers, and areas both in the free jet (just before impingement) as well as in the radially expanding wall jet. The effects can be linked to changes in the heat transfer characteristics measured in a prior study. 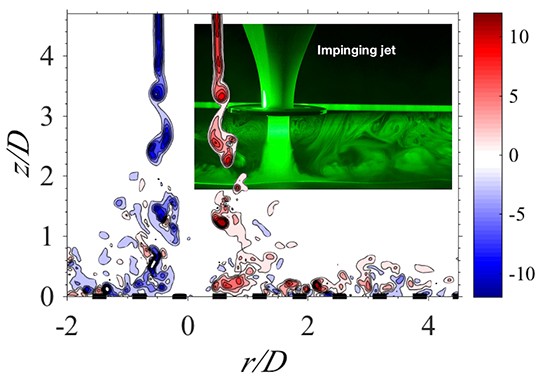 Dr. René van Hout is an Associate Professor at the Faculty of Mechanical Engineering at the Technion – Israel Institute of Technology and is the head of the Environmental Multi-Phase Flow Laboratory (EMPFL). He has been active in the field of heat transfer and fluid dynamics since 1990. Most of his early research has been in experimental multi-phase flows, starting with gas-liquid flows and more recently solid-fluid flows. Current research focuses on particles (solids, drops and bubbles) in turbulent flows, vortex induced vibrations of tethered structures in uniform flows, canopy flows as well as heat mass transfer by impinging (transient) jet flows. He is a leading expert on experimental techniques for the measurement of particle-turbulence interactions. Together with his graduate students and laboratory research assistant, techniques such as digital holography and (tomographic) – Particle Image Velocimetry are further developed and adapted for fluid-particle/structure interactions.

Dr. Moti Raizner is a Director of Thermal & Flow Analysis Team at RAFAEL – Advanced Defense Systems Ltd. He has been active in the field of heat transfer and fluid dynamics since 2007. He is a specialist in thermal solutions for military electronics systems. Dr. Moti Raizner received his BSc., MSc. and PhD in Mechanical Engineering from the Technion – Israel Institute of Technology.

Go To Int. J. of Heat and Fluid Flow