Cobalt and nickel are two fascinating ferromagnetic metals that share a myriad of attributes. As such, the two have been widely used in various fields, where a combined application has been recently reported in the formulation of advanced materials. Ideally, due to their similar physico-chemical properties, cobalt and nickel have been observed to always coexist in nature (together with other metals, such as magnesium, iron, aluminum – among others); particularly in laterite ores. Consequently, separating this mixture often calls for an intricate procedure that involves acid leaching, where chloride leaching is most preferred. However, the resulting solution contains minor residuals of other metals that impurify the cobalt/nickel extract. Various approaches have been presented, most of which deal with separation of impurities from synthetic solution especially in sulfate systems. Unfortunately, none has reported on the utilization of industrial feed solution, specifically that of chloride.

Recently, Tongren University researchers namely Dr. Jun Chang, Dr. Fukang Jia and Dr. Xiaohong Yang from the College of Material and Chemical Engineering in collaboration with Dr. C. Srinivasakannan from The Petroleum Institute at Khalifa University of Science and Technology and Dr. Kathryn Mumford from The University of Melbourne in Australia, focused on employing the IS-RPB in the separation process. In particular, their goal was to use the aforementioned system to maximize separation of contaminants, namely: manganese, zinc, copper, from an industrial chloride solution using D2EHPA– kerosene as extractant, so that nickel and cobalt could be recovered from the raffinate. Their work is currently published in the research journal, Chemical Engineering & Processing: Process Intensification.

Generally, the researchers assessed the effects of operating parameters such as equilibrium pH, ratio of aqueous to organic ﬂow rates, rotation speed and concentration of D2EHPA amongst other variables. The system used was the Impinging Stream–Rotating Packed Bed (IS–RPB) contactor in laboratory scale, and the main solvent extractor adopted was Di-2-ethylhexylphosphoric acid (D2EHPA).

The authors reported that the initial pH, concentration of extractant, ﬂow rate ratio and rotating speed had a significant inﬂuence on the extraction efficiency. To be precise, in excess of 99.9% of the zinc, manganese and copper could be extracted, with the raffinate concentration of zinc, copper and manganese less than 5 milligram per liter in a three-stage extractor.

In summary, Dr. Jun Chang and colleagues successfully developed a novel concept of a liquid-liquid extraction for separation of zinc, manganese and copper from the mixed chloride solution in IS-RPB using D2EHPA as the extractant. Results showed that, in the IS-RPB, the efficiency of mass transfer and two phases splitting were greatly improved and the process ﬂow was shortened as compared to mixer settler extractor. Overall, IS-RPB was identified as a new approach for strengthen macromixing efficiency and was a brighter prospect for industrial application in solvent extraction process. 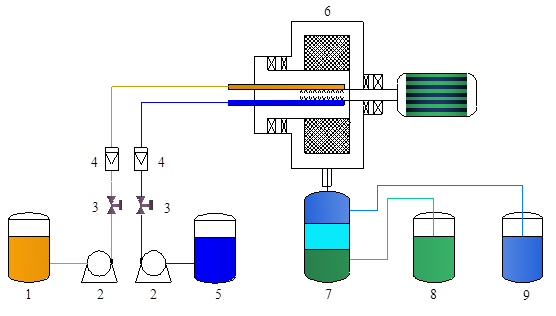 Dr. Jun Chang received his Ph. D. degree from Kunming University of Science and Technology at 2016 under guidance of Prof. Jing Chen (a Fellow of Chinese Academy of Engineering). During his Ph.D. study, he was involved as a student researcher in many research projects of hydrometallurgy funded by Chinese government and industries. In August 2016, he joined the College of Material and Chemical Engineering in Tongren University as an Associate Professor. He has been awarded a scholarship under the State Scholarship Fund for academic visits at the Department of Chemical Engineering at The University of Melbourne from March 2018 to March 2019.

His research interests are in the areas of intensified leaching, solvent extraction technologies and resource recycling. These interests range from the manufacture of novel reactors, to the development of novel reaction dynamic models to predict performance, and onto large scale implementation in the mining and waste water processing fields. He has accomplished more than 10 projects including programs from the National Natural Science Foundation of China, Guizhou province and Chinese manganese companies. He has published over 20 research papers, and holds 11 China invention patents. Now He as a reviewer for more than 20 peer-review journals.

Enabling molecular simulations of hydrogen persulfide in chemistry and biology