Titanium alloys exhibit excellent mechanical properties such as high tensile strength and toughness (even at extreme temperatures) and exceptional corrosion resistance. Unfortunately, due to the high manufacturing costs associated with these alloys, their use has been restricted to mainly military, aerospace industries and minimal biomaterial applications. Conversely, titanium alloys in clad materials possess weaknesses such as poor ductility and low electrical conductivity. Clad materials are highly valued in offshore plant industry; especially those materials made from conductive Cu-based alloys and corrosion-resistant Ti-based alloys, which are not affected by electrolytes and saline water. Currently, the roll-bonding method is the most common forming process for various clad materials since it is highly efficient and does not impose any restrictions on product length. Nevertheless, debonding may occur due to poor interfacial bonding during the forming/fabrication process.

Technically, the bonding strength in claddings depends on shear and surface deformation determined by the reduction ratio during rolling; a ratio that should be at least 60% so as to form materials with sufficient interfacial adhesion. Moreover, heat treatment is often required for as-rolled specimens that may contain insufficient formability due to residual stresses and work hardening. Therefore, to address the aforementioned challenges, researchers from the Chungnam National University in Republic of Korea: Yong Keun Kim, Hesam Pouraliakbar and led by Professor Sun Ig Hong proposed an in-depth assessment of a three-layered Ti/Cu/Ti clad materials fabricated using the conventional room-temperature roll-bonding process, by means of SEM and XRD patterns. Their work is currently published in the research journal, Materials Science & Engineering A.

The research team examined average intermetallic compound layers’ thickness of 1.34, 1.61, 2.39 and 5.39 μm, for as-rolled, 300, 500 and 700 °C annealed specimens, respectively, consisting of four different phases of CuTi2, CuTi, Cu3Ti2, and Cu4Ti. It is worth mentioning that the continuity, uniformity and thickness variation as well as the growth rate during treating for each layer was distinct. In their work, the researchers also conducted tensile tests so as to analyze the mechanical response of clad materials containing intermetallic compounds that were affected by post-processing thermal cycles.

The authors observed that the stress-strain curves depicted a decrease in strength and subsequent improvement in ductility as a result of annealing at 700 °C. Additionally, the SEM analyses revealed that cracks within intermetallic layers during tensile deformation emerged only in specimen annealed at 700 °C; however, it did not lead debonding or layer separation similar to other clad metals reported in literature.

In summary, the study demonstrated the excellent application of a roll-bonding method in the fabrication of Ti/Cu/Ti three-layered clad materials subjected to heat treatment cycles for purposes of studying the interfacial intermetallic compounds layer evolution. According to the obtained results and as the current research’s novelty, it is claimable that intermetallics formed in Ti/Cu clad materials would be more ductile comparing with other compounds reported for talented cladding metals in literature. In a statement to Advances in Engineering, Professor Sun Ig Hong highlighted that their results are expected to be applicable in determining the optimal temperature range for production along with utilization of Ti/Cu/Ti layered clad metals and to give better concept for deformation behavior of formed intermetallic compounds layers under further straining. 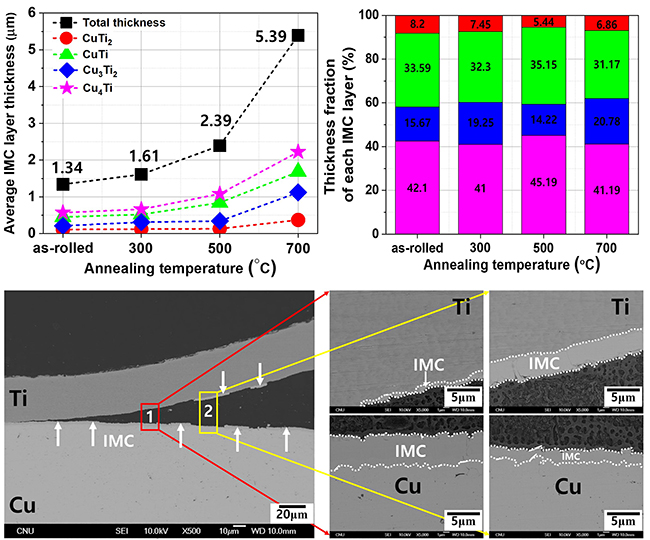 Go To Materials Science & Engineering A