Fluid mechanics have been widely applied in numerous industrial applications. However, the field has experienced immense challenges over time. For instance, the two-dimensional steady progressive wave have attracted significant attention of many researchers. Therefore, several techniques have been developed to solve the problem but most of them have serious limitations which limit their functionalities. To this note, the focus has shifted to developing more comprehensive solutions approaches to meet the emerging needs today.

Among the available techniques, analytical approaches like the perturbation methods have been frequently used having been proposed by Stokes in the mid-nineteenth century. The theory has gone under various modifications in an attempt to improve their efficiency and simplify it. Consequently, numerical solution approaches such as minimizing the mean-squared error in the dynamic and kinetic boundary conditions of the free surface have also been developed for the limiting Stoke wave. Unfortunately, most of these methods are not effective for application in extremely shallow waters. With the introduction of Fourier transforms in the numerical solutions, complex solutions have been handled with much ease even though the presence of singularities in the limiting Stokes wave appear challenging.

Presently, a solution of two-dimensional limiting wave problems in extremely shallow waters has not been fully explored. On the other hand, none of the analytical or numerical approaches can be used to solve these problems accurately. For instance, Pade Approximant relies on extrapolation that may not depict the true picture in most cases. Thus, researchers have been looking for alternative solutions for accurate solution of the two-dimensional limiting gravity wave in arbitrarily water depth without any extrapolations and have identified analytical approximation methods as a promising solution.

Recently, Professor Shijun Liao at Shanghai Jiao Tong University and Xiaoxu Zhong (currently a PhD candidate at Purdue University) developed a solution for the limiting Stokes wave in arbitrary water depth by using the renowned Homotopy Analysis Method (HAM). The HAM that was proposed by Prof. Shijun Liao in 1992 is an analytic approximation method for equations with high nonlinearity. Unlike the analytical and numerical approaches, this technique is independent of any physical parameter whether large or small due to the convergence-control parameter which enables the convergence of any solution series. Also, the free surface with a sharply pointed crest was represented using the Fourier series. They also solved the initially existing perturbation problems associated with the analytical and numerical methods. Their work is published in the research journal, Journal of Fluid Mechanics.

The authors observed that it was simpler to achieve the convergence of all the Fourier coefficients of the solution by selection of a desired proper convergence parameter. It also allows approximations of the initial solutions which was used in an iteration approach to accelerate the convergence rate. Furthermore, the convergence was achieved without having to use any extrapolation thus it was possible to realize accurate wave profile in relatively shallow water as compared to other methods.

Professor Shijun Liao and Mr. Xiaoxu Zhong have successfully developed a homotopy analysis method to solve the limiting Stokes wave in arbitrary water depth thereby overcoming the greatest challenges experienced by the initially used approaches. The study is hoped to advance the solution of various problems in fluid mechanics as well as other fields by enabling the creation of new approaches. 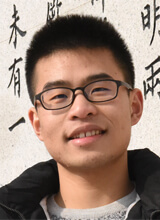 Xiaoxu Zhong received his B.S. degree in 2015 and M.S. degree in 2018 in ocean engineering from Shanghai Jiaotong University. He is currently a Ph.D. student in School of Mechanical Engineering, Purdue University, USA. He did research in many topics in nonlinear mechanics and applied mathematics, ranging from gravity waves to Von Karman plate, to capillary flows in tubes, to cavitation inception, and even to backward/forward-backward stochastic differential equations.

Shijun Liao is a scientist in nonlinear mechanics and applied mathematics who has done researches in many topics, ranging from gravity waves to boundary layer flows, to chaotic dynamic systems, to three-body problem, to analytic approximation methods for highly nonlinear equations, to reliable numerical simulations of chaos, and so on.

He is the founder of the homotopy analysis method (HAM), an analytic approximation method for highly nonlinear differential/integral equations that is independent upon small physical parameters and can guarantee the convergence of solution series and thus overcomes the limitations of traditional approaches.

Go To Applied Mathematics and Computation