The use of chromium nitride cannot be understated due to is superior chemical stability and oxidation resistance. There have been several research studies that involved the addition of metallic elements to this compound with few on the addition of oxygen. From these few research studies, it was noted that with an increasing oxygen content, there was an increase in hardness of Cr (N, O) thin films, though this could not be justified by any of the conventional hardening mechanisms. Recent studies have reported a sodium chloride-type epitaxial Cr0.67O thin film with a 44GPa hardness value, and a nanosized lamellar structure. This has led researchers to expect that the chromium oxynitride thin film will also have the same nano-lamellar structure.

In a recent research published in Thin Solid Films, Kazuma Suzuki and colleagues set out to investigate the nano-lamellar structure of Cr (N, O) grains through high resolution transmission electron microscopy, and presented these thin films as the first polycrystalline thin films that were hardened due to their structure.

Four thin film samples with different oxygen contents were made on single crystal silicon substrates using pulsed laser deposition. An analysis was conducted on the thin film composition, and nano-indentation was used to measure the hardness. X-ray diffraction was then used to study the thin film crystal structure patterns at room temperature and 83K.

In the X-ray diffraction analysis at room temperature, the authors noted that all samples included a sodium chloride-type structure phase based on chromium nitride, and peaks which were due to the chromium oxide phases were not observed. This shows that either the thin films did not include the oxides, or they were included at a fraction not easily detectable. It was further observed that a rise in oxygen content resulted in the broadening of the sodium chloride-type peaks.

One of the samples was observed to have a single-phase grain with no stacking faults indicating that it did not form a nano-lamellar structure. The other three samples however exhibited electron diffraction patterns which were similar to Cr0.67O, and this suggests that they have both the sodium chloride and corundum-type phases, with a similar orientation as Cr0.67O thin films.

It was expected that the structure was formed due to a cooperative phenomenon which includes Jahn-Teller structural ordering or martensitic transformation. However, further tests at 83K of one of the samples showed that upon cooling, the sodium chloride-type phase in the film did not change to a tetragonal phase. 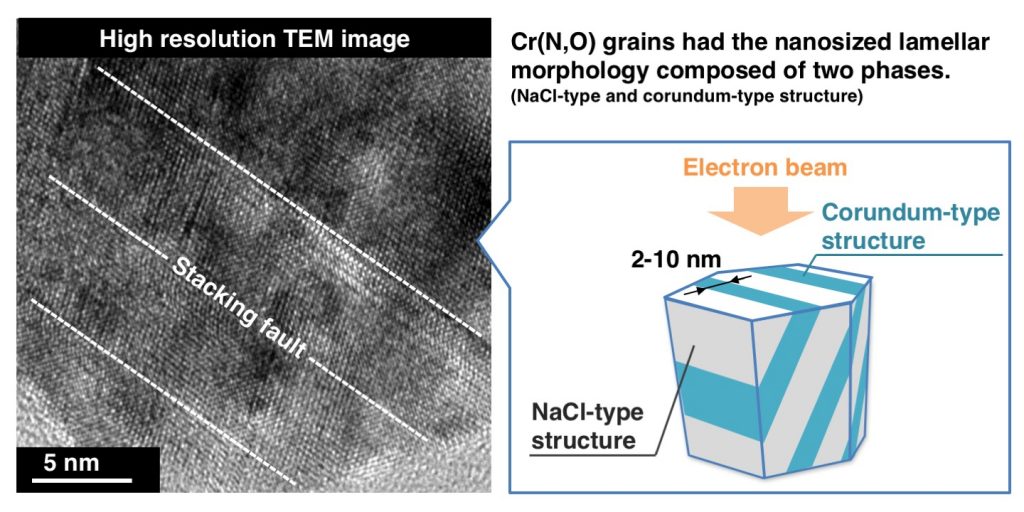 Dr. Suematsu is a professor of Extreme Energy-Density Research Institute, Nagaoka University of Technology, Nagaoka Japan. His research interests include synthesis of novel materials in pulsed plasma, with organic matter and under high pressure.

Prof. Suzuki was born in 1971 and is an associate professor at Nagaoka University of Technology. He has been engaged in research on transition metal nitrides/oxynitrides since his PhD student years, and hard thin films are his main theme. Besides this, he specializes in novel synthesis of spintronic material and composition analysis of thin film by electrostatic accelerator.

Dr. Kazuma Suzuki, I am an Assistant Professor in National Institute of Technology, Sendai College, Japan. I was born in Sendai, in 1989. I received my Ph.D. degree in Engineering from Nagaoka University of Technology, Japan in 2016. My main research interests are mechanical and electrical properties, crystal structure, electronic states and microstructure of 3d transition metal compounds.