For applications in high-frequency blue and ultraviolet wavelength spectrum, Gallium nitride (GaN) is widely used, because it has wide band-gap, high carrier mobility, high saturated electron drift velocity, and high breakdown field. However, GaN is a hard material and is chemically inert. This makes it difficult to obtain crystals with high-quality surface and produces crystals with more lattice defects.

For providing global planarization, a surface smoothening process known as Chemical Mechanical Planarization (CMP) is employed—a technique originated from glass polishing. CMP process response variables, material removal rate (MRR) and root mean square (RMS) are controlled by many factors including but not limited to slurry pH, oxidizer concentration, abrasive concentration, carrier down pressure, and platen velocity. While past studies—focused on various abrasive particles—showed success in planarization to defect-free GaN surface, the recent studies indicate that MRR for alumina (Al2O3) containing slurry is higher than that of silica (SiO2) containing one. However, SiO2 based slurry produced relatively better surface quality in terms of RMS.

Dr. Das and his graduate students (Durga and Khushnuma) from the University of Hyderabad in India and Dr. Jayaraman from the University of Michigan in Dearborn US, primed the CMP process–parameters of c-plane GaN in potassium-permanganate (KMnO4)/Al2O3 slurry, adopting Taguchi-based grey relational analysis in order to achieve an optimal combination of MRR and RMS.

The Taguchi-based experimental design followed by grey relational analysis was preferred for the optimization of CMP process-parameters of c-plane GaN. In traditional experimental techniques, commonly, one parameter is varied at a time while keeping other parameters constant and, this way many experiments are required to be performed that leads to complexity and increase in the cost of experiments. Alternatively, the Taguchi method not only reduces the number of experiments to be performed but also reduces the time and the cost. Signal to noise ratio (S/N) is employed to measure the performance response in Taguchi method. MRR and RMS were the two response variables of CMP process, chosen for the study. ‘Larger is better’ and ‘Smaller is better’ were chosen to obtain the performance characteristics for MRR and RMS respectively.   Traditional Taguchi experimental design is not suitable to optimize multiple responses simultaneously. To overcome this, Taguchi experimental design was coupled with Grey Relational Analysis (GRA).

In GRA, a single response function (grey relational grade—GRG) was obtained from the conversion of the two response variables (MRR and RMS) and, GRG was maximized.  The strongest influence on the GRG was the slurry pH. Experimental results corroborated with the predicted results and the optimal combination of CMP process-parameter for polishing c-plane GaN were: slurry pH – 2, an oxidizer (KMnO4) concentration – 0.3 M, abrasive (Al2O3) concentration – 2.5%, down-pressure – 38 kPa, and platen RPM – 90. And the other parameters viz. slurry flow rate, carrier velocity etc. were maintained constant.

This study establishes that for a KMnO4/Al2O3 slurry, adopting optimal CMP processing conditions, an RMS as low as ~22 nm (over the scan area ~0.70 x ~0.96 mm2) can be achieved while maintaining a relatively high MRR ~142 nm/hr, for polishing c-plane GaN.

Durga M. Nelabhotla obtained M.Sc. in Chemistry from the University Of Madras and M. Tech. in Nanotechnology from Jawaharlal Technological University Hyderabad, India.

His research interest covers polymer nanoparticles, froth flotation in mineral processing, green chemical synthesis, and chemical mechanical planarization of WBG semiconductors. He has published research papers in refereed journals and conference proceedings and has presented his research work in various national and international conferences. Durga can be reached at   [email protected]. 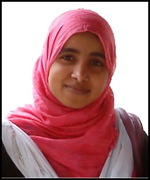 Khushnuma Asghar obtained M.Sc. in Physical Chemistry and M. Tech. in Nanotechnology from Aligarh Muslim University, India. Currently, she is pursuing Ph. D. in Materials Engineering in the School of Engineering Sciences and Technology (SEST) at the University of Hyderabad, India under the supervision of Prof. Dibakar Das. Her research interest covers magnetic nanocomposites, functional nanomaterials and chemical mechanical planarization of WBG semiconductors.

She has published several research papers in refereed journals and conference proceedings and has presented her research work in various national and international conferences. Khushnuma can be reached at [email protected].

Tanjore V. Jayaraman received his doctoral degree from the University of Utah in 2007. He is currently an Assistant Professor in the Department of Mechanical Engineering, at the University of Michigan in Dearborn, US.

His area of research interests includes but not limited to, magnetic materials, advanced materials and processes, nanoscience and technology, corrosion, and materials selection & design. Dr. Jayaraman can be reached at [email protected]

Dr. Das is an elected fellow of the Indian Institute of Ceramics (IIC). His work on chemical mechanical planarization (CMP) won 2008 R&D 100 award for invention on CMP Slurry for Polishing Wide Band Gap Semiconductors, 2009 Frost & Sullivan North American Excellence in Research of the Year Award in the field of advanced semiconductor surface modification.

Droplet size measurements inside a Venturi