Subsea production systems have become critical with the rapid increase in oil and gas production from deepwater offshore fields. These systems consist of connectors, pipelines, risers and other equipment and facilities required to operate the wells. Unfortunately, the applicability of these systems in deeper and remote oil fields like those located in arctic areas remains a big engineering challenge, especially in ensuring the connectors’ reliability, safety, and long service life. Therefore, developing effective subsea oil production technologies will be of great benefit in maximizing production, reducing environmental effects and reducing the associated capital and operational expenditures.

Subsea connector plays a vital role in subsea production systems as they ensure sealing and locking between the two subsea facilities. Failure of these connectors might lead to oil and gas leakages that might impact not only the safe operation of the systems but also the environment. Due to the increasing amount of studies on the sealing working principle of subsea connectors, theoretical designs of different components of subsea connectors, such as gaskets, have been presented. Another key connector component that has recently drawn research attention is the hub because it works with the gasket to achieve the desired sealing performance. Thus, studying the design of the hub structure, including its geometric dimensions, marks an important step toward improving the locking and sealing performance of subsea production systems.

ASME-VIII design method is one of the most used methods in designing flanges and various connector components. Though it provides an easy solution to the mechanics analytical model, it is not suitable for designing hubs due to the inadequacies in the analytical model approximations that might result in erroneous deviations. Other methods such as flange stress analysis are also not suitable due to several limitations. It is worth noting that addressing these difficulties associated with the design of the thick-walled hub structure for the connectors requires a feasible and robust method for solving the axisymmetric bending deformation problem.

Herein, Professor Menglan Duan and Dr. Kang Zhang from China University of Petroleum in collaboration with Professor Carlos Soares from the University of Lisbon and Professor Jeom Paik from Pusan National University conducted a detailed theoretical investigation of the design problems of the parameters of the hub structure of the subsea. In particular, a novel analytical model named the stress analytical method was developed. The hub structure was divided into two: a hollow annular plate and a thick-walled cylinder, and the axisymmetric bending deformation of the thick-walled cylinder was proposed. Finally, the feasibility of the analytical method was validated through a finite element method, and a case study was carried out to compare the stress results with the ASME design method. The work is currently published in the research journal, Thin-Walled Structures.

The research team established the deformation continuity relationships between the hollow annular plate and the thick-walled cylinder as well as the analytical solutions of the displacements, stress components, internal forces and rotational angles with high precision using the present method. This was attributed to the effective development of the geometric, constitutive, physical and equilibrium equations to determine the displacement analytical solution of the thick-walled cylinder structure of the hub considering the effects of the wall thickness. Consequently, the axisymmetric bending deformation problem of the thick-walled structures was solved under the action of edges. Compared with the ASME design method, the presented method obtained more detailed results and could inspect the weak points of a certain section by determining the stresses along the entire section.

In summary, the study reported an analytical model to solve the axisymmetric bending deformation problems of connector’s thick-walled hub structure under the action of edge shear and bending forces. Using the hoop and axial stresses as comparison indexes, the stress value of the weak point calculated by the proposed analytical method was in good agreement with the finite element method results when the ratio of the outer and inner diameter of the thick-walled cylinder ranged between 1.5 to 1.8. In addition, this model was more accurate in predicting the hoop and axial stresses. In a statement to Advances in Engineering, Professor Menglan Duan said the study findings would significantly enhance the operation reliability and safety of offshore oil and gas production.

Professor Menglan Duan is Dean of College of Safety and Ocean Engineering at China University of Petroleum-Beijing (CUPB) where he obtained his PhD in 1993. He ever worked at the Institute of Mechanics of Chinese Academy of Sciences, China Classification Society (CCS), University of Rochester, before joining the CUPB in 2006.

He conducted about 200 projects and built a group of about 20 staff members in ocean engineering at the CUPB. He also authored 147 SCI indexed journal papers of 3803 citations and h-index 25. His contributions to and leadership in ocean engineering community were recognized by the 2020 SOBENA Awards of Excellence, the 28th International Congress of Waterborne Transportation, Shipbuilding and Offshore Constructions, and the 2012 Fellowship Award, Society for Underwater Technology.

In relationship to oil/gas of fixed and mobile platforms, subsea pipelines and risers, subsea production systems, and to offshore renewable clear energies, his interest covers a wide range of the following areas:

He was also recognized by the academic titles as below:

Dr. Kang Zhang is a senior engineer of China Ship Scientific Research Center. He received his Bachelor’s degree in Safety Engineering from Zhengzhou University in 2011. He then received his PhD degree in China University of petroleum-Beijing in 2017. His current research aims at investigating the sealing behavior of the metallic gasket of subsea jumper’s connectors during the compression deformation process with theoretical descriptions. His research interests include safety and risk assessment in ocean engineering, structural design of subsea production system, system design and reliability analysis, quality and reliability engineering. 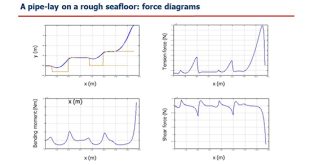