Previous studies evaluating the potential of reducing energy use and greenhouse gas emissions associated with the ethylene industry are not specifically for the United States, and most of them do not include prospective estimation for the future. In addition, most of these studies focused on direct energy use and emissions without broader consideration of the indirect (or upstream) energy use and greenhouse gas emission associated with the extraction refining and distribution of ethylene plant feedstock.

Based on the results, given current practices and technologies, the primary energy consumption and greenhouse gas emissions of the U.S. ethylene industry will greatly increase. The impact can be mitigated by adopting the state-of-the-art technology, but the mitigation is not large enough to cancel out the increase of energy consumption led by capacity growth. The adoption of emerging technologies can further reduce energy and greenhouse gas emissions, however, the reduction potential is subject to the uncertainty of technology performance. The authors suggest the inclusion of reducing uncertainty in future R&D work to enable more robust prospective analysis. Among five emerging technologies, catalyst-assisted production and microwave-enhanced cracking technologies applied to steam cracker tend to have larger savings than the other three technologies. The results also show that in the short term, catalyst-assisted production technology is more favorable regarding energy reduction, however, in a long-term, microwave enhanced cracking may have greater potential especially given that it is powered by electricity and thus can be integrated with renewable power generation in the future. The selection of technology should be considered on a case-by-case basis as the appropriateness and potential of each technology depends on the reduction target (e.g., short-term or long-term), resource availability and cost (e.g., the availability of catalyst feedstock and electricity cost), and investment costs, all of which will vary by plant. However, the model and the general results presented in this study can still provide a good reference for decision making in technology investment.

Another major  implication of this research is that faster commercialization of emerging technologies can bring more reductions of primary energy consumption (5-38% more cumulative energy savings) and more mitigations of greenhouse gas emissions (7−33% more reduction in the high fugitive emissions scenario and 2−25% more reduction in the low fugitive emissions scenario)  in near future, and reduce the risk of diminishing mitigating potentials for greenhouse gas emissions caused by possible high fugitive emissions in the future. This implication is critical for policy makers, investors, manufacturers, and analysts who question whether intensive efforts to bring technology to market faster are worthwhile. These stakeholders can use the results shown in this study to support decision making, to assist further economic analysis, or to enhance strategic planning related to investments in emerging technologies. 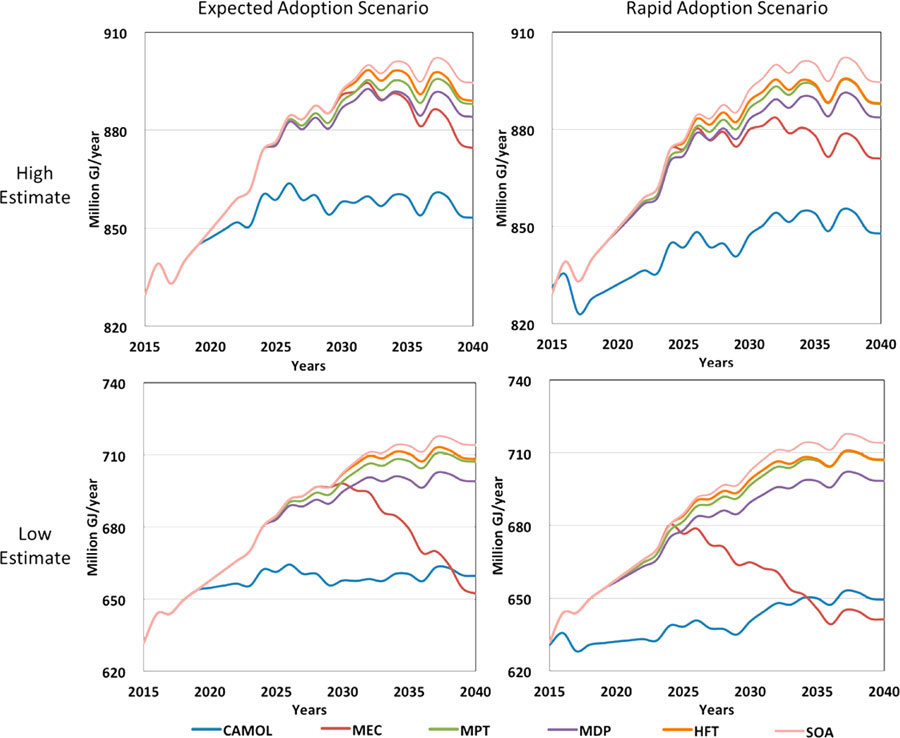 Dr. Yuan Yao is an Assistant Professor of Sustainability Science and Engineering at Forest Biomaterials Department in North Carolina State University.  Her research is motivated by the increasing need of sustainable engineering that can support industrial development without compromising the environment or depleting the resources for future generations.

She received a B.S. in Metallurgical Engineering from Northeastern University, China, in 2011. Then she joined Energy and Resource System Analysis Laboratory at Northwestern University, where she received a Ph.D. in Chemical Engineering in 2016. During that time, she was selected to the program of Management for Scientists and Engineers from Kellogg School of Management.

During her career at Argonne, she also conducted numerous process evaluation, design, economics, systems, and market studies of materials and nuclear fuel recycling technologies. Diane earned her B.S. in Chemical Engineering at Purdue University and PhD in Chemical Engineering at the University of Cambridge. Before joining Argonne, she worked at Amoco Chemical Company in process development, design, economics, technical service, and commercialization of petrochemicals.

Dr. Matthew Riddle is an Assistant Energy Scientist in the Center for Energy, Environmental and Economic Systems Analysis at Argonne National Laboratory.  His research interests focus on agent-based modeling and other computer simulation techniques to model complex energy and economic systems, and in methodologies for designing simulation experiments and processing simulation results. He has applied his research to studying critical materials markets and supply chains, advanced manufacturing technologies, and building energy use models.

Dr. Riddle received a B.A. in Mathematics from Carleton College and a Ph.D. in Economics from the University of Massachusetts.

Joe Cresko is currently a Technology Manager in DOE’s Advanced Manufacturing Office (AMO), where he leads strategic technology analysis, and where he has been leading efforts to assess the life cycle and cross-sector impacts of manufacturing advances.  Most recently he has lead the authorship of the DOE’s Quadrennial Technology Review (QTR) chapter on Manufacturing and fourteen associated Technology Assessments.  Joe has also served at DOE as an Engineering Sciences Fellow for the Industrial Technologies Program, and a Science & Technology Policy Fellow in the Office of Energy Efficiency & Renewable Energy, and supporting the Office of Policy & International Affairs.

Prior to serving at DOE, Joe was the Director of the Emerging Technology Applications Center (ETAC), helping manufacturers to improve their energy efficiency and environmental footprint through industrial energy efficiency assessments and applied R&D.  He is an expert in the application of electrotechnologies for materials processing and manufacturing innovations, including microwave, radio-frequency, induction, UV and electron beam technologies.

Joe has a long history of applied research & engineering, manufacturing efficiency improvements and green process development, and has performed research, analysis and technology transfer for the aerospace, ceramics, polymer, composites, foundry and food manufacturing industries.  He has published more than a dozen related papers, chaired conference sessions, and is a member of the Microwave Working Group that has successfully organized five World Congresses on the science and applications of high frequency heating.

Dr. Eric Masanet is an Associate Professor in the Departments of Mechanical Engineering and Chemical and Biological Engineering at Northwestern University.  After receiving his M.S. in mechanical engineering from Northwestern, he spent several years as a practicing design and manufacturing engineer. During that time, he became interested in the intersections between manufacturing, sustainability, and public policy.  He returned to graduate school to pursue research in these areas at UC Berkeley, where he received a Ph.D. in mechanical engineering in 2004. He subsequently spent eight years at the U.S. Department of Energy’s Lawrence Berkeley National Laboratory (LBNL), where he most recently held the positions of Staff Scientist and Deputy Leader of the International Energy Studies Group.  While at LBNL, he also held a joint research appointment at UC Berkeley, where he served as Program Manager of the Engineering and Business for Sustainability Graduate Certificate program.

He previously served as Editor-in-Chief of Resources, Conservation and Recycling, the leading peer-reviewed journal on materials and resource systems efficiency.  He also served as program co-chair of the International Society for Industrial Ecology Conference (2011) and the IEEE International Symposium on Sustainable Systems and Technologies (2008-2010).