Polyimide (PI) is one of the most widely used polymers in space environment because of its superior physical and chemical properties such as thermal stability and dielectric properties. However, it has been well known that PI can be seriously eroded by atomic oxygen (AO) in low earth orbit (LEO) environment. The best way to protect PI is via the preparation of PI composites and surface coatings. The former however affects the mechanical properties of PI while the latter are subject to cracking and peeling. As such, development of composite materials with self-passivation ability in the AO environment is another advantageous approach, which can be achieved by adding polyhedral oligomeric silsesquioxane (POSS) to polymer chain to form an organic-inorganic copolymer. Existing literature has shown that POSS-PI copolymers have good durability against hyperthermal AO attacks and can be recommended as an ideal alternative to spacecraft exteriors in low earth orbits. Therefore, combining the innovation and attractiveness of POSS with the functionality of traditional fillers will be a good choice to save costs and improve filler performances.

Such an approach has the potential to improve the compatibility and dispersibility of inorganic fillers in organic polymers. Further, the coated filler is economically interesting because of the possibility of covering a relatively cheap and easily obtainable filler with a thin layer of expensive material. Drawing from such ideas of modifying filler surfaces with a small amount of expensive material, researchers from the Yantai University in China: Can Xu, Zhiming Gao, Dr. Yun Guo, Ming Shu and led by Professor Yuan Gao developed a new method where they prepared a thin POSS transition layer on the PI surface by an in-situ deposition process. Their aim was to save costs in addition to solving the problem that: excessive addition of POSS to polymer affects the mechanical properties of samples directly. Their work is currently published in the research journal, Colloids and Surfaces A.

In their approach, a Kapton substrate was first treated under hydrothermal condition with low concentration NaOH to remove the passivation layer and produce a −COO− group. Next, the substrate was placed in the starting materials of POSS to form an in-situ deposited layer on the Kapton surface. Finally, a SiO2 coating was prepared on the POSS layer by a sol-gel method.

Ideally, POSS having organic and inorganic performances was used as a transition layer between SiO2 coating and Kapton substrate to enhance the interface adhesion and relieve the cracking and falling off of SiO2 coating. The authors reported that after 6 h AO irradiation of 5.0 eV average energy and 1.53 × 1016 atoms cm−2s−1 beam density, the erosion yield was 3.61 × 10−24 cm3 atom−1 for Kapton and 0.13 × 10−24 cm3 atom−1 for SiO2/POSS/Kapton, which was only 3.6 % as that of the Kapton.

In summary, the study demonstrated the use of POSS as a transition layer to enhance the adhesion between SiO2 coating and polyimide (Kapton) film in order to solve problems such as cracking and peeling of coatings. It was seen that the use of a low concentration of NaOH solution to remove the passivation layer in the Kapton surface, was beneficial to the newly formed carbonyl to react with the amino group. In a statement to Advances in Engineering, Professor Yuan Gao highlighted that their approach resulted in excellent anti-AO property that is crucial for space applications. 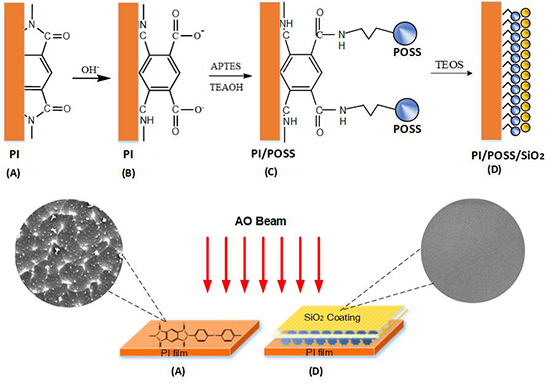 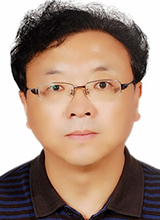 Dr. Yuan Gao is a professor at Yantai University in China. He received his bachelor and Ph.D. degrees from Dalian University of Technology and Lanzhou University in 1990 and 2003, respectively. From 2003 to 2005, he was a post-doc at Lanzhou Institute of Physics, China Academy of Space Technology.

His research interests are in the field of surface modification of materials and preparation of micro-nano materials. He hopes to elucidate the mechanism of coating cracking and interface peeling in space environment. His ultimate goal is to develop preparation methods for protective coatings on the flexible polymer surface that can be used in space, display screens and other fields.

Go To Colloids and Surfaces A