Among the available amorphous magnetic materials, heavy rare earth-transition metal alloys films have attracted significant research attention owing to theirexcellent properties that make them good candidates for current applications such as spintronic devices. In particular, GdFeCo exhibits perpendicular magnetic anisotropy, and its magnetic properties can be tuned by varying the composition due to the antiparallel configuration of the Gd and FeCo sublattice moments. As such, GdFeCo structures and its alloys have been identified as promising candidates for various applications, including high-density magnetic random-access memories and in the study of spin-motive forces. This can be further attributed to magnetically soft properties and moderate perpendicular magnetic anisotropy. To date, several models have been proposed to explain the physical origin of the perpendicular anisotropy in amorphous RE-TM alloy. Unfortunately, thermal related magnetic properties of amorphous GdFeCo alloy films have not been fully explored in literature.

To this note, a team of researchers at the East China University of Technology, led by Professor Ke Wang, carried out a systematic investigation of the thermal degradation behavior of amorphous GdFeCo alloy films with perpendicular anisotropy. Their work focused mainly on the thermal related magnetic properties in the high-temperature regions. The work is currently published in the research journal, Materials Science and Engineering.

In their approach, the GdFeCo films with good perpendicular magnetic anisotropy were fabricated by sputtering a composite target method. Thermomagnetic measurements were used to determine the compensation and Curie temperatures. Also, the effects of temperature on the thermal degradation as well as perpendicular magnetic anisotropy of the GdFeCo alloy films were investigated. “GdFeCo alloy film is one of the promising ferrimagnetic materials for spintronic devices. However, the amorphous structure is thermodynamically metastable, which may lead to the severe deterioration of the key functional properties during heating. Our work is to investigate the degradation mechanism of the GdFeCo alloy films. We aim to provide some useful information for the GdFeCo-based spintronic devices particularly used in high temperature region,” Prof. Ke Wang explains.

Based on their findings, a perpendicular magnetic anisotropy or about 105 erg/cm3 in magnitude was achieved. The authors confirmed that the films are Gd-dominant as indicated by the polarity of extraordinary Hall and magneto-optical Kerr loops and confirmed through thermomagnetic measurements. The compensation and Curie temperatures of approximately 98°C and 230 °C respectively, were also achieved. Moreover, a significant increase in the magnetization property, also believed to be the crystallization temperature, was achieved at 450 °C. Annealing temperature and crystallization were among the factors observed to affect the thermal degradation behavior of amorphous GdFeCo films. For instance, perpendicular magnetic anisotropy was observed to degrade rapidly with an increase in the annealing temperature. Additionally, X-ray diffraction revealed that films annealed above the crystallization temperature resulted in a reduction in the magnetization property. Furthermore, pronounced changes in the sheet resistance of the films, observed in the high-temperature region, were in line with the structural changes.

In summary, the study investigated the thermal degradation behavior of amorphous GdFeCo films. The authors successfully fabricated amorphous GdFeCo films with perpendicular anisotropy by sputtering a composite target. Different factors affecting the thermal degradation behavior, including annealing temperature and crystallization, were discussed. In a statement to Advances in Engineering, Professor Ke Wang said their study provides useful insights about GdFeCo films that can be used in the state-of-the-art device fabrication. 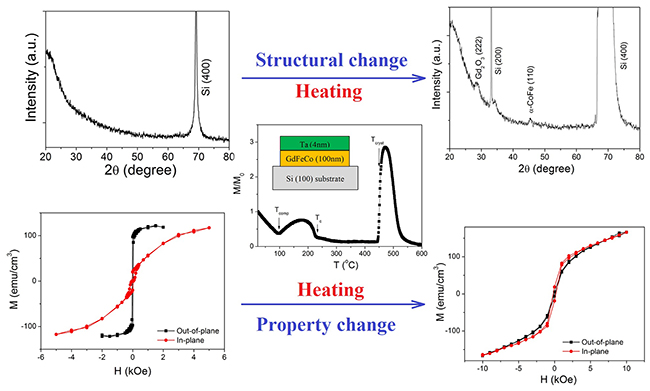 Prof. Ke Wang  received his PhD degree in Microelectronics and Solid State Electronics in 2000 from Huazhong University of Science and Technology (HUST). His research expertise lies in the areas of magnetic/optical/electronic thin films and devices, particularly for information storage. He previously received Alexander von Humboldt (AvH) research award to carry out his work in RWTH-Aachen. Currently, he is heading the School of Mechanical and Electronic Engineering at the East China University of Technology (ECUT).

Prof. Wang serves as Editorial Board Member for over ten scientific journals, and as Chair and/or Editor for several conferences. He has published more than 70 peer reviewed papers and holds several patents.

Go To Materials Science and Engineering